NO TIME TO DIE
Surprisingly, No Time to Die seems almost a misnomer, as at nearly three hours and several delays, there seemed to be plenty of time to die. The twenty-fifth entry in the James Bond franchise also marks the farewell for actor Daniel Craig in the role. I confess to finding the Craig Era Bond films a series of horrors. Apart from Casino Royale, I have hated every film our dour 007 has been in.
Sadly, No Time to Die has not shifted my view on this era.
James Bond (Daniel Craig) has retired from MI6 with his new lady-love, Madeleine Swann (Lea Seydoux). Madeline, however, has a secret: she is the daughter of a criminal mastermind employed by SPECTER. As a child, she witnesses her mother's killing at the hand of a Noh-masked villain. Said Noh-masked villain decides to save her from drowning in the ice rather than take his Madame Defarge-like revenge on the family.
Five years after James and Madeline separate for their own protection, a Russian scientist is kidnapped in a daring raid on a lab. He was involved in Project Heracles, a way to weaponize nanobots to target specific people for assassination via a virus. The virus would kill the intended target but not harm others with the target's DNA. James is asked by his CIA counterpart Felix Leiter (Jeffrey Wright) to help him find the scientist. Bond at first declines, but is lured back due to Nomi (Lashana Lynch), the new 007.
Soon, Bond is bouncing from Cuba where he works with "novice" CIA agent Paloma (Ana de Armas) and survives an assassination plot and back to Britain, where with a little help from Q (Ben Whishaw) and Miss Moneypenny (Naomie Harris) he reencounters his nemesis, Blofeld (Christoph Waltz). 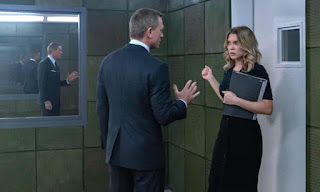 That, however, is not the end of things, as the real villain soon emerges from the shadow: Lyutsifer Safin (Rami Malek), the man who killed Madeleine's parents and now has set his eyes on Bond, Madeleine and Madeleine's daughter (who is curiously enough five years old).
It's a race to Safin's lair, where Bond must both stop Safin's dastardly scheme and rescue his two Bond Girls. It's a mission where not everyone survives.
I don't know whether this is important or not, but it takes approximately half an hour for the title theme to play. That means that the both the introduction to Madeleine's childhood and her relationship with Bond takes up a good chuck of time. My view is that all that could have been wrapped up in ten minutes at the most. Worse, I found that the post-opening theme scene would have worked better as the action-packed pre-credit scene than the very long one we ended up with.
That is one of No Time to Die's greatest flaws: there is simply no reason for this film to be nearly three hours long. For comparison, the action films F9, Godzilla vs. Kong, Black Widow and Shang-Chi and the Legend of the Seven Rings all have shorter running times. Even the epic remake of Dune is shorter.
There is a bloat to No Time to Die, where entire scenes could have been trimmed or cut altogether. Everything involving Blofeld himself could have been cut, Bond and Moneypenny crashing Q's Grindr meetup could have been cut, a lot of Lyutsifer could have been cut, a lot of Madeleine's child and childhood could have been cut.
No Time to Die is also in some ways totally predictable: anyone here shocked at Logan's true nature simply has never seen a movie. I pegged him from the word go.
At times No Time to Die inadvertently slips into farce. Leister's end made me wonder why Bond didn't say "I'll never let go, Felix! I promise!". The meeting between Blofeld and Bond is so theatrical that I was genuinely surprised Blofeld didn't look at Bond and say, "Hello, Clarice". It certainly would have shown a bit of humor in a franchise that has swung too far the opposite direction from the jokey Roger Moore Era to the dour Daniel Craig Era.
As a side note, the few times No Time to Die threw in some effort at humor, it fell so flat it was more sad than funny.

It's a terrible thing when the Bond Villain is pointless, but No Time to Die has perhaps the worst Bond Villain of All Time. Even the somewhat campy Drax from Moonraker had more of a motivation than Lyutsifer Safin. Blofeld's drag act in Diamonds Are Forever is more frightening than Malek's "let me whisper everything to show how evil I am" performance.
As a side note, is it just me or is the name "Lyutsifer Safin", silly as it already is, meant to echo "Lucifer Satan"?
Malek went all-in on trying to be menacing by whispering his dialogue and camping it up with a vengeance, but what his exact plan was is hazy at best. Moreover, the idea that he was the killer from the opening scene is idiotic. Malek is only four years older than Seydoux, so if Madeleine was say seven, that would make Safin eleven versus the grown man he was at the start. If we then go into her current age of 36, we'd have to have Lyutsifer Safin be around 70 to make any of this plausible. It's all so laughably stupid to stretch believability that much.
Seydoux was totally blank as Madeleine, so much so I did briefly wondered if she was literally drugged. Waltz was apparently having a hoot camping it up to the Nth degree in this cash grab. Lynch seems more angry/irritated than anything else as the new 007, but I give the film credit for making this a case of having one's cake and eating it too. The only real highlight was de Armas' Paloma, even if it is a stretch to make her a novice agent who can take down people better than John Wick, but there it is.
Those fearing No Time to Die would go all woke (Black Female Bond! Gay Q!) can rest a little easy in that the former has both a logical explanation and the latter is barely touched on. To be fair, I wasn't aware anyone genuinely cared about Q's sex life, but there it is. 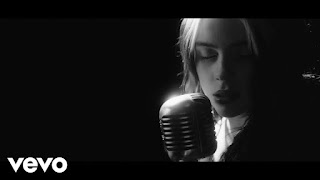 Turning to Billie Eilish's No Time to Die, I have heard it again and again and I do think well of it after repeated listening. It is far more in Eilish's mumbling manner (the first time I could barely make out what she was singing) but No Time to Die has grown on me to think it a midlevel Bond Theme. Not as horrible as Spectre's Writing's on the Wall but nowhere near the brilliance of the title theme to Goldfinger, No Time to Die fits to the somber tone of No Time to Die.
Eilish will no doubt be nominated if not win Best Original Song for No Time to Die, keeping the tradition of rewarding bad/weak Bond Themes (anyone who can make sense of Adele's lyrics for Skyfall earns a thousand dollars), but No Time to Die is probably the second-best Craig Era Bond Theme.
I found No Time to Die dull, blank, bloated and dour. In short, a typical Daniel Craig Era Bond Film.
DECISION: D-
Posted by Rick at 4:19 PM