Romeo and Juliet inspired our urban ghetto story of young love, Aaron Loves Angela. It's a bit underdeveloped in some ways, but its sweet story and tackling of then-current issues, along with a new twist on interracial relationship, makes it worth the time.

Talented basketball player Aaron (Kevin Hooks) has eyes only for Angela (Irene Cara), which proves a distraction on the court. There is, however, a major hitch in that Aaron is black and Angela is Puerto Rican. He also has to contend with his troubled father Ike (Moses Gunn) and Beau (Robert Hooks, Kevin's real-life father), the local pimp/drug kingpin trying to make a major score.

Beau loves throwing it in Ike's face that Ike's football career did not come to fruition. Despite running a successful diner Ike still struggles with his failed gridiron dreams and his wife's abandonment, sometimes taking it out on Aaron. Aaron and Angela continue their romance but their bliss is interrupted by Beau's latest scheme. Beau's efforts to pull a fast one costs him his life and end up putting Aaron and Angela's lives in danger. Will our star-crossed lovers manage to survive those after Beau's loot? 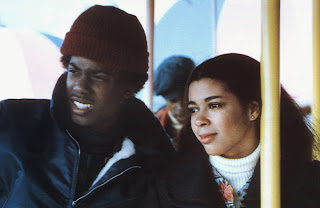 Aaron and Angela works for various reasons. One is the work of screenwriter Gerald Sanford and director Gordon Parks, Jr., both of whom bring a reality to the film. This is a gritty world, one that openly shows the dilapidated and dark conditions our characters live in. Sanford blends the blossoming romance with Aaron's home life quite well. Of particular note is when Ike drunkenly berates Aaron for being there, quickly turning around to apologize and acknowledge it is his anger at his wife's abandonment that causes his reaction.

Sanford and Parks, Jr. do not attempt to either sanctify or vilify Ike. Instead, he is presented as a whole man: flawed, hurt but desperate to see his son achieve what he could not. Almost all the characters are similarly showcased: the hooker next door Cleo (Ernestine Jackson) may have deflowered Aaron in his efforts to be ready to give himself to Angela, but she is also wise and genuinely caring. Even Beau, as over-the-top as he may have been in his pimp manner, has a sad moment. He tells Aaron, who has come upon him when the failed drug deal takes place above his and Angela's love nest, that his life choices led him here.

There is a flaw that Angela's private life is almost forgotten with Aaron taking a more prominent role. Perhaps this is due to Aaron Loves Angela being Cara's debut, but it's a credit to Parks, Jr. that he coaxed strong performances out of his cast. That it is Cara's first major role works in her favor, as her hesitancy and naivete makes Angela a more endearing character. How she discusses the magic of art is quite impressive for a new actress.

Another aspect to Aaron Loves Angela that makes it a strong film is Jose Feliciano's music. From his opening song Salsa Negra to the romantic ballad Angela, the music is authentic and appropriately lush.

Aaron Loves Angela may have limitations in terms of budget and some of its 1970s manner is dated. However, it's a sweet, simple story that works well.