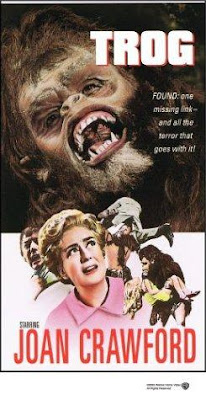 Christina Crawford once said in an interview that if Trog wasn't her mother Joan Crawford's last film, that it should have been. In many ways bonkers, bizarre and comical, Trog may have been a poor way for Crawford to end her impressive career. However, it says a great deal about Joan Crawford: actress that she gave it her all to make Trog as rational as it could be.

While exploring British caves a group of young men come upon a kind of monster, one that killed one of their own and left another injured. Dr. Brockton (Crawford) believes the creature is not a monster but the literal "missing link" between ape and man. She is not only convinced that it is a troglodyte (hence the name "Trog") but can be brought into civilization. With enough patience, "Trog" can learn to speak and tell of his world.

Opposing her is Sam Murdock (Michael Gough), a local businessman convinced Trog is a real monster who is bad for business. He also is contemptuous of Dr. Brockton on many levels: as a scientist, as a female, as a female scientist and possibly as an American. Determined to bring about both Brockton and Trog's downfall, he secretly breaks into the Brockton Institute. Unfortunately, Trog is still violent enough to attack him (though to be fair I would argue it was self-defense). Regardless, Trog escapes and goes on a murderous rampage, culminating in his abducting a little girl. Will Dr. Brockton be able to save both the girl and Trog, or will her discovery end in death? 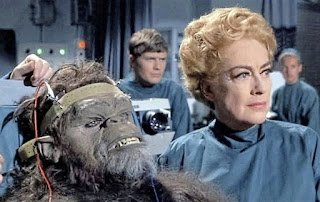 Not since Bela Lugosi Meets a Brooklyn Gorilla has there been such a strange and perhaps sad blending of a great talent with an oddball premise. As a film, Trog is an amusing failure, its blending of science fiction and sincerity almost endearing in its sincerity. Yet it is that same almost innocent delusion that makes Trog entertaining.

One cannot suppress giggles when one see Mildred Pierce both threaten and plead with a human gorilla to give her "the human child". It just seems so wild, so flat-out weird that it beggars belief.

However, Trog shows that no matter how almost crazed the plot, Joan Crawford was a true professional. Not once did she ever try to make her performance match the camp nature of Trog. To her immense credit, Crawford played everything straight, as if finding this missing link and teaching it to fetch was the most rational thing in the world. Her performance grounds the lunacy of Trog in a vague reality that makes the craziness of it all if not believable at least not completely insane.

Crawford was taking all this very seriously, and it is Crawford alone that makes Trog not slip into complete farce. I say "complete farce" because Trog is a B-Picture, the type the TNT Network's 100% Weird would have a field day with. Almost everything save Crawford is so bonkers and comical that Trog cannot be believed even when seen.

It is clear that Trog is a man in a very poor-fitting ape costume, forever looking like it had been hurriedly thrown on him. It is clear that various subplots such as a potential romance between Dr. Brockton's daughter Anne (Kim Braden) and Brockton's assistant/Trog survivor Cliff (John Hamill) are forgotten. 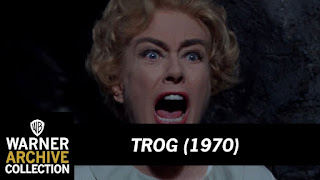 Apart from Gough, who pre-Batman was a delicious villain, all the acting is remote and disengaged, as if the cast was trying to distance itself from Trog while it was being made. Crawford and Gough had worked together before in Berserk!, also playing antagonists. Again they made for a fine pair of rivals, keeping the audience entertained with their verbal sparring.

I can also recommend John Scott's score, which is quite nice.

One thing that did trouble me and kept me from fully enjoying Trog was the violence near the end. Trog's killing spree was too graphic for my tastes, almost sadistic, and I lost some of the camp enjoyment.

However, as oddball and bonkers as it was, Trog if nothing else had a sincere and committed Joan Crawford performance. What kind of commitment she should have offered Trog is something I leave to viewers.