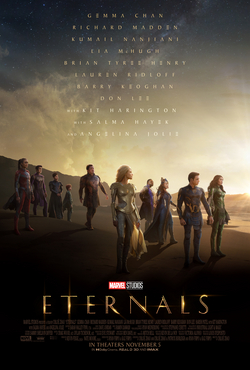 It is difficult to keep "the continuing story of The Avengers" going, but go it must. Phase Four of the Marvel Cinematic Universe has not been as roaring a success as have the previous Phases of the World's Longest and Most Expensive Soap Opera. Eternals decided that what would jump-start flagging interest would be a new cast, more diverse, and a new tone: more somber and introspective.

Pity to go through all that work and come up with something so dry and dull.

It isn't until a new Deviant suddenly emerges that Ikaris, Sersi and Sprite join forces to get the band back together. However, Ajak has been killed (thus, meaning they really are not Eternal), and there is more danger where not all will live to find out the shocking truth about their mission. Will they defy Arishem to save humanity or put the greater good ahead of their love for these simple creatures? 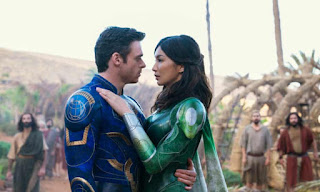 For the longest time I was trying to remember what Eternals reminded me of, and finally I remembered. Eternals reminds me of The Muppets Take Manhattan. It might be a strange parallel, especially given that four people adapted the comic book series (director Chloe Zhao requiring two screenwriting credits bumping it up to five). However, both involving getting a group of former friends forced to separate back together, and both involve searching for their leader/a new leader.

I leave it up to you to decide if Salma Hayek and Kermit the Frog can be seen as equals.

Eternals, despite its threadbare "getting the band back together" story runs a monstrous two-and-a-half hours long including a bizarre mid-credit scene where former One Direction member Harry Styles joins the Marvel Cinematic Universe and former Game of Thrones star Kit Harrington is teased as a new figure who will spin off into his own adventures.

As a side note, Harry Styles was fourteen years old when the MCU kicked off in Iron-Man, so make of that what you will.

Eternals, bless its heart, wants to be a more serious, perhaps even meditative entry into this never-ending series. However, its self-seriousness slips into almost pompous self-importance, treating so much with such moroseness it can't bother to be even remotely fun. Never has the potential end of the world seemed so anticlimactic bordering on dull.

Not that the plot point of "the Earth as a giant incubator for a new god-like being" makes things any more interesting. Marvin the Martian's plans for Earth's destruction were more logical. 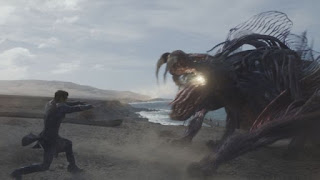 The dull nature of Eternals wasn't just one of its major issues. In a film where major turning points such as the fall of Tenochtitlan and the bombing of Hiroshima were treated as so much window dressing, we are saddled with simultaneously so little and so much story that you end up bored and confused.

You have ten ostensibly major characters in Eternals, and no film can hold so many leads and expect to give them a fair shake. Trying to cram so many figures into one film means that oftentimes you forget about the missing characters as soon as they are off screen. The majority of screen time is between Madden and Chan, but even with a brief (and dull) sex scene you don't care about them.

To be fair, I think Madden was directed to be lifeless as Ikaris, a figure who does not seem capable of any emotion. Chan, I think, did her best but she too seemed disengaged from things that it is a puzzle why anyone would think either would make for Ajak's successor.

I think that due to forcing so many characters in what other films would start with three at the most creates bad situations. You have the situation where characters are not missed when not on screen. You also have to reduce characters to their most basic characteristics: surly (Druig), cocky (Kingo), conflicted (Thena), gay (Phanos), deaf (Makkaris). 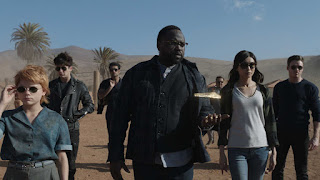 With regards the last two, Eternals may have been aiming for a good thing to have greater diversity and representation. However, apart from being deaf what is Makkaris like as a person? Did Arishem create Makkaris as deaf? How did she manage to communicate in sign language with ancient Mesopotamians and Babylonians with the greatest of ease? If you are going to go through all the trouble of changing a character's race and gender plus add a disability, at least take the time to add a personality too. Otherwise, it comes close to merely running through a checklist of characteristics for a little virtue signaling.

To be fair, Phanos has a little more to distinguish him apart from being gay: he is a technical whiz. However, him being gay is a large part of his persona to keep making references to it (such as in a kiss between him and his Arab spouse which can be clipped for Chinese/Arab markets); if one is going to make a character gay just to say "we have a gay character", why go through all that and skip making him more complex?

It is curious that perhaps the best performance and most complex character is Karun (Harish Patel), Kingo's exceptionally eager manager forever filming him for a documentary about this Bollywood legend. While there as primarily comic relief (which he does well), Patel's farewell to the Eternals when all hope appears lost is surprisingly moving. That cannot be said for Nanjiani's Kingo, someone who is meant to bring humor through an inflated ego but whose efforts at humor fall flat.

As another side note, if Druig is hiding in "the Amazon", wouldn't it be more logical to have his villagers speak Portuguese versus Spanish? Yes, many parts of the Amazon are in Spanish-speaking countries, but I think most people associate the Amazon with Brazil. Yet, I digress.

Eternals is slow, boring, and worse, uninteresting. Thor: The Dark World was so bad I literally had to look up my own review to even remember if I had seen it. I will remember watching Eternals, but I do wish I could forget that I had.