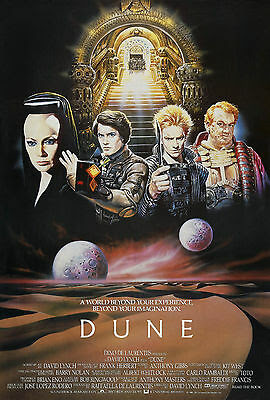 In the filmography of David Lynch, his adaptation of Frank Herbert's massive science-fiction epic Dune is a curiosity. Loved by some, loathed by others, disowned by Lynch, perhaps now we can look at Dune again with new eyes, fresh eyes. It is time for the sleeper to reawaken.

The planet Arrakis, also known as Dune, is the source of major conflict between two grand intergalactic Houses. One noble family, House Atreides, has taken over Arrakis from their bitter rivals, House Harkonnen.

Baron Vladimir Harkonnen (Kenneth McMillan), secretly in league with Padishah Emperor Shaddam IV (Jose Ferrer) will eliminate House Atreides and retake Dune. Standing in his way is Duke Leto Atreides (Jurgen Prochnow) and his son, Paul (Kyle MacLachlan). The Duke's concubine, the Lady Jessica (Francesca Annis), once a member of the nun-like Bene Gesserit order, has trained her son in the ways of the order.

Could Paul be the Kwisatz Haderach, a long-prophesied Messiah-like figure? Reverend Mother Gaius Helen Mohiam (Sian Phillips) fears as much. She too joins in the plot against the Atreides, but despite everyone's best efforts the now-Duke Paul and the Lady Jessica survive. They also join the native Arrakis Fremen people, who will stop the spice production and bring total war against the Harkonnen and Emperor, where Paul's sister Alia (Alicia Roanne Witt) and the Baron's bloodthirsty nephew Feyd Rautha (Sting) will involve themselves in this epic battle. 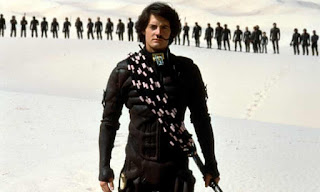 At a certain point, one gets the sense that even David Lynch (who adapted the novel as well as directed) thinks all this is so much patent silliness. You can't have the Emperor of the Known Universe shout out "Bring in that floating fat man!" and not expect people to burst out laughing. One thinks that even if Dune kept elements from the book to the film, the idea that anyone could take seeing a cat milked seriously boggles the imagination more than the sandworms that threaten Arrakis.

Dune is filled with oddball moments that they astonish the viewer, not in amazement but in stunning incomprehension. When the Harkonnen army is attacking the Atreides Arrakis fortress, military leader Gurney Halleck (Patrick Stewart) leads his troops with "LONG LIVE DUKE LETO!" while holding the noble family's pet pug. As to why Gurney is cradling the pug one simply has no idea. When Gurney reappears to the now Fremen-like Paul, the questions of exactly how Gurney survived for an unknown amount of time and especially what happened to the dog are not answered.

To be fair to Lynch, he was given an impossible task in trying to fit in what is a grand epic story into one film. So much of Dune has to be explained to the viewer that the film buckles under the massive weight. With endless characters and plots the film eventually becomes incomprehensible. I imagine that even those who read Herbert's novel would find Dune near gibberish with things going so fast that it becomes a muddle. For those who have never read Dune, things simply become too convoluted to try and sort it all out.

Take Paul's romance with the female Fremen Chani (Sean Young). The film has them going from meeting to passionately in love in what seems minutes. As Dune tries to move on from one thing to another, things have to either be rushed or forgotten. The Fremen servant Shadout Mapes (Linda Hunt) says some kind of warning to herself in voiceover, pops in to see Paul, and then is seeing dying during the Harkonnen attack.

It's simply astonishing that experienced filmmakers could have a character apparently meant to be important (or at least relevant) pop in and out with nary a rhyme or reason. 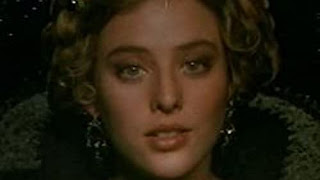 This leads us to perhaps one of Dune's most disastrous elements: the infamous voiceovers. As the plot is so thick, Lynch resorted to voiceovers to try and fill in plot points and details. Dune literally opens with a voiceover from Princess Irulan (Virginia Madsen), which to be fair worked well. It is only later that the viewer keeps hearing the thoughts of endless number of characters that it slips into farce.

While this is probably not a definitive count of  Dune's voiceover use, I counted five times when Madsen's Irulan explained plot details or moved the plot forward through dialogue. That Irulan literally figured in no way to Dune's plot apart from being de facto narrator makes the choice of having her explain things more puzzling.

Even that perhaps could be forgiven, but not Dune's endless voiceovers from so many other characters that it becomes maddening. I counted, give or take, a stunning FIFTY-FOUR times when a character spoke his/her thoughts. While MacLachlan's Paul carried the bulk of the mind-thoughts, we also literally heard the thoughts of the Lady Jessica, the Reverend Mother, the Baron Harkonnen, Fyed, Mapes, Fremen expert Doctor Kynes (Max von Sydow), the Atreides' loyal servant Thufir Hawat (Freddie Jones) and perhaps the Emperor and Duke Leto.

It is more than likely I missed a few, but the endless "softly speaking my thoughts" grew so incessant that the audience could probably guess correctly when someone would start whispering their inner thoughts to themselves.

This, for whatever reason (desperation, disinterest) was how Lynch both moved the plot forward and tried to give backstory. It simply didn't work, causing nothing more than frustration and puzzlement. 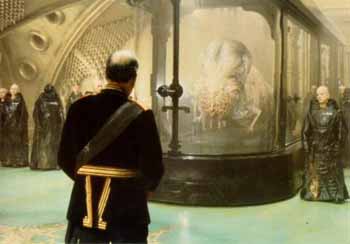 Dune was also hampered by a poor production design. It wants us to look upon the leaders of the Spacing Guild as these powerful, albeit mutated beings pulling the strings behind the scenes. However, as my late friend Fidel Gomez, Jr. observed, they look like giant talking penises.

And he actually liked Dune!

The world of Dune looks like massive sets from a foreign production: in turns gaudy and fake. Nothing looks real and the efforts to make things seem real make Dune look more fake. Perhaps credit can be given to certain moments where Dune looks like a low-grade acid trip, but so much of it looks and feels bonkers.

In terms of performances, I don't think even the actors knew what was going on. Bless actors like Ferrer, who were forced to try to make massive info dumps sound rational. However, Dune's screenplay damned them into nearly-impossible situations. Almost every actor appears stiff in a misguided effort to make Dune appear serious versus silly, but the near-uniformity of blankness helps no one.

MacLachlan went on to better collaborations with Lynch (Blue Velvet, Twin Peaks), but Dune shows him weak, stumbling through bad dialogue and showing his lack of experience. As if to compensate for the stiffness of almost everyone else, McMillan's Baron Harkonnen embraced the sheer insanity of things by being unapologetically wildly over-the-top, devouring every scene with almost manic frenzy. Sting was apparently having a grand old time as Feyd, the murderous crazed villain determined to kill the potential Messiah.

I think only Sian Phillips managed to come across as remotely sensible as the Reverend Mother, though her "GET OUT OF MY MIND!" cry has become a gif.

If I find any good in Dune, it is in Toto's score, which sounds like an early-80's rock concept album. Curiously, the one track not written by Toto was The Prophecy Theme. That was written by Brian Eno, and with its vaguely New Age/Music From the Hearts of Space manner it is surprising Eno didn't score the whole of Dune versus just one excellent number.

Despite its myriad of flaws, I cannot help but if not love David Lynch's Dune, at least find it entertaining. Whether I find it entertaining due to its whacked-out nature or not I cannot say for certain. It may be crazy, maybe even awful, but Dune is never nothing short of weirdly fascinating.