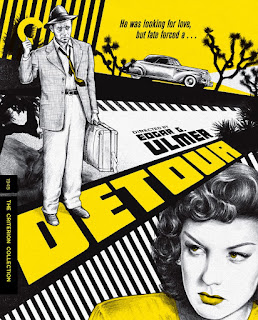 DETOUR
By all measures, Detour should have been forgotten, a relic of small-budget filmmaking firmly of its time. However, these qualities rather than diminish Detour actually enhance it, making it an early example of film noir that would go on to influence a whole genre of film.
Al Roberts (Tom Neil) narrates his story in voiceover as the song I Can't Believe That You're In Love With Me triggers his memories and temper. A once-promising pianist relegated to playing in a dive bar, the only bright spot is his fiancée Sue Harvey (Barbara Drake). She decides to try her luck in Hollywood, much to Al's unhappiness. Eventually though, he follows her to California, hitchhiking due to limited funds.
Close to his goal, his last ride is with Charles Haskell, Jr. (Edmund MacDonald), a gambler who plans on making a big score at the racetracks. On a dark and stormy night, Charles appears to have suffered a heart attack when Al was driving. If that didn't kill him, falling out of the car and hitting his head on a rock did it.
Al, terrified he'll be blamed for Haskell's death, rashly hides the body and assumes his identity. As he crosses into California and comes closer and closer to Sue, he gives a lift to a woman calling herself Vera (Ann Savage). Vera reveals that she knows Al is not Haskell, as Haskell had given Vera a lift earlier and tried to assault her. She threatens Al with exposure unless he sells the car and splits the profits. Al, already trapped, finds himself further ensnared by Vera's machinations, until things take a shocking and bizarre turn that destroys them both. 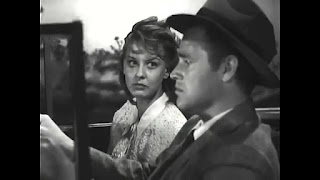 Detour is essentially a B-movie with a thin budget. You can see it with the rear-screen projections and limited sets (which look like they are close to wobbling). However, the lack of funds helped in keeping the focus on the story and performances. Even the sparse nature of Detour can create surprisingly strong visual moments.
When Al imagines what Sue's potential Hollywood stardom would be, we see her singing I Can't Believe That You're in Love With Me while musicians play in the shadows. There is a haunting and haunted quality to this little moment in the surprisingly short running time (a little over an hour). Whether it is Al literally fading into fog or how dark the world gets when Al remembers to Vera's introduction, Detour's visual style is a masterclass in how to use limitations to a film's advantage.
Detour may not be the literal first film noir made, but I find it fascinating that it was released in 1945 when the United States was probably at its zenith in strength and optimism. The U.S. had just won the most intense and immense war it had fought outside its Civil War, the economy was roaring and light musicals and comedies were the cinematic norm. At a time of joyful escapism we plunge into this dark tale of dreams shattered and human misery, of dangerous women and weak men. 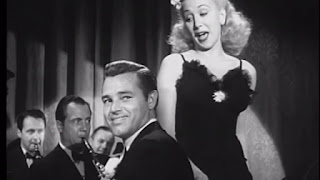 As most of Detour is a two-person show, we focus on the performances of Neal and Savage. Neal is perfect in his sad-sack yet tightly-wound up Al. In the flashbacks to his New York days he has a charm mixed with if not cynicism at least a more jaded manner to his character. The shift from the handsome and talented piano player to a disheveled, almost totally ruined man is an exceptional performance.
It however, falls in the shadow of Savage's fierce and yes, savage performance as Vera. She is hard as nails, unrepentant, angry, and unafraid to stomp on anyone who got in her way. Only once can I remember even a modicum of humanity behind the stone-cold heart, and that memory is hazy. Detour gives us in Savage's performance one of most fierce femme fatales in film.
One aspect of Detour that I am surprised isn't covered more is the potential that Al may be an unreliable narrator. We take it at face value that the story he's telling is true. To accept that however, we have to accept the strange manners that death takes. As he is the one telling us this story, we accept that it is the truth. However, what if he is telling us things to paint himself as almost a victim? Particularly with Vera's fate, it seems so bizarre that it is almost unbelievable.
Detour is a brilliant film: short, bare-bones and filled with strong visuals and performances. You can't take a wrong turn with Detour.
DECISION: A+
Posted by Rick at 1:55 AM