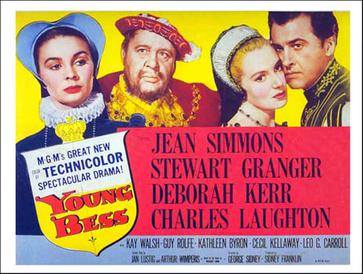 Before she was Gloriana, she was Young Bess. Chronicling the early years of the Lady Elizabeth Tudor before she gained the throne as the third legitimate child of Henry VIII, Young Bess suffers from a stodginess that push it down. However, it is just respectable enough to make it acceptable if not as great as its subject.

On the day Queen Mary I dies, two old servants to Lady Elizabeth (Jean Simmons) remember the tumultuous years that got them where they are now. Elizabeth Tudor, daughter of Anne Boleyn and Henry VIII (Charles Laughton) forever finds herself declared illegitimate and legitimate, depending on what mood Henry is in.

As much as Henry pins his hopes on his only legitimate son the Prince Edward (Rex Thompson), Henry knows that Elizabeth is also needed in case the future Edward VI and their elder sister Mary don't live. Bess, willful, stubborn but lonely too, has her own issues. She's fallen madly in love with handsome courtier Thomas Seymour (Stewart Granger), the only man who can coax a smile from the Lady/Princess Elizabeth. He, however, has eyes only for Catherine Parr (Deborah Kerr), Elizabeth's fourth stepmother.

Complicating matters more is that all three find themselves in Tudor court intrigue, forever on the swordsman's edge. Elizabeth sacrifices her love for Thomas by persuading him to let his third stepmother marry Thomas. Now, however, while Queen Elizabeth I now rises, she rises alone, her stepmother and Thomas having died long ago. 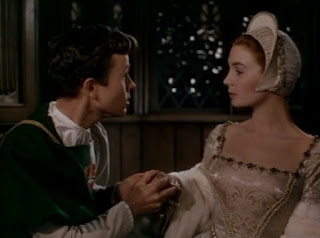 Young Bess is properly respectable, but at its heart we do not see the fires burning beneath the future Queen. Instead, we get a more dry telling of her extraordinary life. I think the main reason for that is because Young Bess loses steam when it forgets its protagonist.

It is a curious thing that despite the title Young Bess is not the main figure. Instead, Jan Lustig and Arthur Wimperis' adaptation of Margaret Irwin's novel focuses more attention on the Catherine Parr/Thomas Stewart romance that it might as well be titled The Not-So-Merry Widow. Perhaps this was due to trying to build up Kerr as Star (they rhyme) but neither she or Granger appeared to be anything other than stilted in their sweeping romance.

Young Bess herself seems more eager when playfully accepting the overtures of page Barnaby (Robert Arthur), a young lad clearly besotted with our noble lady. I would have preferred a film focusing on his thwarted love for the Tudor Princess, if only to see Elizabeth be more central to the film.

It is a curious thing that Young Bess spent so much time away from Bess herself, a decision that pushed the film down. However, there are some elements that make it slightly more appealing. 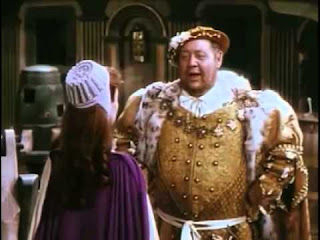 We see Charles Laughton play Henry VIII again after his Oscar-winning turn in The Private Life of Henry VIII. Loud, arrogant, proud, tyrannical but with a bit of mirth beneath the menace, Laughton's brief performance was enjoyable. His death scene was a bit of scenery-chewing, but I can forgive that. Simmons did well as the proud, haughty but lovelorn figure, doing the best she could with a weak script.

Again, if only Young Bess weren't so focused on the Thomas/Catherine romance. Despite being almost the main characters neither Granger or Kerr gave it their all, both too wrapped up in being "dashing" and "grand" to make Thomas or Catherine deep characters.

Young Bess is not a bad film, just a bit stodgy and less than what it could have been. Pleasant, non-threatening and a minor diversion, it is acceptable if nothing more.