Making A Killing in the Circus...

Allow me, if you will, to indulge in a little nostalgia.  Many moons ago, Turner Network Television (TNT), had late-night programming called 100% Weird.  It aired all sorts of odd films.  Thanks to 100% Weird, I saw two films that captivated me.  One was Theater of Blood (still a great title).  The other?  Berserk!  Both were, well...weird, but strangely compelling in their lunacy and unapologetic in their bizarreness.

I can't say anything bad about Berserk! even though it isn't exactly M-G-M material, despite its star, once the Queen of M-G-M Studios, Joan Crawford.  Berserk! was her penultimate film, and while by no means can it qualify as good, it is entertaining enough if one doesn't think long on it.

Monica Rivers (Crawford) owns The Great Rivers Circus, but it doesn't live up to its billing.  It looks like it's fallen on hard times, but then a bit of luck turns up Monica's way.  One of her leading acts, high-wire acrobat Gaspar the Great (Thomas Cimarro) gets killed when his wire not only snaps but wraps itself around his neck, strangling him in front of the audience.  While Monica is horrified, she also sees a golden opportunity: people will start coming to the circus to hopefully see a repeat of death.

Her business partner Dorando (Michael Gough) is displeased and wants out, but for the moment they are stuck together.  Enter Frank Hawkins (Ty Hardin), billed as The Magnificent Hawkins, who can do Gaspar better: he can walk on a tightrope both blindfolded AND over a row of exposed bayonets.

Why do I keep thinking that CAN'T be good?

In any case, The Great Rivers Circus manages to keep touring, despite Gaspar's grisly death.  However, there are more murders haunting the joint.  Dorando gets a spike in his head, and soon the crew suspects Monica herself of killing people for nefarious reasons, including publicity.  Circus talent/tart Matilda (Diana Dors) is open about accusing Monica, while Monica's loyal midget Bruno (George Claydon) defends her.  Of course, Matilda has her own reasons to hate Monica: she has taken a shining to Frank, while Frank has eyes (and his body) only for Monica (despite a visible age gap of twenty-six years between the acrobat and the Ringmistress).

Sent from Scotland Yard to investigate is Detective Superintendent Brooks (Robert Hardy) a bit of a dandy who observes all the chicanery going on.

Good thing too, now that Matilda has been 'accidentally' sawed in half.  How many murders will there be?  Who done it?  Is it Monica?  Her faithful midget? (Never expected to write THAT line).  What about Frank himself?

Well, you're wrong...after one last murder the serial killer is unmasked at last, and Berserk! ends with our (highly-implausible) assassin getting the shock of their death!

When one watches Berserk! one certainly doesn't watch it for its plot (Aben Kandel and producer Herman Cohen doing the screenplay and story honors).  This is because the story is idiotic.  Right from the get-go it doesn't make sense.  In order to believe Berserk!, we have to believe that the unseen killer not only managed to slip around the circus unseen to tamper with Gaspar's equipment, but also managed to get the tightrope to go around his neck as he fell.  Even worse, when the actual killer is discovered, the killer's identity is ridiculous because we've NEVER been given any indication that said person could POSSIBLY have done it.

In a curious twist of fate and without giving too much away, Berserk! appears to be similar to an earlier Crawford film: Strait-Jacket.  You have a series of murders, Joan Crawford's character as a chief suspect, and the final discovery of the killer who happens to be the same one as in both films.  If you've seen Strait-Jacket, you should know who the killer in Berserk! is.

The odd thing is that in Strait-Jacket, it did have a bit of intelligence (the screenplay was by Psycho author Robert Bloch) without losing a slightly camp feel (the director was William Castle).  In Berserk!, all one has is the camp feel (the obvious limits on the budget being evident).  The story is illogical and some of the acting is weak.

Before he became the loyal manservant Alfred Pennyworth to a whole generation, Michael Gough was known as a villain par excellence in British cinema, and in Berserk! he isn't strictly evil but a bit of a weak man.  In a curious twist, two characters dressed like Batman and Robin from the campy 60s television show appear in the Circus Parade.

Also as a side note, keep an eye for Geoffrey Keen in a small role as Brooks' superior.  Bond film aficionados will recognize him from his appearances as the Minister of Defence in some of the Roger Moore-era 007 pictures.

Hardin is the requisite hunk, and while Crawford's lighting makes it obvious that she is being presented in the best light possible (no pun intended), one wonders how producer Cohen or director Jim O'Connolly didn't think that a 61-year-old woman having romantic relations with a 35-year-old man wouldn't look a bit peculiar (especially in 1967).   Hawkins' motives are suspect: is he playing Monica for a fool, romancing her to get his hands on shares of the circus?  While that would appear to be the logical conclusion, as directed Hardin appears genuinely fascinated and passionate about Monica.

Here is where Joan Crawford deserves high praise.  Crawford never cheats in a performance.  In Berserk!, she plays it totally straight, giving her usual strong performance as the sober and realistic Monica.  One can't fault her for giving even B-Picture material like Berserk! her total commitment.  Despite her flaws (and from what one has read, she had spades of them), she always played everything straight and never veered into winking at the audience or being as camp as the material;  there were ample opportunities, with loyal midgets and a man young enough to be her son madly in love with her, but for all intents and purposes Crawford acted as if everything were completely realistic. 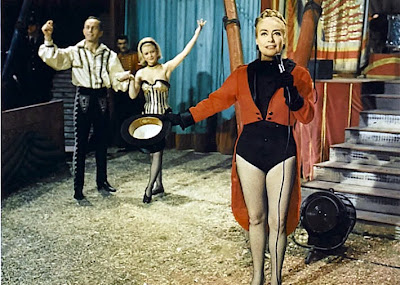 One has to admire how Joan Crawford, even in her 60s, still had gams of which to be proud of.  They are accentuated by her ringmistress costume,  one created by an uncredited Edith Head as a favor to Crawford.  All her other outfits were her own, and if one watches Berserk! with that in mind one can appreciate that she had a certain sartorial style.

Berserk! in many ways is a B-Picture: illogical, a bit obvious in its artiface (seeing "Hawkins" plunge to his death is laughable), but Crawford gave it her all and was totally committed to the role.  It isn't a good film, but if one is willing to dispense with reality and not be too hung up (pardon the pun) on both the killer's identity (which is totally ridiculous and a cheat) and said killer's end (a howler that might have you singing, "and the lighting strikes"), Berserk! is a good way of wasting time and marveling at how a once-great star could be reduced to low-rent material but who was still a consummate pro that she gave even something as bad as Berserk! her all.

Perhaps Berserk! is the best way to sum up the final roles of Joan Crawford's career.