The Great Gatsby (2000): The Television Miniseries The Love That Past Us By...

The Great Gatsby has been enshrined into the pantheon of literary masterpieces, but in an interesting turn, the best adaptation (so far) has not been on film but on television, a medium far from existence at the F. Scott Fitzgerald's death.  This isn't to say the A & E version of that little drunk's novel is perfect.  It just happens to be the best one done, and if it means that this version of The Great Gatsby is the one that has sucked the least, well...

Told through the voice-over of Nick Carroway (Paul Rudd), The Great Gatsby tells the story of his summer neighbor: the mysteriously wealthy Jay Gatsby (Toby Stephens). Gatsby throws the greatest parties, but he has a secret longing unbeknown  to Nick for Nick's married cousin, the beautiful Daisy Buchanan (Mira Sorvino).  Daisy is married to Tom (Martin Donova), but he is a hopeless womanizer, keeping the local mechanic's wife Myrtle (Heather Goldenhersh) as his mistress.

Nick becomes the unwitting connection between Jay and Daisy, bringing them together as they rekindle their long-lost love affair interrupted by the First World War and Gatsby's pre-war poverty.  Now, however, he is rich by means best left to the imagination.  Eventually the lovers come to a head with Tom, and in a terrible twist of fate Myrtle is run down in Gatsby's car.  Myrtle's loyal but dimwitted husband Wilson (William Camp) tracks down the car's owner and kills Jay Gatsby.  Only Nick knows the truth Gatsby confessed: it was Daisy who was driving and who inadvertently ran over Myrtle, who had mistakenly thought Tom was coming back.

As adaptations go this version of The Great Gatsby has some good things going for it.  Rudd shows off what a strong dramatic actor he can be, which is something we can forget given that he's been in a run of film comedies.  When he's not speaking in voice-over (which I imagine is almost de rigueur in any adaptation of Fitzgerald's novel), we see Nick as the observer who has great sympathy for all concerned, but also great anger at how Jay's dreams end up not only destroying Gatsby but which were built on a lie. 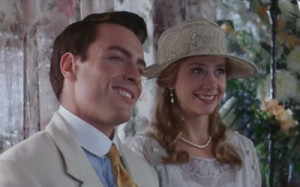 Stephens was adequate as the titular hero, neither showing himself off as the lost romantic but not appearing stiff or bored.  He handled the American accent well but he was not able to really appear to be so passionately in love with the dream of Daisy.  Not a terrible performance, not a brilliant one.

It is Sorvino's take on Daisy that is a little bit puzzling.  It wasn't so much that she wasn't able to project the idea of that obscure object of desire that Daisy is, but it is her delivery that is perplexing.  The way she speaks all her lines is far too reminiscent of how she spoke as Marilyn Monroe in another t.v. movie, Norma Jean & Marilyn.  It was a bit too breathy, as if she were playing Marilyn Monroe playing Daisy Buchanan, and not even THE Monroe, but a Monroe impersonator.

I think the fault lies in Robert Markowitz's directing, which told her to not so much speak her lines but breathe them out, a cross between Norma Jean & Marilyn and her hooker role in Mighty Aphrodite.

Markowitz also has to answer for some poor choices on other fronts.  For example, while the costumes were I figure accurate at the end of The Great Gatsby he ends up looking like Doctor Who.

I also think it was a mistake of John McLaughlin's screenplay to start with Wilson killing Gatsby.  This I imagine was done to start things off with a mystery: who got killed, why, but it only serves to take away the suspense that would build for the non-reader who now knows what to expect.  It might have been better to just start out with our characters being introduced to each other and let the story tell itself.  I will add that the whole thing with Gatsby holding on to the cuff links and having them sink to the pool was, visually, a touch too much, especially in the beginning.

Finally, while I realize voice-over is something that appears unavoidable in The Great Gatsby, the film becomes a bit too reliant on it to where one becomes a bit irritated by how often Nick speaks to us.

Still, these I find are not reasons to think this version of The Great Gatsby is the best version we have going.  In particular Rudd's performance lifts the project, and whatever missteps it takes are made up for by his dramatic turn, of which I hope there will be more of in the future.