The Death of Doctor Who Episode Five

Now we have reached the end of this particular retrospective, trying to find the causes of why a show that was so good and that had a successful revival to where it will be able to celebrate its 50th Anniversary should perhaps be cancelled.

We've covered how Doctor Who appears deaf, dumb and blind to referencing anything pre-Rose.

We've covered how NuWhovians don't appear to ask questions or investigate anything pre-Rose.

We've covered how supporting characters and story arcs are drowning the stories and forcing the main character to play a supporting role on his own show.

We've covered how the current Doctor, Matt Smith, is making a mockery of our titular hero and turning him into a joke.

Now, we've come to the climax, The Number One Thing Killing Doctor Who...


1.) STEVEN MOFFAT
I understand Moffat has written great stories both for and outside of Doctor Who.  Now, I never saw Coupling (and from what I understand, neither did the rest of America) but I'm told it was pretty good.

When one thinks about it though, Coupling is about the only original thing Moffat has ever done that has achieved note in America.  He had Jekyll, a series based on something written before he was born.  He now is being celebrated for Sherlock, which again despite his champions is not an original creation.  He finally has Doctor Who, which was created in 1963 or 2005 (depending on who you ask).

At first he just wrote for the series.  He has some pretty good stories in there.  However, once he achieved ultimate power, like some mad dictator, he decided that controlling this iconic show wasn't enough.  He was going to recreate it in his own image. 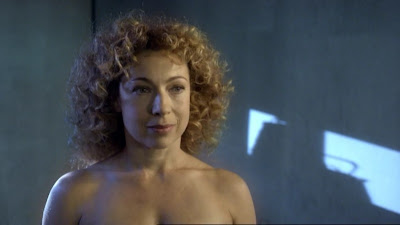 It didn't have to be this way.  Steven Moffat wrote Blink, which is ranked among the Greatest Doctor Who Stories of All Time.  He has done some good work.  However, that doesn't invalidate some unspeakable decisions Moffat has taken.

He's built up his "mistress" River Song to this Iconic figure when she has nothing to offer except 'spoilers'.

He's created stories that don't make any sense because of his fixation with said "mistress".

He's diminished the Doctor to almost a guest star on his own show.

He's become more focused on the secondary characters than on the main one.

He's decided that every story has to be connected even if they work better without there being a connection.

He puts in comedy where it doesn't work (whole episodes worth in some cases).

He alters long-established Doctor Who icons for a cheap joke (as when River pilots the TARDIS without the 'whooshing' sound because as she puts it, "you always leave the parking brake on.")

THIS irks me more than a lot of the bills of complaint.  The 'whooshing' is a long-established part of Doctor Who mythology.  It was created by the BBC Radiophonic Workshop deliberately.  Brian Hodgson described it as 'the sound of time itself tearing apart, going and coming at the same time'.  All incarnations of the Doctor, and even Time Lord Companion Romana (the only other person I know of who could pilot the TARDIS better than The Doctor) had that whooshing sound effect.

However, Moffat decided it would be funny to show it wasn't needed and give a chance to show off just how clever River Song was.  He failed in both respects, and guess what?  That whooshing sound is STILL THERE!  If we go by Moffat's thinking, the Doctor STILL hasn't taken off the brake.  How stupid can he be (either the Doctor or Steven Moffat, take your pick)?

Steven Moffat focuses too much on HIS creations and not on the main character.

Steven Moffat goes to ridiculous lengths to jam his characters into idiotic situations... just how often HAS Rory Williams, Rory Pond...whatever you call him now...DIED?

Steven Moffat insists on making everything part of the whole rather than individual parts, resulting in some embarrassing plot holes that would be laughed out of a basic writing course but which NuWhovians don't even bother to think out (River Song Regenerates!  River Song can remain a child for almost twenty years so as to grow up with her parents!).

Steven Moffat decided that the Doctor was now going to be a joke, someone to laugh at rather than admire or respect...the Doctor now lays down backing vocals and bursts into people's bedrooms, unaware of what married couples do there.

I should note that so far in my reviews of Doctor Who stories 1963-present, out of the Bottom Ten, SIX are from the Matt Smith Era.  I'm sure there are some truly great shows coming, and that some of the ones I don't think highly of are loved by others.  Par for the course I grant you.  However, I will also say that so far not one Matt Smith Doctor Who story has earned a score higher than an 8.  That's still good, but when you think that the First, Second, Ninth and Tenth Doctors have all had 10/10 stories, one wonders whether creatively, on the cusp of Doctor Who's 50th Anniversary, the creativity is all gone.

Now that Steven Moffat is in full charge of the show, all I can see is more comedy, more nonsensical storylines, and more of that DAMN RIVER! Doctor Who's last original producer, John Nathan-Turner, once said in an interview that he feared going down in history as the man who killed Doctor Who.  Sadly, JNT died in 2002, three years before Doctor Who was resurrected.  I think the revival of Doctor Who would have served to give him some peace about how Doctor Who was left in shambles at the end of its original run (some things not his fault, some things most certainly his fault).  Yes, JNT can be blamed, rightly, for a lot of decisions that brought down the series, but he also was the only thing that kept it going until the very bitter end with Survival.