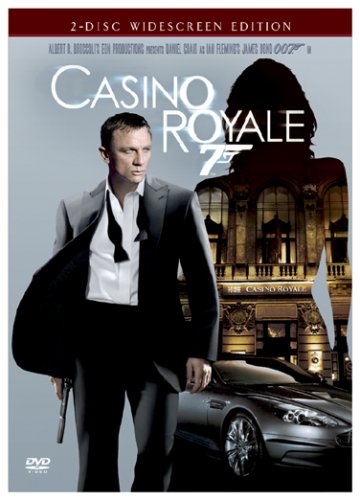 In a strange way, after all the years we've had with James Bond, Casino Royale is suppose to be the very beginning of 007's adventures.  It does chronicle not just his first official mission with MI6 but also touches on him pre-licence to kill.  The Bond franchise needed a reboot after the twin disasters of The World Is Not Enough and Die Another Day.  Casino Royale made that reboot possible, to start afresh.  However, as much good as that did, it does set up some serious problems looming in 007's direction.

LeChiffre (Mads Mikkelsen) is the leading financier to the world's terrorists.  He has taken some money from an African guerrilla leader and hopes to make a killing by betting against an airline company about to release their new airplane prototype.  If all goes well (i.e. the plane is blown up) the company would be bankrupt and LeChiffre would make a healthy return on his investment.  Unfortunately, newly-minted 00 agent James Bond 007 (Daniel Craig) has taken a lot of investigative steps to track down the guy who hired the original bombmaker, leading him to the plane.

While MI6 agent M (Judi Dench) isn't too thrilled with her loose cannon agent (especially after he manages to break into her top-secret home), she nevertheless sends Bond to Montenegro, where LeChiffre is going to a high-stakes poker game to get the money back and more.  Accompanying Bond is Treasury Agent Vesper Lynd (Eva Green) with local contact Mathis (Giancarlo Giannini) to help.

Casino Royale then takes much time at the actual poker match, where Bond sometimes doesn't know when to hold'em, or when to fold'em.  During their breaks the terrorists menace both LeChiffre and Bond, and Bond comes close to dying a few times.  In the end, Bond wins the game but that doesn't stop LeChiffre: he abducts Vesper and tortures Bond to get the account number and password.

In a curious twist of fate, they are rescued by Mr. White (Jesper Christensen), the head of the organization LeChiffre is working for.  Bond recovers, Mathis is taken for possibly being a double agent, and Bond & Lynd, now in love, decide to make a life together.

As is the case, whenever you have a long denouement we know things aren't going to end well.  While in Venice, Bond sends his letter of resignation but it isn't accepted.  It seems the winnings were never deposited into the Treasury account.  Bond discovers Vesper has taken the money, follows her, and in the ensuing chaos which literally brings down the house Lynd sacrifices herself, regretful of the pain she's caused.

It wasn't Vesper's first sacrifice: Lynd had offered the money in exchange for Bond's life.  Casino Royale ends with Bond tracking down Mr. White, and our British secret agent introducing himself as "Bond.  James Bond."

I think, looking back with as much dispassion as I can muster,  my shifting views on Casino Royale are based on the fact that it is both a Bond film and not a Bond film.  On the one hand, you do have the characters from previous Bond adventures, a couple of beautiful Bond Girls, and a lot of espionage.  On the other, there is such a concerted effort to make this into a serious film that other Bond elements disappear altogether (but more on that later).

Casino Royale starts out with a wild parkour chase in Madagascar, a scene so great that I genuinely wonder why it wasn't used as the pre-title sequence, rather than the black-and-white opening of seeing how Bond earned his 00 status.  Truth be told, one could have built a whole movie around that mission, but it does seem a bit of stretching out to have the pre-title scene before we get into the main action, and even that appears to be broken down to three different stories.

The first part is about Bond's investigation of the bombmaker he blew away and blew up.
The second part is at the poker game.
The third, where Lynd's duplicity is unmasked and paid for with a death in Venice.

That third part really is curious because so much time is taken up by the romance between Lynd and Bond that we almost know this won't end well.

I'd say that Neil Purvis, Robert Wade, and Paul Haggis' screenplay is rather long and at times convoluted (the entire business of whether Mathis is a traitor is never fully answered one way or another, and it takes a great deal of time for the story to connect the bombing of the airplane to LeChiffre).  I also noticed that the connection between the attempted airplane bombing and LeChiffre appears to have been made almost accidentally.

In short, given that Casino Royale is almost two-and-a-half hours long, one wonders whether things (such as the long romance or the poker game or the opening or the investigation of the airplane plot) couldn't have been trimmed or cut so we could get to the main story.

I can see why the decision was made to do away with the more outlandish elements from previous Bond films (invisible car, anyone?) in this attempt to start fresh, but I question the choice of both Craig for Bond and in the interpretation of 007.  Try as I may I can never shake off the idea that Daniel Craig simply doesn't want to be there, as if this was more a trial he has to endure than something he can somewhat enjoy.

I think it comes from the fact that this James Bond is so morose, grumpy, humorless and crabby.  Even when he's with a beautiful woman (like Caterina Murino's Solange), Craig/Bond looks like frolicking with a beautiful woman is a bit of a bore.  Damn it, I'm sorry, but MY Bond cares if he's martini is shaken or stirred, and I think it was a mistake to turn Bond into this working-class stiff who just happens to kill people.  Yes, that might be how Ian Fleming envisioned his creation, but what good is a spy film if no one appears to be having a bit of fun?

Craig did a good job in looking tough, but I think Martin Campbell could have directed him to show a bit of a smile.  Take the scene where Bond arrives at the Ocean Club and is mistaken for a valet.  When he takes the vehicle and promptly crashes it to another, he looks pissed off.  Even with the second-most serious Bond (Timothy Dalton), you would have seen just a glint of a smile at being a bit naughty.  Craig doesn't appear to have any sense of humor about anything, which makes him hard to embrace.

Making Bond into a grouch is just one thing that I find to dislike about Casino Royale.  Other aspects of the Bond World are inexplicably missing: no Moneypenny, no Q, no quips.  Whenever Craig appears to be making some kind of smart comment, it sounds as if he's being pushed into doing it. The closest I could find were two: when Bond and Lynd arrive in Montenegro and Bond (perhaps humorously) tells her that her undercover name is Miss Stephanie Broadchest (which I think is a nice in-joke about the more outlandish Bond Girl names) and when Bond makes a 'miraculous' recovery from a near-death experience, telling LeChiffre that "that last hand almost killed me".

If you want to have some humor, then have some.  If you have a villain with a peculiar quirk, let's see it.  Even the villain's main attribute (tears of blood) was unimportant.  One doesn't have to make everything absurd, but one hopes a little lightness would be employed in the proceedings.

I think that perhaps by biggest beef is the pacing.  Once we get to the actual game, everything seems to slow down to a crawl.  Those breaks in playing appear to almost necessary to put in some movement; otherwise, you'd have one long boring match (especially for those who don't care all that much about poker).  I also would add that having Jeffrey Wright made the character of Felix Leiter almost nothing more than a cameo (given he wasn't generally important to the story) and was just setting him up for a sequel

However, there are things in Casino Royale that are quite good.  The aforementioned opening action scene is quite thrilling (even if the chase at the Miami Airport wasn't, and the long poker game slowing things down even more), and a wonderful performance by Eva Green as the beautiful and ultimately tragic Vesper Lynd.  Her finale scene where we see that she does love him but knows that she must die is heartbreaking.

We also have a great opening song in You Know My Name, which is as apt a description as can be given about our secret agent.  Chris Cornell's delivery of his song is a notch above some that we've endured, and it is nice to hear a genuine rock song rather than the ballads that appeared to dominate the series.  It's a well-sung and well-written song.

If Campbell, Craig, and the writers had simply lightened up, perhaps the overall dark mood of Casino Royale would have made it more enjoyable to watch.  Again, I don't think the film is terrible, since it has good things (a great opening action scene, with the others being so-so) and strong performances from Green and yes, Craig (even if he is Forever Irritated).  Again, I keep going back and forth on Casino Royale: from hate to love to ambivalence.  Perhaps another viewing would change my view yet again.  Still, when I think of Casino Royale, I think it restored much of the luster of the Bond franchise and is a good step forward.

Next Bond Film: Quantum of Solace
Posted by Rick at 1:34 PM