Doctor Who Story 009: Planet of Giants 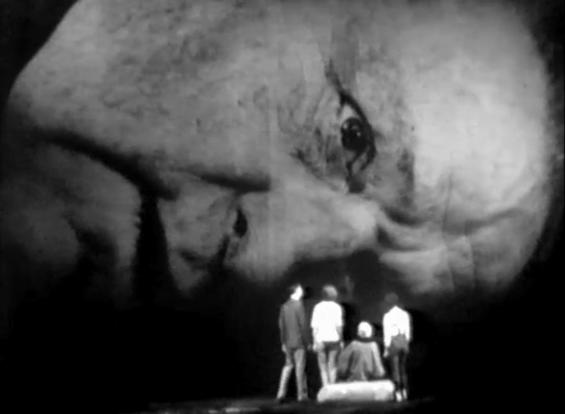 Planet of Giants from what I understand was suppose to be the first story (or at least a version of the story eventually broadcast) to appear in Doctor Who, However, it was rejected as perhaps too ambitious.  The general idea of shrinking our travellers however, was revived later on to appear in the next series.

Planet of Giants was also suppose to be four episodes long.  However, orders from above commanded that a whole episode be lost, thus causing it to collapse elements from Episodes Three and Four (Crisis and the never-aired The Urge to Live) into one episode.  Sad for the story; that decision cost Planet of Giants a chance to be a much better story than the one we have.  However, Planet of Giants isn't bad by any stretch (no pun intended), which is a credit to the production team in front and behind the camera.

While materializing, the TARDIS doors open, causing chaos aboard for the four travellers: the Doctor (William Hartnell), his granddaughter Susan (Carol Ann Ford), and her two schoolteachers, Ian Chesterton (William Russell) and Barbara Wright (Jacqueline Hill).   When they first open the doors, they are thrilled to find they are back in 1960s Earth, but soon it becomes apparent that something is off.  They discover that they have been miniaturized (Doctor, We've Shrunk Ourselves!).

Now they find themselves in a nice English garden, but there is evil afoot.  There is a new insecticide, DN6, that is close to being released on the market.  However, government inspector Farrow (Frank Crawshaw) won't approve it.  DN6 is far too effective: it not only kills insects, it kills all living things, including animals that are important to the environment such as bees or earthworms.  Forester (Alan Tilvern) the financier of DN6, is not happy about learning he will lose millions.  Therefore, he does what all industrialists do: he shoots the inspector.  He also ropes in the weak-willed scientist Smithers (Reginald Barratt) to help him in the cover-up.

The crew realize it's murder and discover that DN6 will unleash on the planet.  Unbeknown to the rest, Barbara has touched some DN6 and she is slowly dying due to its effects.  Now they have to both contact the outside world to stop both Forester and DN6 but also literally grow up and save Barbara.

As I watched Planet of Giants, I thought there was something almost quaint about how poor Barbara has to be the one to face death.   My thinking is that this is 1960s casual sexism at its...finest?  You make the female be the one in danger (far be it for Ian to be the one in danger), and you even give her a fainting spell when she sees a giant fly.

Moreover, I never understood why Barbara kept stubbornly silent about having touched DN6.  One wanted to shout out, "Tell them you're in danger!" but Barbara kept a ridiculous amount of British stoicism.  It only had the effect of making her look almost stupid (as if another cliche: the woman tripping and hurting her ankle while escaping already didn't do that).

However, it's a credit to Hill as an actress that we genuinely cared about Barbara (even if we did puzzle about her choices).  In fact, Planet of Giants is a well-acted piece from the regular cast.  Ford was given a chance to show that she was at least realistic in that she was the first one to realize that they had been shrunk.  We also look at Hartnell to see that he has not only grown in the role but given the character of the Doctor a softer touch.

For example, in the earlier Whos he was remarkably gruff, almost unpleasant and arrogant.  However, in Episode One (Planet of Giants), he does something almost uncharacteristic: he actually apologizes to Barbara for being short-tempered with her.  It was a nice and touching moment that gave the Doctor a more positive spin than perhaps when we began our adventures in the TARDIS.

If there was one exception to the 'good acting' rule it was with Russell, particularly with the first episode.  He was overacting, especially when he came across a dead ant with Susan.  It was almost as if he was trying to make it bad Shakespeare or he didn't believe any of this.  He did improve over the ensuing episodes but in the first one he was not good.

The guest stars played the parts given: the whimpering scientist, the villainous manufacturer, neither being over-the-top or giving them any deeper thought than they deserved.  Unfortunately, there were two supporting characters that suffered because of the decisions at the top.

There appears to be some comic relief through the characters of telephone switch operator Hilda and her husband, Constable Bert (Rosemary Johnson and Fred Ferris respectively).  One would think that they would have had more to do in Episodes Three and FOUR, but given that the decision was made to combine Episodes Three and Four (Crisis and The Urge to Live) into one, a lot appears to have been lost.

This decision in retrospect was a poor one because the last episode appeared to be remarkably rushed.  We had ended Episode Two (Dangerous Journey) with a great cliffhanger: the Doctor and Susan were in danger of being drowned in the sink.  However, once they got out of that danger (hiding in the overflow pipe and the water not reaching that level), how the got the police's attention, had Bert uncover the murder, gotten back to the TARDIS and rescued Barbara (by making her and everyone else grow the effects of the DN6 were minimized until they became almost harmless) seemed to go by too fast.

In the past, I've been critical of stories that appear to stretch the premise, but in Planet of Giants, I think they made everything go too fast.

Moreover, I never quite followed HOW the Doctor managed to make them all grow.  That resolution to their two great crises (their size and Barbara's health) appears a little too pat.  If it were a four-part story, I would say that this is one of writer Louis Marks' few faults: getting to resolve things a little too quickly and conveniently.

On the whole, however, Marks' script is full of good ideas that might have played well if the crew were of regular size.  The themes of environmental protection and the dangers of insecticides (a Silent Spring for the Who viewing audience) would have been interesting to follow if they had stumbled across the murder or if they were on another planet.

I also think that the set design for the TARDIS crew was one of the best in the Classic Era, and the visual effects (from the 'giant' bugs to the giant 'sink' and the blending of the characters and their surroundings) was quite effective.  Granted, today they might appear a little obvious that it was a blown-up picture they were being put in front of or that it was mixing two images, but the fact is that the sets and special effects still hold remarkably well.

On the whole, Planet of Giants is an inventive story that still holds up despite some poor decisions from the front office (particularly in splicing two episodes into one).   The effects and sets are extremely well-rendered for their time (and are still pretty good today), the story blends two (the minituarization and the environmental/murder plot) well.  If not for the relegating of the 'weak' role to Barbara and the rushed conclusion of the various problems, Planet of Giants might have ranked higher.  As it is, Planet of Giants is not one of the great Doctor Who or First Doctor stories, but in no ways is it a minor work.

Next Story: The Dalek Invasion of Earth
Posted by Rick at 11:59 AM