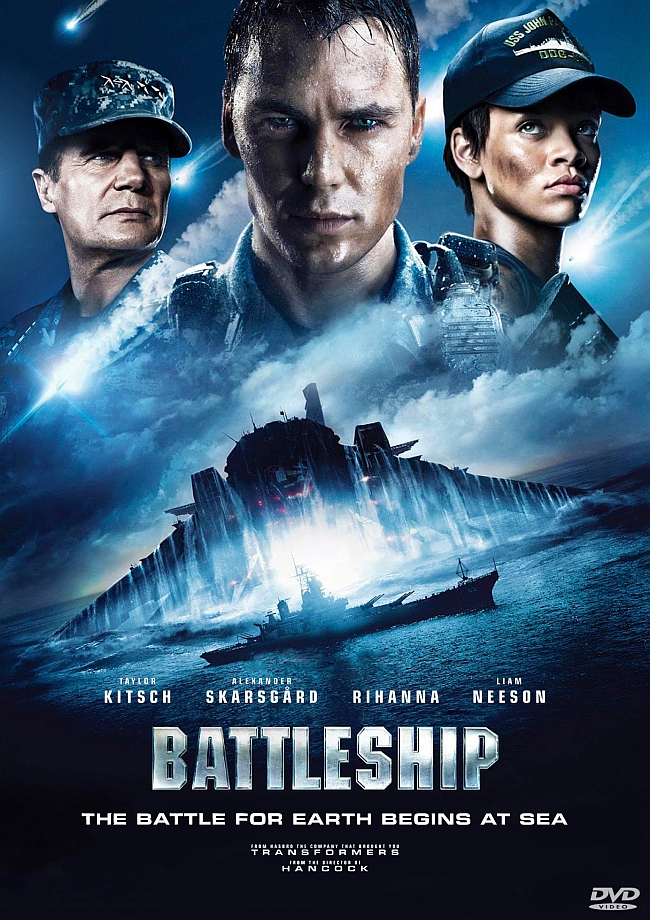 There are some amazing things in Battleship.  It is amazing that this film was NOT made by Michael Bay (the adapter de luxe of lousy toy-based films).  It is amazing that Taylor Kitsch (saddled with the most tempting name in movies today) could have set a course of the worst luck to have been in three failures in a row (John Carter, Battleship, and Savages) despite the push to make him a star.  It is amazing that even for a film based on a game most of us stop playing when we reach teenage years Battleship can STILL be bloated, overblown, and downright stupid.  It is amazing that pop star Rihanna, making her film debut, could manage to outact people who have been doing it for years.

In short, Battleship is amazing indeed: amazing in its ineptness, its tediousness, its length, its overblown weight,  and most of all, it's amazing in its incompetence in just about everything and anything that is associated with the term "film-making".

We start with scientists attempting to make contact with Planet G, the so-called Goldilocks planet (one that is able to sustain human/humanoid life) via the Beacon Project.  Then we shift to Hawaii, where Alex Hopper (Kitsch) is trying to drunkenly impress a girl by breaking into a convenience store to get her a chicken burrito.  This does not sit well with Alex's older brother (Alexander Skarsgard), who forces Alex to join him in the Navy.

Move on to a few years, where Alex is still the irreverent, irresponsible rebel who won't play by the rules, not only irritating Stone but also Admiral Shane (Liam Neeson).  Alex's antics do impress that hot burrito girl, Sam (Brooklyn Decker), who happens to be Admiral Shane's daughter.  Shane doesn't like our hot-heated rebel but it looks like dishonorable discharge will have to wait.  We have an international war games to deal with out in the Pacific.

Meanwhile, the aliens from Plot A have not only made contact but are launching an invasion.  Only scientist Cal Zapata (the Hispanic via Scotland Hamish Linklater) realizes that they can't really be stopped.  An alien craft crashes into Hong Kong, but minus that the invasion fleet seems to be doing OK.  They have trapped the various ships within a bubble, separating groups of ships through a massive invisible wall; the aliens launch pegs at the various battleships, which causes them to explode.

Seriously, I don't want to go on, but I must.

There have been casualties, which have left Alex in charge.  Now he, along with his crew and Captain Nagata (Tadanobu Asano) have to stop this invasion.  Sam, along with amputee veteran Mick Canales (Gregory D. Gadson), do their part when they find themselves near the Beacon Project satellites that Cal has been at and which will serve to help the invasion fleet.

Despite its billing, it was only near the end of the dizzingly two-hour plus film that I actually realized, 'I'm watching a film version of Battleship!'  I don't mean in the 'I didn't know I wasn't watching a film based on a game' type of non-realization.  I mean that at a certain point, the film actually looks like someone took a side of the board and blew it up so we can see Nagata call out point positions to see if they struck anything.

I rallied from the nap I was in danger of slipping into to see that I might as well have just gone to someone's home and played the game to get the same results.  That just sealed the deal with me: it was already bizarre/laughable/stupid to see that the aliens were launching large pegs that Battleship uses to strike at the opponents, but to think people paid to watch a giant-size game of Battleship, one wonders whether anyone should go up to Hollywood and say, "STOP THE INANITY"!

It's curious that of the people in Battleship, only Taylor Kitsch appears to think he's in an actual movie rather than a piece of junk.  I give credit to Skarsgard and Neeson, who decided that they were going to take these Bartha roles and not even bother to act.  Certainly Battleship is a waste of Neeson's talents and Skarsgard's beauty.  Neither of them appear to be taking any of Battleship seriously (I'm sure they'd argue against that, but the proof is on the screen) but Kitsch appears to have convinced himself he was in an actual movie.  As such, he decided to commit to his interpretation of Alex as "James Dean joins the Navy", but one wonders why Sam would want to be with someone who is all bull and no...

Speaking of, while I will grant that Decker is extremely hot (her entrance is something to admire), she really is filling in for Megan Fox in a Megan Fox-type role (hot girl who adds decoration but nothing else to story).  The other woman in Battleship, Rihanna, is the only one to come out relatively unscathed from this fiasco of a film. She looked like she was having fun as the tough and committed sailor, bringing in a realistic toughness to her role.

In regards to other roles, Linklater was miscast as a Hispanic (but since when did that stop Hollywood...it's not like there are any actual Hispanics with enough English proficiency around to be cast in a Hispanic role) and Plemons always looked like Matt Damon's bastard brother.

If that weren't bad enough, Jon and Erich Hoeber's screenplay wastes so much time with things that are really uninteresting and irrelevant.  One could have easily cut out about the first twenty minutes of Battleship involving the burrito stealing (complete with The Pink Panther theme) and the soccer match and gotten just to the story (whatever there was of it).  Finally, the resolution to the crisis: nothing against our WWII veterans, but somehow I kept thinking if I'd wandered onto the U.S.S. Cocoon.

Battleship is a stupid film, a waste of time, with nothing going for it.  If someone during it had said, "You sunk my battleship!", I might have enjoyed it.  However, Battleship didn't even have the wit to be THAT self-referential.