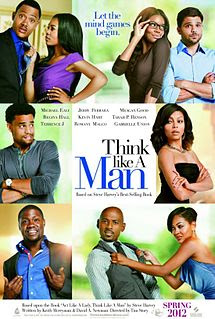 Like this year's What To Expect When You're Expecting (which I haven't seen and thus can't say if it's good or bad), Think Like A Man is a fictional film based on a non-fiction book.  In this case, it's actor/comedian/game-show host Steve Harvey's romance advice guide Act Like A Lady, Think Like A Man.  For whatever reason the folks behind Think Like A Man opted to use the second half of Harvey's book as their title (though we get constant reminders that all the hijinks revolve around both parts of Harvey's tome).

It's already difficult enough to adapt fiction to film (just ask Bel Ami), but adapting a non-fiction book might be just damn near impossible.  I've only glanced at Act Like A Lady, Think Like A Man, but I can say that I found some remarkably good things within its pages.  What that says about how screwed up our society is when the newest love advice to women is, "don't have sex on the first date," I leave up to the readers at large.  What it says about modern romantic comedies that Think Like A Man can be qualified as such when in so many ways it's a rather clumsy, even hateful look at romance in general (and particularly towards its African-American target audience) I can only shake my head sadly at.

We have four couples in the approximately two hours TLAM runs.  First let's meet the men.  We have the Player, Zeke (Romany Malco), the Dreamer Dominic (Michael Ealy), the Non-Committed Jeremy (Jerry Ferrara aka Token White Guy), the Momma's Boy Michael (Terrance J), and the Happier Divorced Guy Cedric (Kevin Hart).  We do have a Happily Married Guy Bennett (Gary Owen) but how he/his character found himself in TLAM one isn't sure of.

Now for the women.  Single Mom Candace (Regina Hall) and Career-Driven Woman Lauren (Taraji P. Henson), along with Eternal Girlfriend Kristen (Gabrielle Union) and Lovelorn Mya (Meagan Good).  Candace and Lauren are best friends, and they happen to find Michael and Dominic respectively (who are also friends).  No surprise that Mya would find Zeke, and Kristen is the one blessed to be shacking up with Turtle...I mean Jeremy.  Cedric spends most of TLAM screeching about his soon-to-be ex-wife Gail (a cameo I'll mention later).

The women at various points discover Harvey's Act Like A Lady, Think Like A Man and decide to use that as their guide to get the men they deserve.  Granted, Lauren was a bit of a hold-out but once things started getting hot and heavy with the beautiful Dominic she decided via a bet that it might be a good idea to follow Harvey's words of wisdom.  The various nuggets surprisingly yield results: Kristen delights in turning the love shack she and Jeremy have been sharing into an apartment where adults live (and removing his fanboy trinkets and figures...have either of them ever heard of a Man Cave?) and the shocking, SHOCKING advise to not be basically a ho on a booty call for Zeke has Mya in the first good relationship she's had.

However, obviously there are complications.  Zeke wants a little something-something, Michael can't get away from placing Candace as his Number Two Woman (one guess who is Number One) and Jeremy still won't grow up (and no that isn't a joke about Ferrara's height).  Lauren and Dominic are a little trickier: this time it's HER ideas about being with a man worthy of HER (or her opinion of herself) that is causing the complications.

Eventually the men discover that the women in their lives have been following Brother Harvey's sermons.  Deciding that two can play at this game, they get their hands on Act Like A Lady...(seriously, any of these people ever heard of a Public Library?) and use Harvey's advise against them.  Hilarity (supposedly) ensues.  Eventually the men are found out (apparently at the same time), the girls wake up, the guys find out they were becoming better men thanks to Brother Harvey, and all our couples (even Cedric and Gail, who looks a lot like talk show hostess Wendy Williams) all end up together.

I could only think that watching Think Like A Man was like watching the world's longest sitcom pilot.  I think it's because it plays like a sitcom: the coincidences, the structure of men are pigs, women idiots, they each have to be tricked into doing things, the happy endings.

One thing about TLAM that brings it all down is that there are simply too many stories to follow.  Again, this is where the sitcom aspect of TLAM comes into play: with so many different threads to hold, each story on its own would have made for a film of various interests.  Having them all together gives us so much story that each thread is short-changed.

Steve Harvey himself pops in at odd moments to offer his words to the wise from his tome, and his appearances seem shoehorned in to remind people, "hey, I, Steve Harvey, wrote the book on romance...literally, so don't forget it".  As I kept watching, I thought somehow that the idea of taking advice from Harvey in an of itself wasn't a bad idea.  It was the execution of it that was bungled.

For example, why couldn't Keith Merryman and David A. Newman's screenplay have done this: have Harvey appear on a chat show (maybe Wendy Williams') and that serve as the link to all the other stories as Harvey profiles his successes.  Or how about this: a book club goes over ALAL, TLAM and they decide to test out his theories, with the wealthy one going to Harvey himself to challenge him or hire him as her own personal coach.  Try this one on for size: the MEN find the book, most scoff, one tries, has success, inspiring the others to try with hilarious results.

There were so many ways to approach the material one is actually saddened that they opted to go for the easiest and dumbest way.

I also found that the men were really so horrible that I wanted them to fail.  Zeke may have tried for an R&B career, but he's more suited for Rapcore given that his theme song should be I Did It All For the Nookie.  Did it not occur to any of the guys that what they were doing was rather sleazy and horrid?  Did it ever occur to the women that these guys are leaning towards loser?

Such is the ways of love.

Tim Story decided that we were going to get more broad caricatures of people than characters.  I'm told that Kevin Hart is a new Comedic Genius.  I know my sense of humor leans more towards the Are You Being Served?/Monty Python style, but why is it that I wince whenever I hear of a new Comedic Genius that I simply don't find funny (examples: Cohen, Sasha Baron; Cook, Dane; Ansari, Aziz). His constant whining (along with his high-pitched voice) was grating on me (especially since we had Hart do the voice-over narration), and I thought we could have done without his character.

Whatever Hart's flaws as a comic or actor, seeing alleged woman beater Chris Brown (as the hot guy Mya hooked up with who can't remember her name no matter how many times he runs into her...as opposed to running his fists AT her) was simply inexcusable.  I could leave it at the fact he wasn't necessary to the plot, but I'll go a little deeper to say that a film about relationships featuring Chris Brown is downright disturbing.  Really want to take romance advise from him?

It's just a constant parade of dumb people doing dumb things to each other and themselves.  Every other person save Hall and Terrance J appeared to be going as broad as possible (even Henson, who is an Oscar nominee!).  Oddly, the Michael/Candace story appeared to be the only one to come close to playing their relationship in anything resembling a realistic one.

As a side note: sorry Ferrara, you'll always be Turtle to us, and no matter how fictional the movie is, one can't accept anyone like Gabrille Union would be living in sin with you for nine years with all your Transformer toys and not have said something a long time ago...let alone continue sleeping with you willingly.

Think Like A Man tries so hard to make it like a Battle of the Sexes but the guys are so unlikeable and the women so dumb we want them to fail.  I did laugh twice: once when a clearly befuddled Bennett commented that they show a lot of civil rights documentaries around February for some reason and when Ealy's Dominic dismisses watching For Colored Girls by saying that 'some crazy guy throws his kids out the window' (the humor, for those of you not keeping score, is because Ealy played that 'crazy guy').  That was funny, and more cleverness like that would have pushed Think Like A Man to being something other than what it is: a sub-par attempt at romantic comedy that never goes away from cliches of all stripes. 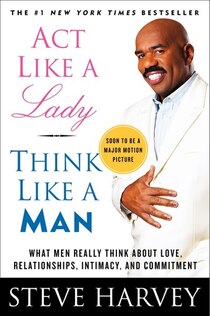 This is a case where the book is definitely better than the movie.