The Strength Of A Child

This is the famous opening line to A Tale of Two Cities by Charles Dickens (one of my favorite books).  The genius of Dickens endures, as does his accurate description of how we perceive our world.

We live in a time when the world's information is available at the literal push of a button yet have a whole generation that appears to be proud of their rank stupidity.  This is a schizophrenic society: one that celebrates both Steve Jobs and Nicole "Snooki" Polizzi, the genius and the imbecile.  Here in the United States, for all the talk of a "War On Women" that the political world has declared, we forget that in other parts of the world, there is a literal War on Women that makes any American discussion appear foolish.

The girl above is Malala Yousafzai.  She is fifteen years old.  She was shot and nearly killed for the crime of wanting an education.

Whatever flaws Mitt Romney has, he's never called for girls to be murdered for wanting to go to school.

Yousafzai lived under the Taliban regime in Pakistan controlled by them.  This group of "devout Muslims" believe that women are so inferior to men that they not only must be fully covered and be escorted by men at all times in public, but that they should remain illiterate, uneducated, and subservient.

Yousafzai did not believe that.  She wanted an education.  She wanted a life of her own while being a faithful Muslim.  She did something that would be remarkable at any age, even more so for a child: she spoke out.  She would not be intimidated into silence but instead let the world know of what life for women under the Taliban was like. The Taliban kept blowing up schools rather than let girls be educated.  One wonders why a group of uneducated men appears so determined to keep women from being uneducated themselves.

Yousafzai did not keep silent.  She kept speaking out and more importantly going to school.  It was after one school day that the Taliban got a divine revelation that Allah wanted little girls shot in the head to please Him.  On October 9, 2012, Malala Yousafzai, age fourteen, was shot twice: once in the neck, and once in the head.

Let's think on that for a moment. A fourteen-year-old girl was shot in the head for wanting to be educated.

And Americans claim there's a "War On Women"?

The positive thing in this horror is that the Islamic world finally appears to understand that savagery cannot be tolerated.  Vigils were held for her recovery, and Islamic clerics finally issued a fatwa or decree denouncing the assassination attempt and condemning the Taliban.  It seems that Muslims in Pakistan and perhaps Afghanistan (and I hope around the world) are starting to see that little girls, or children in general really, cannot be shot or killed because someone decided they shouldn't read.

The murder or attempted murder of children is barbaric.  If the Islamic world had held its tongue and not acted, it might forever lose any credibility about it being a faith-based system.

We must be respectful of each other's differences.  Benito Juarez, the first President of Mexico, once said that "respect for that which is different is peace".  He didn't say we had to approve of what was different, merely that we had to accept that not all of us would see things the same way.  With that respect towards that which is different, we would have true peace.  That is a philosophy that still holds true today.

Ultimately, I look upon Malala Yousafzai as a heroine, for speaking out, for taking a stand, and for literally risking her life to improve her status.  Would that more Americans, men as well as women, learn from her example.

What does it say about American society when the girl we admire or are fascinated with is not one who risks her life (and nearly loses it) to get an education, but one who revels in her vulgarity, ignorance, and narcissism? If I had a choice, I'd have Americans follow Malala Yousafzai rather than Alana Thompson, nom de horror Honey Boo Boo.

Whom would YOU want as your daughter? 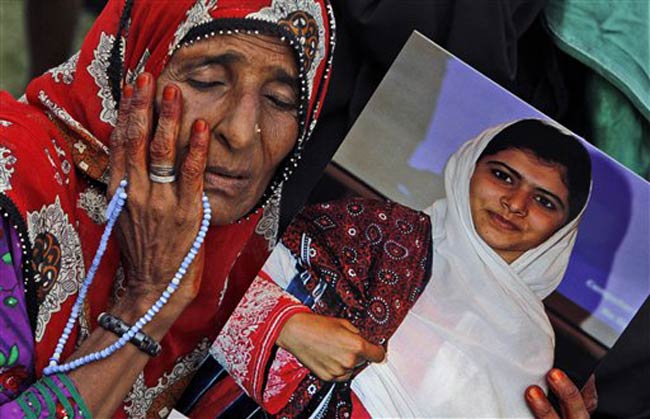 I, as a Christian, join in prayers for Malala Yousafzai. I urge all of us: Muslim, Christian, Jew, Sikh, Hindu, and all other faiths, to pray for her and all the girls and boys who yearn for freedom and peace.  A Better World For ALL of Us.
Posted by Rick at 8:32 AM