Shang-Chi and the Legend of the Ten Rings: A Review 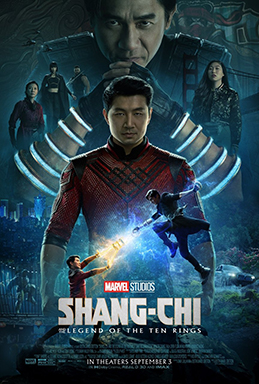 SHANG-CHI AND THE LEGEND OF THE TEN RINGS

The Marvel Cinematic Universe chugs on, now on its "Phase Four", building up a new de facto season for the fanboys to enjoy. Shang-Chi and the Legend of the Ten Rings is pleasant, sometimes quite lovely to look at, but also perfunctory and a bit cold and remote.

Shaun appears to be a quiet, mild-mannered parking valet. That is, until he and his BFF Katy (Awkawfina) are attacked on a San Francisco bus. Here, he becomes a master martial arts fighter and reveals his true identity: Shang-Chi (Simu Liu). He is the son of Wenwu (Tony Leung), a thousand-year old criminal mastermind who possesses great power thanks to his mastery of The Ten Rings, a mystical talisman.

Wenwu Xu once conquered worlds until 1996, when while searching for the mythical land of Ta Lo, he met his match in the beautiful Ying Li (Fala Chen), a guardian of Ta Lo who can fight Wenwu on his level. Naturally, they fall in love but he is denied permission to live in Ta Lo, so they leave to start a family: first Shang-Chi and then his sister Xialing (Meng'er Zhang).

Shang-Chi searches for his long-lost sister, who runs a Macao fight club. Wenwu has sent mercenaries for both of them, but it is to seek their help. Wenwu is convinced Ying Li is not really dead, but held prisoner at Ta Lo. Both siblings know their mother is dead, killed by a rival gang which pushed Wenwu back to a life of crime. They go in search of Ta Lo, aided by the unlikely help of Trevor Slattery (Sir Ben Kingsley), the whacked-out actor who masqueraded as "The Mandarin" from Iron-Man 3. Now sober, Slattery had made friends with a Ta Lo creature, who helps guide them to Ta Lo.

Here, they meet their Aunt Ying Nan (Michelle Yeoh), who essentially gives Shang-Chi, Xialing and Katy a crash course in defense against both Wenwu and his plans, which are all part of machinations to manipulate him into releasing the Dweller in Darkness, who has been held prisoner at Ta Lo for eons. Wenwu's power of the Ten Rings can release the Dweller, so it is up to the others to stop him and save both the world and Wenwu's soul.

The best compliment I can offer about Shang-Chi and the Legend of the Ten Rings is that it is...pleasant. I freely admit I am not a Marvel fanboy, waiting breathlessly for the next installment of the world's longest and most expensive soap opera. As such, the various characters that pop in and out, such as Benedict Wong's Wong from Doctor Strange don't excite me. I genuinely struggle to so much as remember their names, let alone what their roles are.

As a side note, I fear the Marvel Cinematic Universe is becoming the world's longest and most expensive live-action cartoon, but that's neither here nor there at the moment.

In fact, these appearances appear to be part of what I see is the overall problem with both the MCU in general and Shang-Chi in particular. There is now a rote manner to these films, a routine, yes, a formula that after thirteen years has grown stale. As I watched (at times struggling to stay awake), I found something that I had not felt or remember feeling even among the worst MCU films like The Dark World or Guardians of the Galaxy Vol. 2.

I felt absolutely nothing.

If I did feel anything, I felt Shang-Chi was so remote, so distant, so uninteresting. Writer/director Destin Daniel Cretton (writing the screenplay with Dave Callahan and Andrew Lanham) wanted to hit a more emotional, character-driven Marvel film separate from the usual superhero action. All well and good, but I left feeling so cold to the story. It may be because a lot of focus was given to the family dynamics, but Shang-Chi stumbled over odd inconsistencies in it.

I can't get over how at one moment, Wenwu condemns his son by saying "You watched (your mother) die" and the next moment be absolutely convinced that his late wife was very much alive and held prisoner. To my mind, it didn't make sense but was needed to move the plot forward. 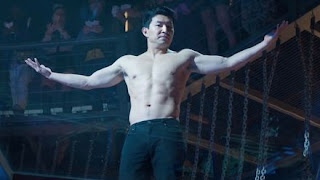 I am not throwing away the positives. Sir Ben Kingsley was clearly in on the joke as the totally whacked-out Trevor, lending a good amount of humor into things. That is not what Awkwafina did, her style of comedy more forced and unreal.

As a side note, her becoming some kind of Warrior Princess in the span of apparently a couple of days is both unbelievable and expected.

Liu's Shang-Chi/Shawn was fine, nothing extraordinary but nothing terrible. I put that down to the failure of the script to give him much to work with versus any genuine lack of acting ability. He did everything that was expected, nothing more, nothing less.

That pretty much sums up Shang-Chi and the Legend of the Ten Rings. It was...fine. It isn't terrible. It isn't brilliant. It is just there.

I do remember that some of the kids watching the film said near the climatic battle, "He's the Lord of the Rings". In a sense, it is true.