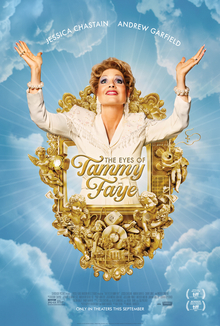 THE EYES OF TAMMY FAYE

Jim and Tammy Faye Bakker were seen, even before their spectacular fall from grace, as tacky, tawdry and gaudy. The garish clothes and makeup turned our preaching pair into parody, where any good the Bakkers accomplished was either washed or forgotten. Judging from the end results of The Eyes of Tammy Faye, those involved in the film decided to lean heavily into the cartoonish and freakish spectacle of their lives rather than attempt to try and humanize these unholy figures.

As a child, Tammy Faye feels the Spirit, though as the daughter of a divorcee she is not altogether welcome into the Pentecostal church where her divorced mother Rachel (Cherry Jones) plays piano. However, neither the Spirit or Tammy Faye will be denied.

It isn't long before Tammy Faye (Jessica Chastain) goes to Bible college over her parents objections. More objections come when she marries Jim Bakker (Andrew Garfield), an early proponent of Prosperity Gospel theology. Soon, they start their journeyman preaching, eventually taking their children's show to the Christian Broadcasting Network and its powerful magnet, Pat Robertson (Gabriel Olds). While he and fellow minister Jerry Farwell (Vincent D'Onfrio) plot to use their power to rule the Republican Party, all Tammy Faye wants to do is help the gays.

Tammy and Jim decide to break off into their own rival television empire, and thus the Praise the Lord (PTL) Ministry was born. Soon, the money came rolling in, though with it came depression, prescription addiction and sexual temptation for both Jim and Tammy Faye. As their empire grew, then collapsed, Tammy Faye is forced to rebuild her life away from Jim. 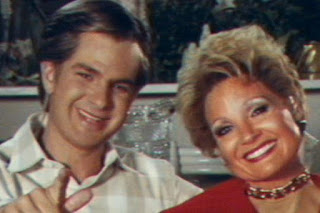 It takes a certain amount of skill to take a couple that is already gaudy and cartoonish and make them look MORE gaudy and cartoonish, so on that level The Eyes of Tammy Faye should be congratulated. Here are two figures who came across as insincere at best, downright loony at worst; instead of trying to find the lost people behind the personas, The Eyes of Tammy Faye doubled down on how oddball Jim and Tammy Faye apparently were.

The majority of the blame falls to two people: screenwriter Abe Sylvia and director Michael Showalter. Showalter opted to tell his performers to emphasize the insincerity of the Bakkers in how they presented themselves both publicly and privately. Even when we could have had more human moments, such as when Tammy Faye is interviewing an AIDS patient on The PLT Club, Chastain comes across not as Tammy Faye, but as a Saturday Night Live sketch.

Chastain and Garfield went deep into making the Bakkers look like complete crazies. Not once did either of them look like genuine people but instead look like over-the-top spoofs. There is just such an exaggerated manner to their performances, such a forced manner, that it never comes across as real. Even if we grant that the real Jim and Tammy Faye were a bit over-the-top, a great opportunity to find the real people there.

The only genuinely positive quality Tammy Faye appears to have (a more open and tolerant view on homosexuals versus the Church General) is lost not just in Chastain's overtly garish performance but in Sylvia's screenplay. This is combined in D'Onfrio's Jerry Farwell. Not only does D'Onfrio neither look or sound like Farwell but The Eyes of Tammy Faye went all in on a fixation on how "evil" both he and Robertson were. While Jim Bakker comes across once or twice as trying to find a balance between faith and politics, D'Onfrio's Farwell was written and directed to focus solely on his homophobia and lust for power. 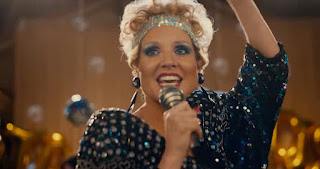 The Eyes of Tammy Faye is also done in by its production. At one point I actually gasped at a musical montage that can best be described as "Disco Gospel". When the film closes at what is meant to be Tammy Faye's triumphant comeback at the religious Oral Roberts University, Chastain's Tammy Faye Bakker looked like a young Dame Edna.

Was that the goal of The Eyes of Tammy Faye: to make the title character look like a drag queen?

While Chastain has received much praise for her performance, I cannot share in the enthusiasm. I found it cartoonish and overtly insincere. Chastain bears some of the responsibility, but Showalter directed her to be cartoonish and overtly insincere. The script did not help matters. If The Eyes of Tammy Faye is to be believed, she was genuinely unaware she was overloaded with makeup. Moreover, the film hints that Jim may himself be gay or bisexual, such as when a tickling session with a male friend has ominous music and Tammy's sad look. However, even if he is, what it has to do with anything is unclear, as unlike Farwell or Robertson he does not say anything specifically against gays.

I'm going to walk that back a bit, for the tickling may have come before a joke, but I cannot remember the joke to say if it was homophobic or not.

The Eyes of Tammy Faye is too wrapped up in the trappings of this personality to find the woman within. It's a terrible shame, for as gaudy as Tammy Faye Bakker may have been, there was a real figure behind it all.