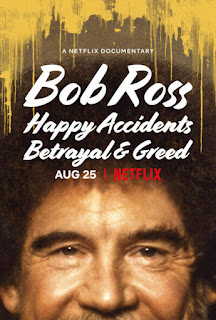 I confess to not being a Bob Ross fan. It's not a personal dislike for the late painter beloved by millions for his soothing voice, pleasant on-screen manner and landscape paintings. At most, it's a general disinterest. Still, he has become an American cultural icon. Bob Ross: Happy Accidents, Betrayal and Greed would like viewers to think it will delve into a more dark side to the world of happy trees and pleasant winter scenes. However, the film suffers from a lack of focus, hitting a lot of marks but not getting far in many of them.

Bob Ross: Happy Accidents, Betrayal and Greed is part hagiography, part exposé and a dash of inspirational stories involving the painter.  We learn through his son Steven, a painter and instructor in his own right, about his father's entry into the art world. Painting was a joy for Ross, and after finding the alla prima or wet-on-wet technique from painter William Alexander (who had his own show, The Joy of Oil Painting), it wasn't long before Alexander became a mentor to Ross.

Ross began teaching courses under Alexander's brand, where he came upon Annette Kowalski. She was a grief-stricken woman who found peace through The Joy of Oil Painting viewing. At first disappointed to find Alexander was not teaching at her instruction seminar, she quickly changed her mind, finding in Ross someone who could go on his own. Along with her husband Walt, she got Ross to replicate Alexander with his own The Joy of Painting program, growing it into a wildly successful venture.

However, as time goes by, we see the Kowalskis as evil, taking advantage of a genial and later ill Ross to take his name and likeness for their own lucrative business. After Ross' death in 1995 the Kowalskis turn the Bob Ross Certification courses into a neo-terrorist endeavor, and cut out Steve from his share of profits. Their hold over Bob Ross, Inc. is so great that over a dozen people declined to participate in the documentary, fearing litigation from the Kowalskis. 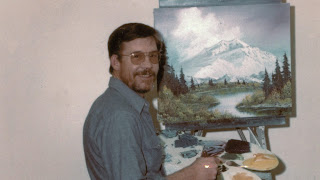 I see the Bob Ross phenomenon with a puzzled eye. I find his paintings to be kitsch, a variation of Thomas Kinkade in terms of artistic merit. I can see the appeal of Ross in that he essentially painted optimism and brought joy to many people due to his pleasant manner and sotto voce delivery. However, as nice and pleasant as the myriad of Ross landscapes are, I personally find nothing in them that says they are great art.

Again, like Kinkade's paintings of quiet, light-filled pastoral scenes, the mountains and happy trees of a Ross painting feel a bit hollow. There's nothing wrong with comfort or kitsch, and I certainly won't take away the pleasure the Ross paintings brought and still bring to people. It's just that I see them and think they are pleasant but not extraordinary. Yes, anyone can paint but can anyone create the Sistine Chapel ceiling, The Thinker or Guernica?

Therefore, I am not attached to Bob Ross the persona as much as his fans, and I see Happy Accidents as a bit confused. There is a curious struggle to balance the wonderful memories Ross evokes among those interviewed with what the film looks at as the Kowalskis nefarious acts. Even the affirmation that Ross and Annette had an affair seems more a blip than a revelation to shock. How long was the affair? Why did they engage in mutual betrayals of their respective spouses? How did it impact their working relationship?

Happy Accidents does not answer those questions, preferring to move on to more of how nice and unassuming Ross was, almost oblivious over how the Kowalskis were taking him to the cleaners until he is dying. 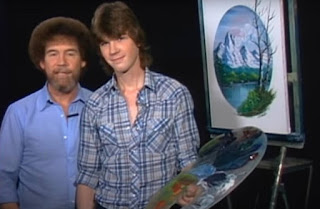 As a side note, while Ross and Annette may have had an affair, it seems slightly hysterical to believe given that by all appearances Annette is old enough to be Ross' mother.

We do get information as to how duplicitous the Kowalskis, or specifically Annette, may have been when after Ross' death she hosted her own show where she apparently and shamelessly stole the techniques from Gary and Kathwren Jenkins. These artists who also had their own television show were driven out of the television painting business due to Annette Kowalski apparently stealing their methods and suppliers. They Kowalskis even apparently manipulated Ross' half-brother Jimmy Cox to sign away the rights to Ross' name and likeness, leaving Steve Ross out in the cold.

Perhaps if Happy Accidents had focused more on the Kowalskis alleged antics and less on how wonderful Bob Ross was, we could have had the darker tale director Joshua Rofé was aiming for. However, Happy Accidents sometimes forgot all about the Kowalskis, so we were left with more a standard biographical documentary on the happy forest ranger for the happy trees.

Part of me wonders if Ross really was as naïve and unaware as he is shown. He might not have cared about the fortune The Joy of Painting and the workshops were raking in for him, but he at least should have been aware that his name and likeness were marketable. After all, The Joy of Painting was it should be remembered, essentially an informercial for the Bob Ross Painting Workshops. Also, for all the criticism that the Kowalskis get for commercializing Ross' name and likeness on all sorts of merchandise, Happy Accidents isn't questioning those who would buy Bob Ross Chia pets or related rubbish, enriching the Kowalskis on Ross tchotchkes.

Worse, the last minutes of Happy Accidents were used up by testimonials of people who were metaphorically saved thanks to Ross' Joy of Painting and courses. There too is a ready-made subject, divorced from the Kowalskis machinations that would make a greater case for the importance Bob Ross has to people.

That kind of story I would like to see, but the efforts to make Happy Accidents a scandalous exposé fails, H. Scott Salinas' overtly ominous score not making things better. The film is good for diehard Bob Ross fans, but it still leaves much to be desired. This is especially true when after watching Bob Ross: Happy Accidents, Greed & Betrayal we find that sadly, there is no real Joy in Painting.