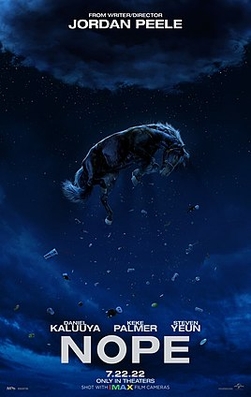 From what I have seen of his work, Jordan Peele loves science-fiction and horror. Get Out, Us, a revamped The Twilight Zone, Peele has shifted from his early days on Mad TV and Key & Peele. Nope is his first science-fiction feature.

My review is pretty simple: I nodded off.

OJ Haywood (Daniel Kaluuya) is struggling to keep the family's horse training facility Haywood's Hollywood Horses going after his father's death. His sister Emerald (Keke Palmer) would rather sell it to pursue her own Hollywood dreams, but the taciturn OJ won't give up on it.

The Heywood ranch neighbor, like the Heywoods, has Hollywood history too. While the Heywoods descend from the first person captured on film (the jockey from the 1887 photographic experiment A Horse in Motion), Ricky "Jupe" Park (Steven Yeun) is a former child star. His claims to fame are starring in a kid show, Kid Sheriff, before costarring with a chimp named Gordy in Gordy's Home!. That show lasted two seasons due to how one of the chimps playing Gordy went bonkers, killing the cast when a balloon triggered him, leaving only Jupe alive.

Now Jupe runs a Western-themed play area, Jupiter's Claim. OJ has started selling his horses to Jupe, and is now contemplating selling him the abutting ranch too. That is, until otherworldly beings start menacing the area. To capture them on film (the Oprah shot as Emerald describes it), they get Angel (Brandon Perea), a Fry's Electronic employee. Later on, they recruit Antlers Holst (Michael Wincott), a cinematographer who rejects electronic equipment.

Jupe's plans to "lasso" the UFO meet with a grisly end for his park guests and his family, but the Haywoods may be able to capture the creature on film while also surviving its hunger. 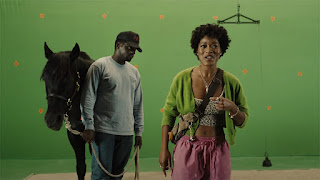 I do not know what it says about Nope that I nodded off at what I figure was meant to be a big moment: the climatic confrontation between the Haywoods and the UFO. I think it is because by this time, Nope had long overstayed its welcome. At over two hours, Nope not only feels much longer, it adds elements that don't fit into whatever story it was looking at.

Perhaps it seems too much to focus on, but I think Nope is so hopelessly bloated that it shifts away from what could have been a more entertaining film to say nothing. 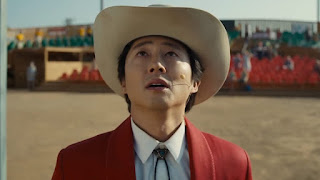 I think of the performances and wonder what Peele was aiming for. I think Kaluuya and Palmer played their parts correctly, but that does not mean they were good parts or performances. The former's OJ is so catatonic that he might as well be asleep. I think that was the part, but it does not make one interested in seeing someone who is disengaged from the world survive. The latter's Emerald is the opposite, so loud as to be parody. Yeun was closer to Kaluuya's vastly understated manner, as if he was just there (and wasn't sure why).

Brandon Perea's Angel had moments where he could have come across as a wacky UFO enthusiast or believer, but he by the film's end fell into line of the not-enthusiastic manner. I found Wincott's performance funny, but not in a good way. It's hard, even with a gravely voice, to make the novelty song The Purple People Eater sound menacing versus as hilarious as it came across as.

Mercifully, if there was any symbolism in any of this, it mercifully went over me. I'm sure many will find much in Nope that is deep or a commentary on something. For my part, I found nothing there.

In the end, would I watch this film again? Let me think of a word...