Get Out: A Review

I have not seen an episode of Key & Peele, but I am assured that they are 'comedic geniuses'.  Frankly, I am dubious of this, not because I have any proof that Keegan-Michael Key and/or Jordan Peele are not, but because many people promoted as today's 'comedic geniuses' are ones I don't find funny (Aziz Ansari, Samantha Bee, James Corden).  My idea of comedic geniuses are Richard Pryor, George Carlin, Carol Burnett, Lucille Ball, but that's just me.

In any case, we have Get Out, Mr. Peele's directorial debut film that is a horror-comedy.  I can see Mr. Peele knows and uses the conventions of a stereotypical horror film to tell his story, but I am perplexed as to why the reviews have been so rhapsodic.  It is not a bad film, but it is a story cobbled together from other stories, which I find better-told.

Essentially Guess Who's Coming to Dinner? with a horror bent, Get Out is about Chris Washington (Daniel Kaluuya), a young photographer going up with his girlfriend, Rose Armitage (Allison Williams), to meet the parents.  Chris is Black, Rose is White, and Chris is highly concerned that the reaction will be less than positive.

He need not have worried, for Rose's parents Missy (Catherine Keener) and Dean (Bradley Whitford) are more than accommodating.  In fact, they seem extremely pleased to have him.  Actually, they seem a little too pleased, as if they want to show how 'woke' they are with Rose's newest boyfriend.  Dean in particular seems to want to please Chris greatly: asking how long this 'thang' has been going on, and telling Chris not only would Dean have voted for Obama a third time, but that he was the greatest President we have ever had.

At this point, I thought how funny it would have been if Chris had been a Republican who disliked President Obama's policies, but such moments were not to be.

Chris is a little ill at ease by not just the Armitage's eagerness to please, but also by their staff: the maid Georgina (Betty Gabriel) and groundskeeper Walter (Marcus Henderson).  There is something zombie-like about them, for they are very docile and happy in their place.  Even worse, Missy, a hypnotherapist, has managed to hypnotize a reluctant Chris.  She insists it is to help him stop smoking, but as his mind is taken over, he finds himself powerless when he slips into a semi-conscious state she calls 'The Sunken Place'.

As a side note, perhaps The Sunken Place would have been a better title than Get Out, but that's just me. Chris, and Rose apparently, are surprised to learn that the Armitage's annual reunion party is that same weekend.  Chris' discomfort grows as he meets the various white guests, all who make bad attempts at ingratiating themselves (one says he knows Tiger Woods, another telling him 'black is cool'), and worse, another couple literally feeling his body and commenting on the firmness of it.  About the only person who seems semi-rational is Jim Hudson (Stephen Root), a blind art dealer familiar with Chris' work as a photographer.

Chris finds exactly one other African-American among the guests: Logan (Lakeith Stanfield), who bizarrely is married to a white woman a good twenty to thirty years his senior and whose outfit is befitting the 1930's than someone his age.  Logan, like Georgina and Walter, seems almost robotic in his manner: pleasant but highly unresponsive to Chris' confusion about how every African-American in this area behaves so compliantly.  It isn't until Chris sneaks a picture of Logan and his wife that Logan has a breakdown.  The flash of Chris' phone awakes Logan somehow: his voice and manner change, and he becomes hysterical, screaming at Chris to 'get out'.  It takes a lot to get Logan back on track, and while Dean claims it was an epileptic fit, Chris' fear now knows no bounds.

All this time, Chris' friend Rod Williams (Lil Rel Howery), a TSA agent whom he communicates with through the phone (when Georgina isn't unplugging it to keep it from charging), keeps urging Chris to leave too, convinced that the Armitages and all their friends are using blacks as zombie-like sex slaves.  Rod also finds that Logan is really Andre Hayworth, a musician who had disappeared without a trace.  Chris, despite common sense, finds that the Armitages are now holding him hostage.

The reason for Chris' now-abduction become shockingly clear whenever he is awakened from his hypnosis: it's the Coagula: a method created by Dean Armitage's father to transplant white lives into black bodies to keep them from dying.  Technically, the people whose bodies have been snatched are still in there, only in 'the sunken place', unable to do nothing but sit and watch as these white people reside in them.  Chris has been bought by Jim Hudson, who wants his sight back.  It is now a desperate race for Chris to escape and bring the whole ugly business to a violent and bloody end.

For me, a good horror film in this vein, there has to be an element of doubt, that perhaps some oddball moments can be explained.  With Get Out, I don't think they can be.  It's all so obvious, and one would think Chris would be able to stand up for himself and answer the very irrational questions and comments, or at least tell them how inappropriate they were.

As a side note, I would have a question for Peele, who not only directed but wrote Get Out.  Why would anyone have candles in an operating room?  I know that they were there to 'set the mood' and to cause the fire that would set the whole enterprise ablaze but I could not get over the illogical nature of having candles in operating rooms.  Then again, I am the type of reviewer to get hung up on details. 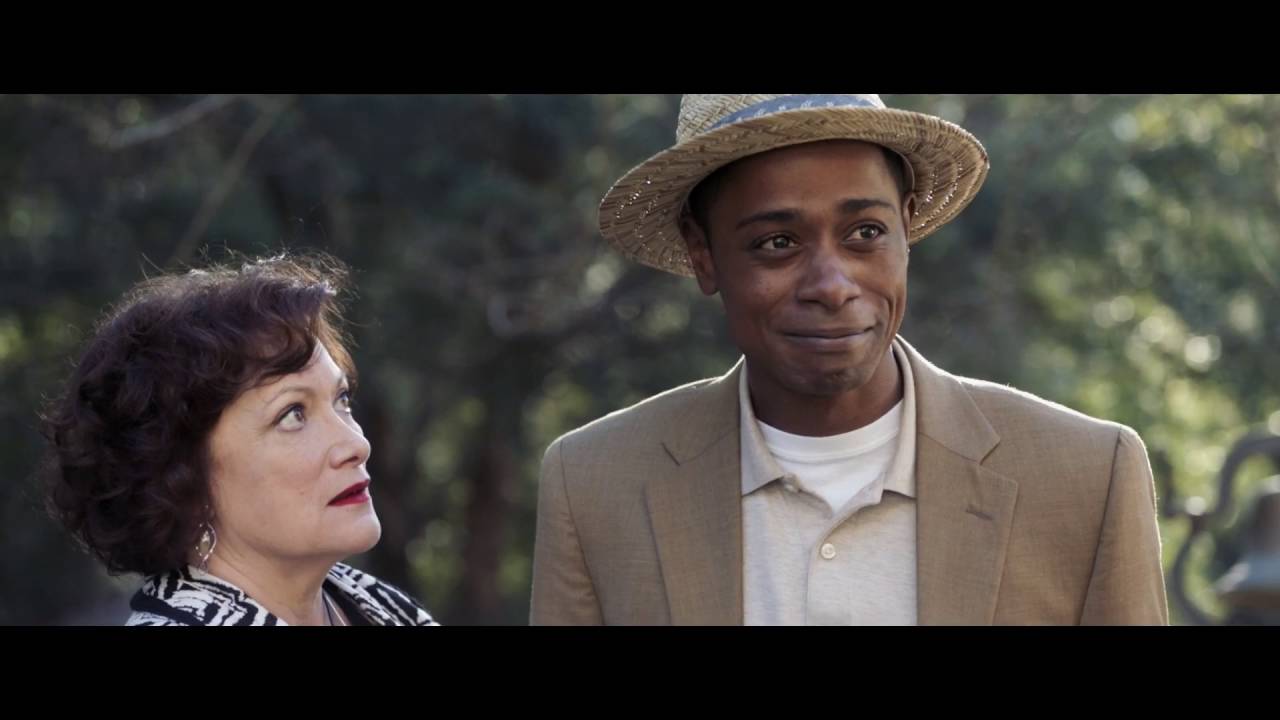 It isn't that I don't get that Get Out is not just a horror film, but a commentary on race in America through Peele's own prism.  In this world, even to white liberals, black lives don't matter apart from what they can get in this case literally get from them.  Peele wants to send a message about race: whites, regardless of ideology, are essentially interested in blacks only insofar as what purpose they serve and not as individuals.   All well and good, but I was not overwhelmed with the message to Get Out as perhaps I was expected to be, perhaps because as a Hispanic I have little 'white privilege' to work with.

I certainly can't complain about the technical aspects to it.  Peele knows the conventions of a horror film: the creepy music punctuating scenes, the spooky visuals (in particular the 'sunken place' sequence that is effective in heightening the fear factor).  I also can't complain about some of the performances: Kaluuya is a standout, particularly in his dramatic scenes when he remembers his late mother, though he's less effective when he is supposed to be growing in his fears about the Armitages.

The real standout is Howery as our intrepid TSA agent Rod Williams.  I would love to see a movie about him: a man who perhaps a bit off in his theory (they weren't being taken to serve as 'sex slaves'), was desperate to save his friend and knew something was wildly amiss.  Why Chris did not know that I can't figure out.

I would put the fact that just about everyone else was directed by Peele to be overtly creepy and obviously dangerous.

And I still want an explanation about those candles in the O.R.