The Alienist Episodes 1 and 2 Review

I know of but never read The Alienist, the popular Caleb Carr novel.  Now, TNT has adapted The Alienist into a limited series, and has made the first two episodes available for review.  The Alienist is well-produced, with strong performances and effective atmosphere.  Granted, the lurid and disturbing elements of this story might put off some viewers, and my impression is that The Alienist is very much indebted to Sir Arthur Conan Doyle.  On the whole, however, I found The Alienist works well and barring wild changes, please its readers.

Again, this review covers the first two episodes made available to reviewers.

It's New York City, 1896.  A young boy prostitute has been murdered in a particularly gruesome manner: dismembered, throat slashed, eyes gouged out.  The boy, Giorgio Santorelli, worked in a child brothel and went by the name 'Gloria', which is not surprising given that Giorgio was discovered in drag.  Newspaper illustrator John Moore (Luke Evans), himself no stranger to real 'ladies of the evening' is dragged out of an assignation with his favorite good-time girl to draw the corpse.  He hoodwinked his way to the crime scene, where despite his misgivings, Police  Commissioner Theodore Roosevelt (Brian Geraghty) allows him to take a look...if he can stomach the sight.

Moore, who also does society portraits, does this at the behest of Dr. Lazlo Kriezler (Daniel Bruhl), who studies mental illnesses.  To use the parlance of the times, Dr. Kriezler studies and helps those who have 'alienated' themselves from their true nature, hence 'the alienist'.  A modern man of science, he slowly comes to believe this is the work of someone who has killed before in the same way, remembering the death of Benjamin Zweig, a young boy murdered with his sister.  Benjamin had started dressing as his sister early on, and his parents had gone to Dr. Kriezler for help.  He told them that it was Benjamin's nature to cross-dress and they should accept it.  They didn't, the children ran off, then were murdered, with Benjamin found in drag. 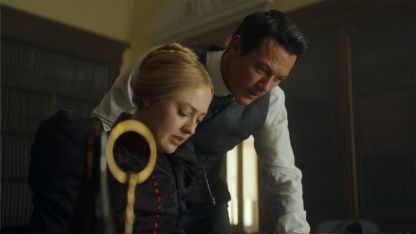 Into this investigation comes Sarah Howard (Dakota Fanning), Commissioner Roosevelt's secretary and the first woman to hold any position in the New York City Police Department.  She and John have met socially but Sarah is not fond of him.  Despite herself, she becomes more involved in the investigation, one that Commissioner Roosevelt is displeased about but which he again gives way to.  To help, Roosevelt gives leave for two officers to help Kriezler in the more technical aspects: the Isaacson Brothers: Marcus (Douglas Smith) and Lucius (Matthew Shear), held in low regard by the other NYPD officers because of their scientific bent and Judaism.

Moore has his own ad hoc investigation by going into the Paresis, the den of iniquity that would be the Gilded Age's version of a gay bar/brothel/drag show.  Moore is equally shocked and repulsed by it all: the boys parading in dresses, the homosexuality (though whether the 'ladies' are actually homosexual or 'gay-for-pay' is unclear).  Moore is taken by "Sally", who isn't very helpful in providing information on Giorgio/'Gloria'.  He, however, was drugged by the owner, and Moore struggles to control himself, more 'girls' are brought in. I leave it to you do decide whether the sight of young boys in drag approaching a middle-aged man in a scene reminiscent of the flashback of Suddenly, Last Summer is threatening or slightly camp.

It is hard to judge how successful a new series is based on just two episodes, but for what I saw The Alienist has some major pluses to it.

At the top are the performances.  In my world, there can never be enough Dakota Fanning.  Her Sarah is a strong woman, particularly in a very dark man's world.  She is the antithesis of the 'delicate flower' men like Moore might hold her as.  However, she is also one who is smart enough to know how much to push for in the constricted age she lives in, with that constriction going down to the corset society compels her to wear.

Fanning has a wonderful moment in Episode Two when she declines the offer of being walked from the carriage to her doorstep after Kriezler makes clear her invaluableness as the intermediary between his team and Commissioner Roosevelt.  As she walks home, we see her smile, the delight Sarah takes at being taken seriously communicated so well by one of our strongest and most competent young actresses.

Evans' Moore has the major strength of finding some humor in his frustration at finding himself dragged into things he would rather not do.  He has a sly humor to him that he, like Fanning, communicates without dialogue, such as when he has to rework a drawing for a client who complains that the subject's chin-line wasn't 'properly captured'.

At the heart of The Alienist is how Bruhl is as our investigator.  Bruhl's Dr. Kriezler is a bit opaque, a bit of a mystery to others save Moore, but even to the person who would qualify as his friend he still has a bit of distance.  Not that Bruhl does not manage to sneak in some good bits too.  "You made him a martyred saint in a Renaissance painting", the good doctor remarks on seeing Moore's illustrations.  Bruhl's Dr. is perhaps far more progressive than I would think possible in turn of the century America (I find it a stretch to think even the most advanced doctors would suggest to parents that a prepubescent boy's dressing as a girl is something they should just accept or even allow).

However, we get hints that Kriezler is not all there either.  In the first episode, he makes a long statement of how he has to put himself in the killer's mind, to almost 'be the killer'.  It's a chilling bit of acting so well-done by Bruhl, but it makes me question whether he'll end up being a bit bonkers too.

I would put that to the scripts, though again, not having read the Carr novel I cannot vouch for how close or far it strays from the original story.

However, in terms of performances I think The Alienist has rounded up a fine cast, and not just the leads.  Geraghty's Teddy Roosevelt is a flustered but honest man, one who dislikes outsiders investigating but also willing to allow it to save children from a gruesome fate.  The double-act of Smith and Shear as the Isaacson Brothers works well, though I figure Smith is the more romantic lead (he gets a surprisingly graphic sex scene) and Shear the more dutiful, mother-loving brother.

If there are issues with The Alienist, it is both in terms of subject and style.   I think people will be put off by child prostitution and the killing of children.  The Alienist, for better or worse, is a spiritual descendant of Sherlock Holmes, down to our characters.  It goes beyond the setting: what in the U.S. is the Gilded Age in Great Britain would be the late Victorian Era.

You have the Holmesian-like Kriezler (the highly intelligent yet not totally social figure), the Watson-like Moore (the not-as-bright figure who can be both the muscle and shocked by the goings-on), with Commissioner Roosevelt being a de facto Lestrade.

You even have Kriezler's Irregulars: Miss Howard and the Isaacson Brothers, and a Jack the Ripper-like crime wave, with touches of the macabre and the sexually charged.

It won't be everyone's cup of tea, but from the glimpses I had, The Alienist has strong atmosphere and strong performances that will make for good viewing of fans of the slightly off-kilter and period pieces.  I don't know if I will finish out the series only due to my discomfort with the idea of killing children and using them for sex.  That kind of thing disturbs me greatly.  However, I cannot fault The Alienist for being well-written and well-acted.

Going by that, it is worth a brief visit.