Call Me By Your Name: A Review 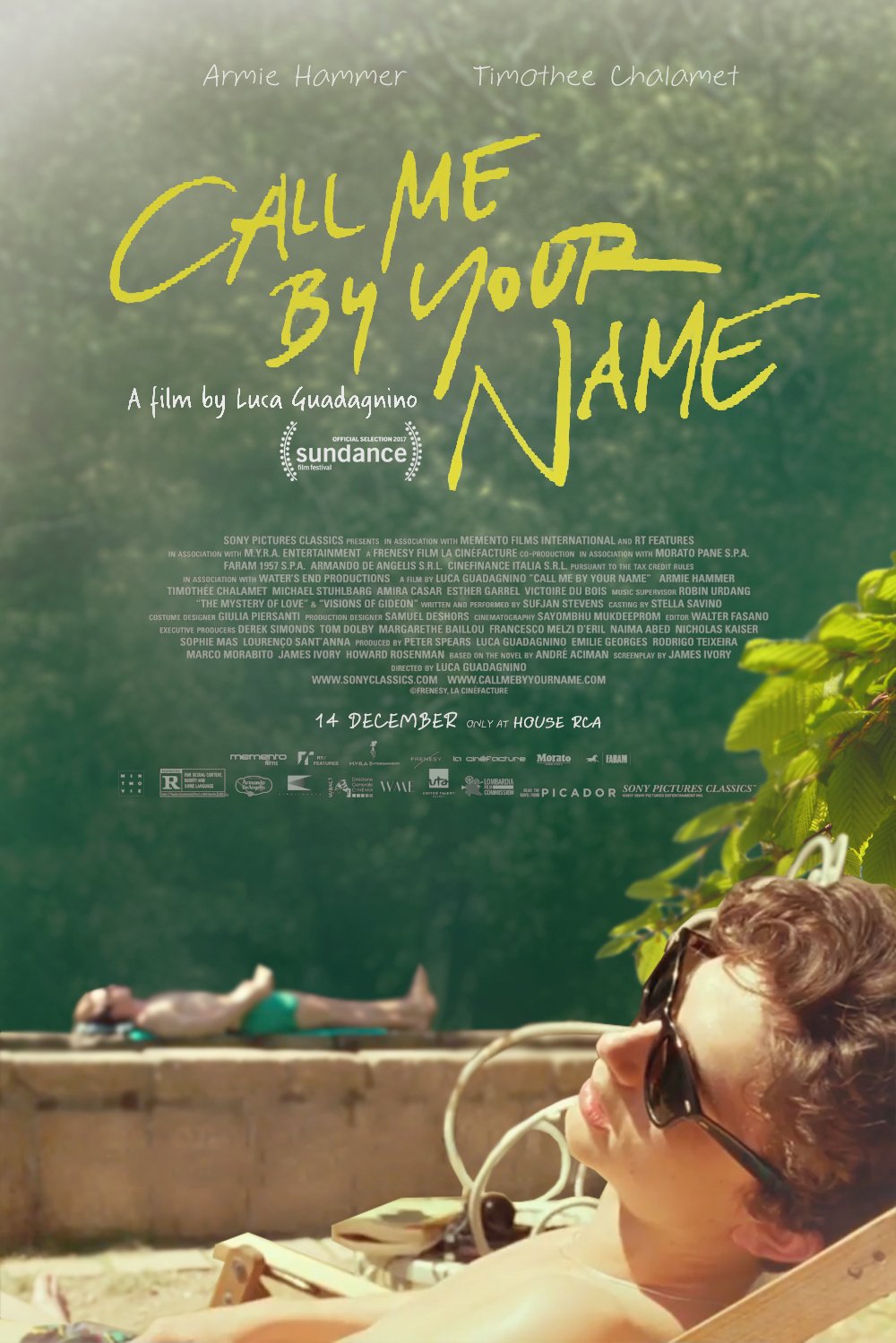 CALL ME BY YOUR NAME

Is it better to speak or to die?

I'm highly conflicted by Call Me By Your Name.  It is a beautiful meditation on the joy and thrill and pain of first love, of giving yourself body and soul to someone in an idyllic love that cannot last.  It is also about a twenty-four-year-old in a sexual relationship with a seventeen-year-old.  The genders of the participants is irrelevant: one or both could have been women and it would not remove the unease I felt about it all.

How to resolve this conflict?  Is it better to speak or to die?

Elio Perlman (Timothee Chalamet) is spending his usual summer in northern Italy with his archaeology professor father (Michael Stuhlbarg) and mother (Amira Casar).  It is the Summer of 1983, and every year Professor Perlman has a graduate student come to study, learn and assist him.  Elio has a girlfriend, but they have not indulged in the full pleasures of the flesh.

Enter Oliver (Armie Hammer), the new grad student.  Elio is displeased he has to give up his room to Oliver, and looks upon Oliver's more casual nature with a bit of envy.  He especially looks upon Oliver's Star of David pendant that he wears, while Elio has not worn his for years.  Oliver, for his part, does not look much on Elio, especially since he will be there for only six weeks.

At this juncture, I'd like to point out that if I go by Call Me By Your Name, graduate students spend their time swimming and lying about topless for days on end, going to town on bicycles as they ride around the bucolic Italian countryside and hitting the occasional bar or dance.

Oliver has a way with women, who find the tall Jewish American a nice drink of water.  Elio finally has sex with his girlfriend, but he still finds himself drawn to Oliver.  He slips Oliver's shorts over his head (Brokeback Villa?) and dreams of him.  Finally, one day in town, Elio makes his feelings know to Oliver in the most subtle yet knowing way, where nothing is spoken overtly but the intention is clear.

Oliver says they cannot speak of these things, but it does not stop them from frolicking and kissing, Elio the more aggressive one.  Oliver still will not pursue anything stronger, and he begins to give Elio the silent treatment.  Days pass, and Elio finally slips him a note asking that he not hate him.  Oliver slips a note back, telling him to grow up and meet him at midnight.

That day, Elio all but counts the hours until the magic hour, when he goes to Oliver and they make love.  It is after their tryst that Oliver whispers that sweet nothing to Elio, "Call me by your name, and I'll call you by mine".  Elio finds himself in the throes of his first true passionate love affair, down to where he has an auto-erotic encounter with a peach.  When Oliver attempts to taste this literal forbidden fruit, Elio first is angered, then overwhelmed with sorrow and pain.

Elio freezes out his girlfriend, who does not understand.  To show appreciation for his work, Professor and Mrs, Perlman send Oliver and Elio on holiday before Oliver leaves for America.  There, the two lovers spend time frolicking in the mountains, late-night walks in the empty village streets save for a couple playing Oliver's favorite song, Love My Ways by The Psychedelic Furs, and enjoying The Mystery of Love.

However, Oliver has to depart, and it is a farewell at the train station.  Elio calls his mother to pick him up, obviously devastated but saying nothing.  It is his father, with a deft and delicate yet knowing touch, who discusses Elio's love affair, of which he knows of, and gives his son a beautiful monologue about the joy and pain of being yourself.

Now, it is winter, and as the Perlmans are getting ready for Hanukkah, Oliver calls, telling them that he is engaged.  To give their son time to speak to Oliver alone, Elio murmurs 'Elio, Elio, Elio' to the other end of the phone, where we hear the respondent speak 'Oliver, Oliver, Oliver'.  As he stares into the chimney fire, Elio lets his tears flow out of him.

I would not blame people for thinking of Call Me By Your Name as artsy gay erotica.   I think few films have been as fixated on the male form as this one.  It almost seems as if Oliver and Elio do nothing but sit, stand, walk or lay about either shirtless or with open shirts.

I suppose we should be thankful this did not apply to Michael Stuhlbarg.

I figure I'm one of those pesky reviewers who gets hung up on details.  Just as I could not figure out why, even with the warmth of the Tuscan sun, our hot young men went around shirtless for apparently days on end, I genuinely wondered what Oliver actually did.  If he had six weeks for this sojourn, I would imagine he would be too busy working with the professor to flirt with seventeen-year-old boys (he admits as much on their last night, when Oliver tells Elio that the impromptu shoulder-rub he gave Elio was a way to essentially test the waters, and finding him a bit hostile, decided not to go further).

Instead, for all the study this graduate student did, there was only a handful of times when we saw him doing any actual work.  Instead, Oliver spent most of his days swimming, laying on the grass and by the pool, where we could marvel at his beautiful and firm, hirsute form.

Over and over I noted how despite being there for educational purposes, Oliver not only did relatively little in terms of education (unless it was to give a delighted Professor Perlman a true history of the word 'apricot') but more curious, did all this lounging and cavorting with the blessings of the good professor.  Would that any of my college professors had let me do such things, but I digress.

It's here that I express my great conflict with Call Me By Your Name.  Is it beautiful? Yes (and no, that is not a reference to Hammer or Chamalet or the Italian vista).  Chamalet's performance is excellent: his final scene, silent, where the emotions of having his heart break because his first and perhaps only real love hits you, and regardless of who was your first genuine love it is a universal moment.  Curiously, Chamalet's best moments are the silent ones: the multiple burden of losing his love and not able to tell his mother is real and heartbreaking. 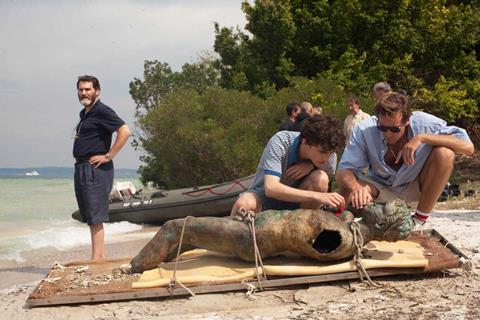 The subtlety of saying just enough without having to scream "I'M GAY" is a credit to James Ivory's screenplay adaptation of Andre Asiman's novel.  Ivory not only lets things play out softly, with just enough to know what is being said without saying things directly, but also allows the characters to be intelligent without being elitist.

It also allows Stuhlbarg to have a beautiful monologue, where Professor Perlman makes clear he knows his son had a passionate love affair with Oliver, that it was a beautiful friendship...maybe more than a friendship, and that the pain of love is worth experiencing.  Ivory, who has long worked in film and crafted elegant movies of elegant people who suppress their feelings with his late producing/life-partner Ismael Merchant, has written a screenplay that would fit within that Merchant-Ivory collection.

As a side note, I personally would have preferred Blue Monday over Love My Way, but the latter is probably more appropriate to the message.

I was not quite convinced by Hammer, but this might be the fact that Oliver had some misgivings about starting up a sexual relationship with a minor but went ahead with them anyway, down to starting but not completing oral sex on Elio.

Director Luca Guadagnino not only drew excellent performances from the cast, but also cinematically added touches the highlight the lushness of romance and those dreams of love we all have, how one romanticizes true heartache.

Finally, Sufjan Stevens' contributions in terms of songs, both Visions of Gideon which closes Call Me By Your Name and especially Mystery of Love, lifts the sequences to highlight that most beautiful and awful of human emotions: love, true love as opposed to mere physical pleasure.

Having said all that, it is still the story of an affair between an adult and a minor.  It is not quite statutory rape, but it is still highly unsettling to me.  Oliver is seven years older than Elio, and Elio, technically, is not an adult by the legal definition of one.  He may be at the age of consent, but we still have a 24-year-old having sex with a 17-year-old.  I would not feel comfortable if it were a 24-year-old man having sex with a 17-year-old girl or vice-versa or it both were women.

Granted, that is just a personal thing, something that might trouble just me.  However, I cannot just ignore that detail.

All together, it is still a beautiful, haunting experience, but one that I still struggle with.