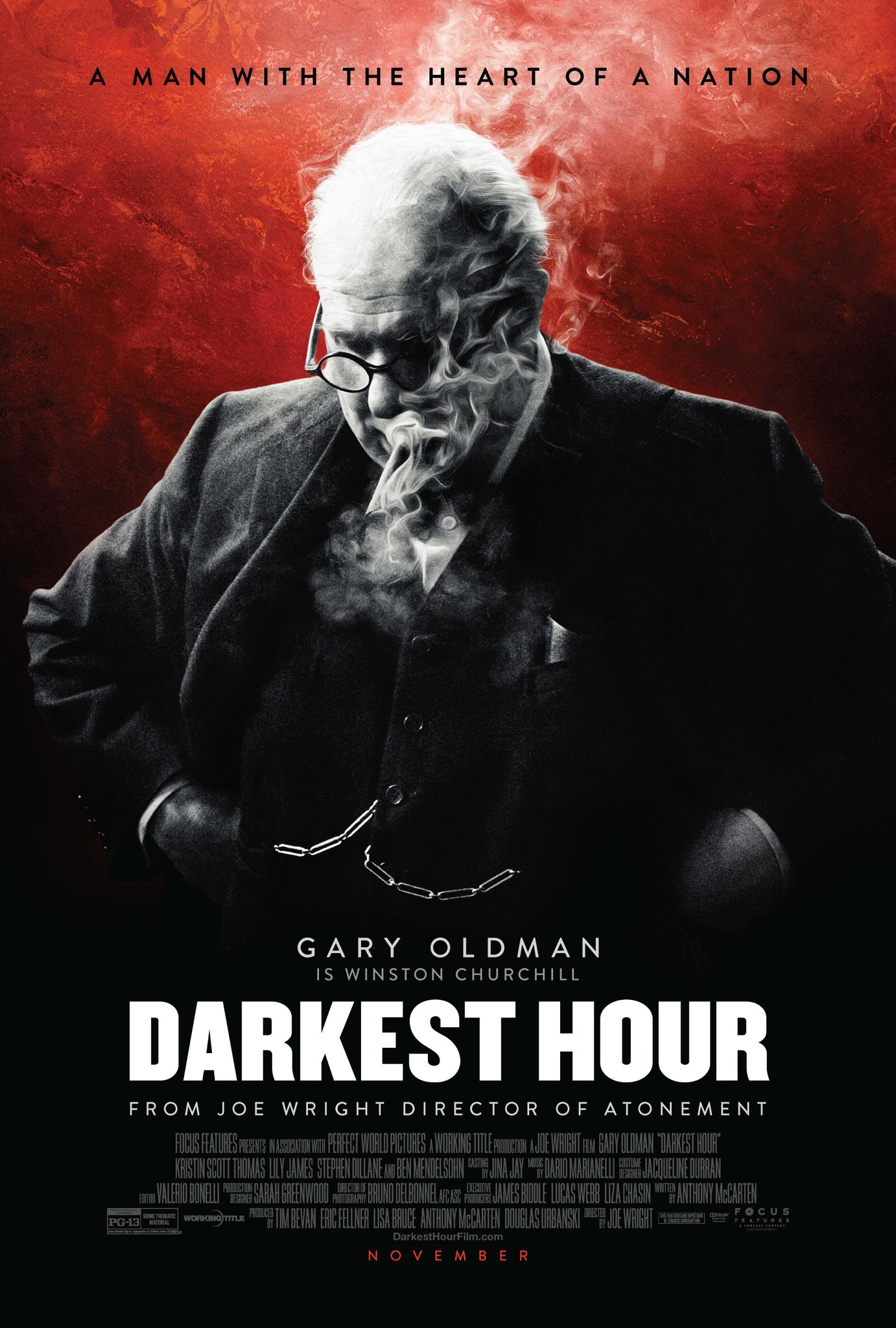 The critical days of Britain's entry into World War II are fodder for films. Darkest Hour, the film that covers the first month of Winston Churchill's first term as Prime Minister, can feel a bit draining, but with a bravura performance by Gary Oldman and solid work from others, it becomes part political intrigue, part meditation on compromise versus principle.

Neville Chamberlain (Ronald Pickup) has been forced out of office after Britain declared war against Nazi Germany.  Chamberlain, who is dying, and the other Conservative Party leaders, want Lord Halifax (Stephen Dillane) to become the new Prime Minister.  Even King George VI (Ben Mendelsohn) would prefer Halifax, a man who sees Britain's position as extremely weak and wants to pursue peace negotiations with Hitler.  However, the Opposition, whom Chamberlain wants to form a Coalition government with, will not accept Halifax.  They will accept only one person: Winston Churchill (Oldman).

Churchill was right when it came to the Nazi peril.  He's also tainted in Tory eyes for many reasons: he's seen as self-serving, unreliable, a disastrous military leader (Gallipoli still haunts him) and generally untrusted and disliked by his other elites.  King George VI has his own reasons to dislike Churchill: he was one of the few politicians who openly supported former King Edward VIII, now Duke of Windsor, in his wish to marry Mrs. Simpson.  However, it's Churchill or nothing, so His Majesty has to bend to political reality and call on Churchill to form a government.

Churchill for his part has his own doubts about both his abilities and Britain's, especially when his War Cabinet pushes for negotiations with the Germans.  Halifax and Chamberlain in particular push for a sued peace, convinced that Hitler will allow the British to live and fearing that plunging them into actual fighting will decimate their people.  Churchill in this is unmovable: there will be no negotiations, but he plays things cagey, for he knows saying that outright can force Halifax and Chamberlain to resign, which could lead to a vote of no confidence and the fall of his premiership.

In this critical month, Churchill finds himself under siege figuratively and literally, his goal of rescuing the British Army at Dunkirk a desperate mission.  Should the British fall at Dunkirk, it might probably spell the end of the British Empire.  Despite his wife Clementine (Kristin Scott Thomas) to offer support, sometimes at a high cost due to his temper and irascibility, and with his secretary Elizabeth Layton (Lily James) to put a human face on the war, Churchill still finds himself a lone man.

Halifax and Chamberlain eventually get Churchill to 'see the light' and he offers tentative suggestions that he is open to negotiations.  An unexpected source of support comes his way in the form of His Majesty.  King George VI expresses anger at the thought of fleeing to Canada, and secretly calls on his Prime Minister telling Churchill that he has his full support.  He also encourages Churchill to keep fighting, but to tell the British people the truth about their situation.

On his way to Parliament to address potential terms for negotiations, Churchill slips out of his car and does what he has done only once in his life: ride the Underground (what Americans call the Subway).  He startles the other passengers, and in a brief stoppage he asks the British people their thoughts on the matter.  They are all of one mind: no retreat, no surrender, no negotiations, no matter what the cost.

With this to buck him up, he addresses a small group of Members of Parliament and lays his case.  Riling up the other MPs, he goes to Parliament and declares that there shall be no surrender.  The dying Chamberlain signals to his supporters to stand with Churchill, and Halifax ruefully acknowledges that Churchill has used the power of the English language to rally the nation. 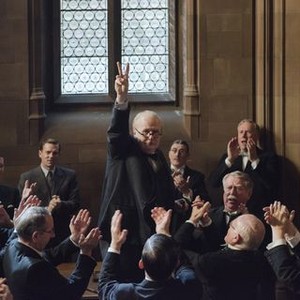 Darkest Hour hangs on one major element: Gary Oldman.  An actor's actor, he dives into the role of Churchill with his usual total commitment.  Oldman commands the screen both when he is the Churchill we all know and love: tough, unyielding, a master of oratory.  He also holds our interest when we see Churchill in a more private life: worried, fearful, short-tempered, even amused.  In one scene, Layton and another secretary start laughing when the see a photo of the Prime Minister angrily flashing a "V for Victory" sign.

Churchill asks what is so funny, and it's up to Layton to explain that the way he did it: index and middle finger with forehand facing forward, means 'up your bum', which is considered obscene.  If he holds his fingers with his palm facing forward, it has the meaning he intended.  Churchill, upon finding he inadvertently made a rude gesture, bursts out laughing himself, delighted that he told people to go 'up your bum'.

Oldman shows his range as Churchill when he is on the phone to an unseen President Franklin D. Roosevelt, his near desperation to get any old battleship or planes to Britain quiet, sad, solitary.  Oldman pulls back, not going into fits or rages or crying jags, but more a quiet desperation and terror and a hint of frustration, repeating an odd suggestion from FDR that Churchill could get the planes over to Canada by using horses to drag them across the border.

Churchill has been played by many exceptional actors: Albert Finney, Timothy Spall, Michael Gambon, Brian Cox, John Lithgow.  His distinct voice, cadence and mannerisms are easy picks for mimicry or parody, for if anyone understood the power of performance, it was Sir Winston.  Oldman however, never slips into farce or impersonation as Churchill.  In fact, I think the trailers for Darkest Hour might leave an impression that Oldman goes over the top.  It's actually a pretty strong and convincing performance, looking, sounding, and speaking so well as Churchill.

Oldman so towers over Darkest Hour that I think people forget the strength of others in the film.  Her role is small, but Kristin Scott Thomas holds her own as the loving yet strong Clemmie, the only person Winnie ever fears losing.  She is supportive but also unafraid, equally able to draw him out of his black moods of depression while reprimanding him for snapping at Layton on her first day.  Pickup as the dying Chamberlain and Dillane as Lord Halifax made a great team: they were not villainous and one could almost see their logic, even if it would mean that should Halifax had been Prime Minister, we could have ended up writing this in German rather than English.

It's a pity though that James' role is a bit limited in Anthony McCarten's script, and that Mendelsohn as His Majesty has only about three or four scenes.

Perhaps the Underground scene is a bit hokey, but one rolls with it because it was meant to tell us that Churchill was following the will of the British people and not sell out because the political class thought it knew best.  That scene is meant to rally us to his side, and it works.

Dario Marianelli's score is strong, setting the scenes well: when Churchill meets with His Majesty, it is slightly comic while still keeping with the dignity of the occasion.  Joe Wright put all these elements together so well that despite its two-hour length the film rarely if ever drags or feels padded.  In fact, the constant 'countdown' gives it an urgency, the days slipping by quickly as Britain teeters on the edge of collapse.

Darkest Hour moves both time-wise and emotionally.  Visually cinematic and unapologetically so, it adds to the Churchill legend while giving us signs of the man behind the myth.  Gary Oldman gives another standout performance and worth the price of admission alone.  Aided by strong work by Scott Thomas, it is a film that perhaps won't be the final word on Winston Churchill, but is, perhaps to misquote Sir Winston, a Fine Hour.