I'm too young to remember the term 'honky' but do remember the term 'poor white trash', which I think is still used today.  Three Billboards Outside Ebbing, Missouri is a slice of life about them po' white trash, a place where crimes go both unsolved and apparently rampant without repercussions.  Moments of actual possibilities sink into almost a spoof of serious crime dramas, and while I've been told that Three Billboards is a 'dark comedy', I don't think I laughed none.

Seven months after the rape and murder of her daughter Angela remains unsolved, Mildred Hayes (Frances McDormand) decides to put up three billboards outside Ebbing, Missouri.  "Raped While Dying", "And Still No Arrests", "How Come, Chief Willoughby?" read the signs.  Despite the signs being on an out-of-the-way road where only those who get lost will read them, the three signs irritate both Chief Willoughby (Woody Harrelson) and his loyal deputy, Jason Dixon (Sam Rockwell).

The Ebbing Police Department makes the Sparta Police Department from In the Heat of the Night look downright progressive by comparison.  It's an open secret that Dixon assaults black residents, and he is also a drunk who insults people and has all the earmarks of an unsympathetic ass.  Not even living with his Momma has made him anywhere remotely human.  Chief Willoughby for his part has enough on his plate, particularly the fact that he's dying from pancreatic cancer (which I'm not entire sure he can pronounce: either 'pancreatic' or 'cancer').

Despite Willoughby's insistence that there is little to no physical evidence on which to make any kind of investigation into Angela's death, let alone an arrest, Mildred won't back down.  The whole town apparently is opposed to her signs, down to where the local dentist tries to harm her when she's there for a checkup.  Mildred also has to deal with her angry son Robbie (Lucas Hedges), displeased with the billboards and all the attention they bring.  She also has to endure the taunts of her ex-husband Charlie (John Hawkes) and his 19-year-old girlfriend Penelope (Samara Weaving). 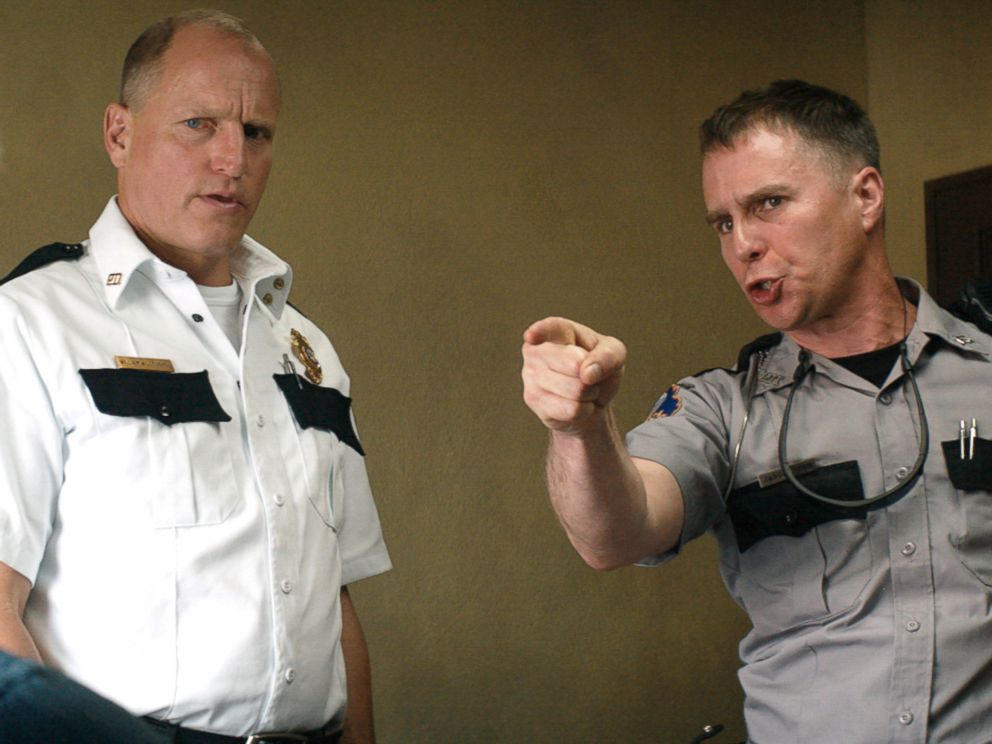 Willoughby spends a day with his wife Anne (Abbie Cornish) and their two daughters, then kills himself.  This leaves a massive impact on the community and on all those connected with those three billboards: Mildred discovers that Willoughby made a month's payments on them as a way to taunt her, Dixon assaults Red Welby (Caleb Landry Jones), the man who rented out the billboards, in broad daylight, culminating in Dixon tossing Red out of Red's second-floor window.  The literal new sheriff in town, Abercrombie (Clarke Peters) fires Dixon, but despite literally seeing Dixon throw a man out a window and assault him, and even having Dixon all but brag about it, does not actually arrest him.

Shortly after, the three billboards are set ablaze.  As a topper, Mildred throws Molotov cocktails at the Ebbing Police Headquarters, unaware that Dixon is inside, reading a letter from Willoughby telling him he needs to learn to love and not hate to be a good detective.  He suffers major burns, but saves the Angela Hayes file.  Eventually, Dixon overhears a conversation that might be connected to the Hayes murder, Mildred endures a bad date with James (Peter Dinklage), who served as her alibi for the fire, as well as some words of wisdom from Charlie and his bit of fluff, and while the evidence Dixon gets does not point to Angela's actual killer, he and Mildred decide the guy Dixon overheard did commit some kind of crime, so they decide to go to that man's home in Idaho to kill him.  They might not be convinced it's the right thing to do, but they'll decide along the way.

For me, I think my intense disappointment with Three Billboards comes from the fact that it was sold as a serious meditation on crime, revenge and finding peace only to end up with a 'dark comedy'.  I think a 'dark comedy' would be something like a Fargo, but Three Billboards seemed to come from another world altogether, one where we're supposed to laugh at these characters rather than have any genuine sympathy for what is meant to be a serious and tragic situation.

All right, let's say that was the purpose: to laugh at their pain.  I can't do that, at least not in the way writer/director Martin McDonagh presents them.  Starting from when he presents the Hispanic characters (who of course have no names and can't speak English) to how the Anglo characters speak, I think he went overboard in trying to show us how uneducated they were.  The dialogue is filled with 'ain'ts' and 'thems', and to my ear it sounded both unrealistic and almost cartoonish.

Robbie complains to his mother that 'Some of the guys was giving me crap'.  There are other turns of phrases that seemed a bit much in attempting to make everyone in Ebbing a group of unhinged hicks; there was when Willoughby mentioned the struggle between Mildred and Dixon as 'between the two of youse'.  There was when Mildred congratulated herself on the activity going up 'ever since I put them billboards up'.  Someone else commented on how 'Charlie don't know about (the billboards)'.

Maybe it's just me, but even the least educated person I come in contact with knows when to use 'don't' and when to use 'doesn't', the plural and singular not being a mystery.

A bigger problem is that despite McDonagh's insistence, Three Billboards never makes the case as to why the town was on Mildred's side when it came to solving the crime but on Willoughby's side when it came to the billboards.  We hear a lot about that, and even when dentists attack (I guess that's where the 'comedy' comes in).  I'm genuinely surprised that even in a hick town like Ebbing, where judging by the police department the IQ of the town is in the negatives and they run the town like a more inept ISIS, someone could literally punch two people (including a woman) and throw someone out the window and nothing happens to them.

For all the attention Three Billboards is getting, I don't see anything in the performances that is particularly great.  Let me walk that back a touch.  The three leads were good if they meant the roles to be seen as cartoonish and overdone.  Rockwell is at the top of that list, his Dixon so crazed and clueless it's a wonder that he didn't drag his knuckles on the ground when he walked.  Harrelson was better as Willoughby, who had some intelligence to him, and McDormand's angry mother showed flashes of greatness when she remembers her final conversation (or rather argument) with Angela.

It's a pity it didn't do much for Hawkes, who has wonderful range, or Hedges, who plays yet another 'angry grieving young man' as he did in his breakout role in Manchester By the Sea.

There were moments when Three Billboards, if it had taken a more straightforward approach, one that made the characters less caricatures, could have been genuinely moving.  The aforementioned scene between Mildred and Charlie, or another after Dixon comes back from a bar-fight where he got DNA evidence and is visibly injured.  He manages to get into the bathroom, pushing past his alarmed mother.  Despite the low nature of Momma Dixon, she still bangs on the bathroom door, pleading for her son to come out, calling out to him that he's still her little boy, the anguish in her voice real.

I think those moments when the characters appeared human rather than idiotic (Penelope imparting wisdom from a book she read, though she cannot remember whether it was about polio or 'the one with the horses', meaning polo) were the ones that moved me emotionally.

Most of the time though, I though Three Billboards Outside Ebbing, Missouri played as farce.  This is a town where a police detective openly assaults people, nearly killing them and where Mildred assaults teenagers and no one ever charges them with anything.  The former is known to beat up on African-Americans (defending himself bizarrely by saying he is 'persons-of-color torturing' versus 'n****r torturing'), the latter everyone knows bombed the police department.

What does someone have to do to literally be arrested in Ebbing, Missouri?

Seriously, who drives around with a fire extinguisher conveniently in their car?

I know a lot of people think highly of Three Billboards Outside Ebbing, Missouri, but I thought almost all of it played like a joke.  It might be a black comedy, but I found it all black and no comedy.