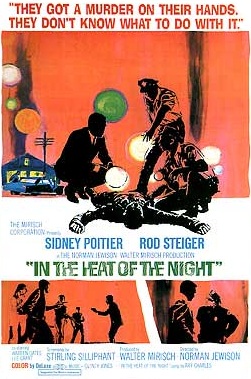 In the Heat of the Night is a curiosity in cinema in that when the film was adapted to television for a successful series, the characters were the same but rather than the racist and antagonistic battle between Chief Gillespie and Detective Virgil Tibbs, they actually got on rather well.  I loved the television series, but I knew very little of the film apart from the famous "They CALL ME MR. TIBBS!" line.

Now, at long last I have seen In the Heat of the Night.  On the whole, it is a good film, though I found it less about the murder investigation than about how the Old South didn't take kindly to strange Negroes* thinking they were the equal of whites.

Virgil Tibbs (Sidney Poitier) is arrested on suspicion of murder of Mr. Colbert, a wealthy Northern industrialist about to build a major factory in Sparta, Mississippi.  The local Sheriff Gillespie (Rod Steiger) thinks Virgil might have done it because it is impossible for a Negro to be carrying a large amount of money.  As it happens, Virgil is a police detective himself in Philadelphia.  "Mississippi?" an incredulous Gillespie asks.  "Pennsylvania," Virgil angrily corrects him.

Virgil wants to leave immediately, but two things prevent him.  The first is his commanding officer in Pennsylvania, who asks him to help the investigation.  The second, unbeknown to him, is the Widow Colbert (Lee Grant), who sees that Tibbs is a competent detective who will actually solve the case.  She issues an ultimatum: she will not build the factory if the Negro officer is pulled off the case.  That being said, Gillespie is ordered to work with Tibbs.

There are quite a few suspects in the murder investigation, and whenever Gillespie arrests one, Tibbs is there to tell him he's wrong.  Tibbs suspects out-and-out racist Mr. Endicott (Larry Gates), the man who has the most to gain from having the factory closed.  Endicott takes umbrage at a Negro suggesting he is a murdered, and promptly slaps Detective Tibbs.

To the shock of all, Virgil Tibbs slaps back!

The case takes a few twists and turns, with thugs going after Tibbs for getting airs above his station, but Gillespie, who is growing in a grudging respect for Tibbs (which is actually reciprocated by Tibbs) comes to his aid.  Eventually, they start working together to come to the resolution to this mystery, one that involves backroom abortions, naked white girls, and more bigots.

The mystery solved, Virgil Tibbs leaves Sparta.  Gillespie takes him to the station and as Tibbs boards, Gillespie calls out to him,  "Virgil, you take care now, y'hear?"  Tibbs smiles, quietly saying, "I hear".

As an actual mystery, I felt In the Heat of the Night was a bit of a letdown.  The actual killer looked so obvious in his overdone craziness that it was a wonder the entire Sparta Sheriff's Department didn't peg him earlier.  It also makes one wonder how Sheriff Gillespie came to be Sheriff in the first place.  He was so totally inept, arresting people left right and center with varying degrees of logic.  Part of me wonders whether we could have had Gillespie still be the racist he was, but one who at least was competent in his job.  It would have given us a real 'meeting of equals' rather than the dumb hick and the brighter black man.

As a side note, the television series at least made both Gillespie and Tibbs intelligent, though again times had changed and the idea of a bigot being the lead would not have worked.

However, in other respects In the Heat of the Night is a strong film.  While Steiger got the Oscar, I think Poitier gave the better performance.  His Tibbs is a man quietly seething at the indignities he endures save for one great moment, the famous "Slap" when Tibbs smacks the bigoted Endicott.  This is one of the most famous moments in In the Heat of the Night, a black man literally striking back at violence done to him and his dignity.

This is a crucial scene, because we see that Gillespie, for once, cannot bring himself to do what is expected of him.  Endicott asks him what he's going to do about it, and Gillespie replies that he doesn't know.  We see the slow evolution of this character, subtle but effective.

The growing relationship between Gillespie and Tibbs is given one scene late in the film, when both are at Gillespie's house.  Gillespie drops his defensive stance slightly to reveal a slightly wounded man, facing age and loneliness.  Tibbs reaches out, but Gillespie becomes defensive again.  Still, we see that they have reached a rapport, if not always an easy one, but an understanding as to the strengths of the other.

Director Norman Jewison kept things flowing smoothly, the pacing never flagging through the film.  He got a great performance out of Poitier, and Steiger maybe was a bit over-the-top but bigoted sheriffs aren't known for subtlety so I'm not going to belabor the point.

If anything, what I found again slightly disappointing was the actual mystery in In the Heat of the Night.  The resolution came if not quickly at least unsurprising, as if we needed a killer and this obvious weirdo would fit in just nicely.  Apart from that In the Heat of the Night is a good film, less about the crime and more about the world it took place in, one where the times were a'changing, whether people liked it or not.

*As this is 1967, I've elected to use the prevailing terms of the times.  The term 'Negro' or 'Negroes' is no longer considered acceptable to describe someone now termed "African-American" or 'black'.  However, since these were the terms used, I've elected to use them here.  Another term used in the film to describe African-Americans I will not use under any circumstances.