Maybe there is something thoroughly wrong with me, as an individual, that I don't perceive and others do.  Maybe I unconsciously carry some powerful vibe that makes almost all my efforts doomed to failure.

I thought this regarding this year's coverage of the Plaza Classic Film Festival here in my hometown of El Paso.

It seems that every time I try to be assertive, try to take positive steps forward, they end up blowing up in my face.  Maybe I'm just doing it wrong, over and over again, and like constantly falling off a bicycle, can't seem to get the hang of it.

There was the time when I was assertive in seeking a job at El Dorado High School.  I called, I faxed, I went to the office, all to plead my case.  What ended up happening was that the assistant principal called my house (I was living at home at the time) and he yelled at my mother, shouting and berating her to tell me to leave them alone.  So shocked was she, so upset, that this normally uber-assertive woman got off the phone right away, highly upset at this fiasco.

El Dorado High School...where a coach was arrested for transporting pot, another fired for encouraging hazing on his team, and a teacher was recorded being verbally abusive to the point of using vulgarities at students, and yet I was the one considered too much of a nuisance and unstable to work there.

Then there was the time that I went to substitute at the San Jacinto Adult Education Center in The EP.  There was a mix-up and I got called for a job that had apparently been cancelled.  This had happened before at another school, and I was sent to the library to fill the time.  The front office was terrified that I showed up, and didn't know what to do.  The director was at another class.  I offered to work at the library, but they didn't know what to do.  Finally, I asked if maybe I could talk to the director.  At this, the front staff became genuinely terrified to the point of hysterics.  "WHAT?!" they stuttered.  "YOU WANT TO TALK TO HER?!"  There was total fear in their voices and faces.  Eventually the director did come, and after some calls, stormed up to me, wagging her finger, and said they'd pay me for the day but that I was to go.  She then told me, "And I think it was very rude of you to ask to speak to me!"

She was yelling and quite hysterical.  Growing in her fury, she ended by screaming, and I do mean SCREAMING, at me, "GET OUT!  GET OUT!  GET OUT OF MY CAMPUS OR I'LL HAVE SECURITY ESCORT YOU OUT!"

And that was just because I had asked to speak to her.  Imagine if I had demanded it.

I was so mad I rushed from the San Jacinto Center and straight to the El Paso Independent School District Central Office and filed an official complaint.  Curiously, the date was Halloween.  Less than a month later, I got the call from the City of El Paso to work for them at the Public Library, and decided that with this good job, I saw no need to pursue the matter.

I relate these stories because I got the same sense of deja vu when dealing with the Plaza Classic Film Festival 2015.  For two years, the PCFF had been extremely cooperative in helping me cover the festival.  I would send my list of movies I would cover to the El Paso Community Foundation President Eric Pearson  and he would be kind enough to have tickets waiting for me.

Following the exact same procedure, I sent my list to the e-mail I had sent them before.  The fact that I got no reply or verification didn't concern me, as I had not gotten one the previous years.  As it so happened, I was in the Downtown area to exchange tickets for the EP Baseball games and while there, stopped at the Plaza box office to see if I had any tickets waiting there.  At the box office, they found nothing under my name, then suggested I stop by the EPCF office less than a block away and see if they had them there.

I go, and to be frank, it is extremely hot in The EP.  I'm walking in a long-sleeve shirt at 100+ degree temperatures, with a cap and tennis shoes.  I go up to the office and ask about the tickets.

The front office staff (at this point, I think front office staffs are one of my mortal enemies, because they have an inbred hostility towards me) looked at me like I was some homeless, unhinged figure who just wandered in suffering from hallucinations caused by heatstroke.  They had no idea what I was talking about.  Even after I presented my Online Film Critics Society card, the secretary looked at me with a most curious eye, as if I were making all this up, the OFCS was an imaginary group, and I was flat-out nuts.

At one point she asked, "Are you asking for free tickets?" with a somewhat condescending tone.  I didn't like this question because it made it look like I was asking for something just to ask.  The idea that I might actually be a real film reviewer covering the festival in my professional capacity didn't cross her mind.  In fact, the EPCF front office had if not an overt hostility at least a cool indifference towards someone not part of the El Paso Times.

I do wonder whether, apart from The Times, if the PCFF gets major press coverage (and The Times is again, the local paper).

I know that it wasn't a hostility towards me, because as I said, the PCFF had been highly cooperative before.  Mr. Eric Pearson, a most pleasant figure, had always been there at the ready to help.  I figure this is a failure to communicate, to coin a phrase.  However, I simply could not think of what else to do.  I took the secretary's advise and sent another e-mail, but nothing doing...the first day I could go the box office had nothing for me.  In fairness, they did tell me that maybe one of the ushers had something for an "Aragon", but every usher had no idea what I was talking about.

As a side note, one of the security figures was a bit bitchy.  She looked at me and snapped, "Can I help you?"  I asked if she was an usher.  Sneeringly, she said, "NO!  I'm Security".  Gee...didn't know Bloodsucking Bastards was in such danger of a raid.

I went back at least twice to ask if anything was there the other times I went, but after the third time I threw my hands up in despair and said, 'that's it'.  I had planned to cover the following films:

Bloodsucking Bastards
Shorts 1 (collection of short films)
Enter the Dragon
Dark Victory
Do You Dream in Color?
Star Trek II: The Wrath of Khan
The King and I
The Deer Hunter
Stop Making Sense
Horse Feathers
My Little Chickadee
Grey Gardens
The Stranger

However, after a lot of thought, I opted for just two (Wrath of Khan and The Deer Hunter, the latter completing my Best Picture Oscar Winners list) at $16.  If I'd gone to everything and paid out of my own pocket, it would have been $66 (Shorts 1 and Stop Making Sense being free).  That isn't counting somewhere between $7 to $10 for parking, plus the 25+ mile drive from work or home to Downtown.

I wasn't about to spend $66 minimum to cover a film festival in my professional capacity.  There is no justification for such things.

Here is the odd thing, at least to me.  At just about every other film festival (Sundance, the TCM Classic Film Festival, South by Southwest, the San Diego Comic Con, even the LDS Film Festival devoted to Mormon films), I could submit my request for a press pass and have it granted.  In fact, I get e-mails asking me to come and cover these events (school, work, and expense mostly preventing me from doing so).  The Plaza Classic Film Festival, on the other hand, has no Press Coordinator to which to contact, as far as I know.  I figure they think the El Paso Times coverage is enough, but for the life of me I don't understand why they seem to think that the PCFF is just for locals.

I know the reason I am left out in the cold is because frankly no one knows who I am or what I do.  A prophet in his hometown type situation I figure.  I don't know what I can do to get the PCFF or local film figures to know that I am here to help them.  I welcome suggestions.

As such, there is apart from a review of The Deer Hunter (which I would have reviewed in any case as part of my Best Picture retrospective), there will be no coverage for the 2015 Plaza Classic Film Festival.  I am most disappointed. 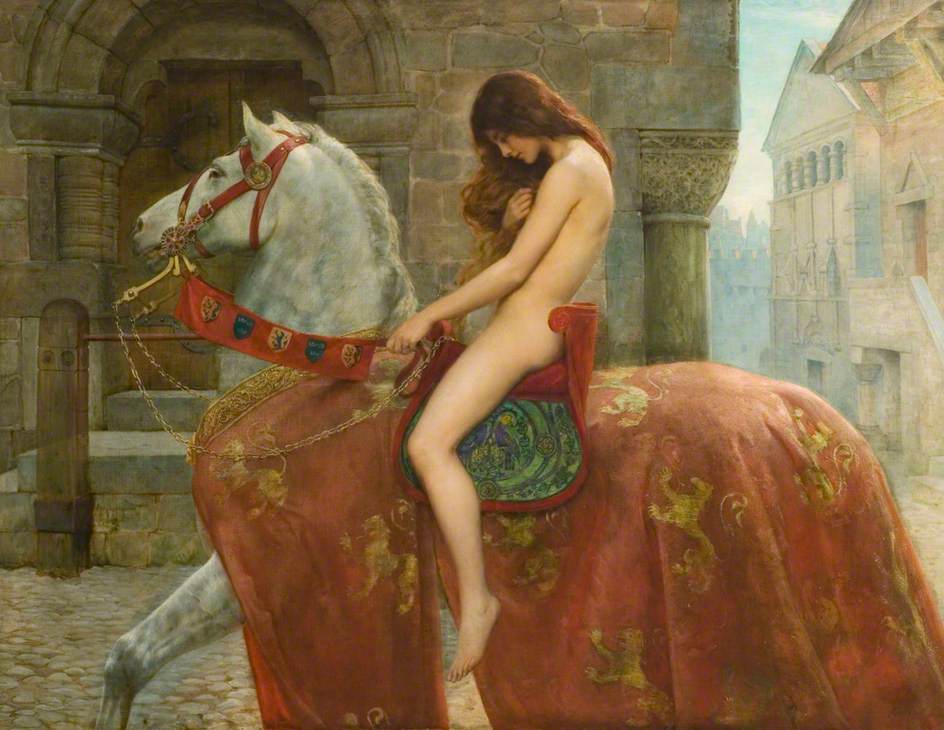 I had thought that maybe for next year's Plaza Classic Film Festival, I could rent a horse, get a long blonde wig, and ride Lady Godiva-style into the theater lobby, waving a gigantic OFCS banner in front of El Paso's elite.

Knowing my luck though, they'd probably just ignore me then too and it would just blow up in my face.  Somehow, I get the sense that if anyone at the PCFF should stumble upon this, they'd dismiss me as a nutter (Master's Degree in Library Science and five years professional film reviewing experience be damned).

Again, it is not open hostility but a lack of knowledge that created this problem.  A Press Coordinator could have prevented all this.  With all due respect, there is more press in El Paso than The El Paso Times.

What's a certified film critic to do?
Posted by Rick at 1:30 PM