Marlene Dietrich: Her Own Song. A Review


MARLENE DIETRICH: HER OWN SONG

Author's Note: This review is in conjunction with the 2015 TCM Summer Under the Stars Blogathon taking place at the Journeys in Classic Film site.  Today we celebrate Marlene Dietrich, a German actress who was brought to America as a rival to another SUTS featured actress: Greta Garbo.  Dietrich may not have had a catchphrase like Garbo's "I want to be alone", but she was more than able to hold her own against anyone.  I've selected Marlene Dietrich: Her Own Song, a documentary about Dietrich made after her death.  Thanks to Kristen at Journeys in Classic Film for allowing me to participate.

Marlene Dietrich was a star.  You know this by the fact that her name was enough to draw the public's attention.  It didn't matter whether you used her first or last name.  If you talked about "Marlene", others knew who you were referring to.  If you said, "Dietrich", the same applied.  She was risqué, she was beautiful, she was a legend.  Marlene Dietrich: Her Own Song, a documentary about Dietrich, makes the case that she was also something more.  She was a genuine heroine.

Her Own Song touches on her early life: her upbringing as a Prussian military man's daughter and how she and her sister Elisabeth were a bit sheltered from the chaos of post-World War I Germany.  Dietrich was a fascinating combination of strict Prussian disciple and Weimar Germany decadence: a woman with a strong work ethic and a disinterest in other people's opinion.  She started making waves in German cinema and theater, though she wasn't particularly popular or well-regarded.  She then meets Joseph von Sternberg, who saw in her the potential for a star, which the German film company UFA didn't.  Casting her as Lola-Lola, temptress in The Blue Angel, Dietrich becomes a star.  Her ability to speak English allowed her to play both the German and English versions, and a chance to make American films.

Her Own Song spends most of its time though on Dietrich's activities before and during World War II.  She looked upon the growing rise of Nazism with anger and disgust.  However, the Nazis were desperate to have her return to The Fatherland, whom they dreamed of making the jewel of Nazi cinema.  Her American career had tapered off, and both Hitler and Goebbels made lavish offers to make films for the Reich.  There was both financial and emotional pressure for her to return.

Others might have been tempted, especially since Elisabeth and Dietrich's beloved mother Josephine wouldn't leave Germany.  Despite being the embodiment of the ideal of a Nazi woman (a tall, blonde, blue-eyed woman), they failed to understand she was Prussian at heart.  As such, she wouldn't deal with these thugs.

The emotional conflict between her love for her homeland and her hatred for what it had become culminated in her becoming an American citizen.  Denounced at home, her private anguish grew when she thought that the war bonds she sold were being used against her own people.  She threw herself into the war effort, entertaining troops and using her influence to get as close to the front as possible.  She faced enemy fire and even endured having cold rats run across her.  Dietrich even came close to capture, when she and her troupe found itself caught in the Battle of the Bulge.

At war's end, she was one of the first civilians allowed to enter occupied Germany, and thanks to her friends in high places, was able to get in contact with her mother (though for security reasons, both had to speak in English rather than German).  The end of the war, however, ended a lot for Dietrich.  Her career took more dives, and she found her work in two post-war films, A Foreign Affair and Judgment at Nuremberg, extremely difficult.  She agreed to be in the first (where she played a Nazi mistress) only because of director Billy Wilder (whom she respected and would do just about anything for) and got through her scenes in the second, where she essentially represents all Germany (and its insistence they knew nothing of the Holocaust) thanks to Spencer Tracy's encouragement, saying that if Dietrich said it, people would believe it.

For Dietrich, the war was reality, not the 'movie star' world, which she considered prostitution (doing work for the money).  She had continued success after the war with her one-woman shows, but at 75 she withdrew from public view, never to be seen again.  She held herself in isolation until her death 16 years later. 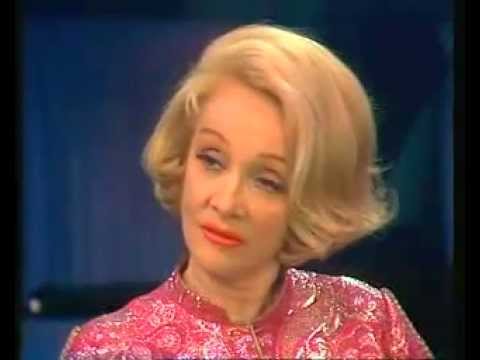 As the bulk of Her Own Song deals with her involvement in World War II (both prior to it and during it, along with how the war affected her for the rest of her life), we get a far different image from "Dietrich" as this legend.  Instead, the audience comes away with a great deal of respect and admiration for her personal courage as well as for the tragedy of a woman who was German at heart, but who found that the world she knew had been destroyed.

Dietrich was forever Dietrich in how she interacted with the world, not caring for other people's opinions.  She didn't care that the Nazis called her a traitor: she was going to perform for her adopted nation.  Similarly, when told she could not sing German songs when she went to Tel Aviv, she wouldn't hear of it either.  She told the promoter she wouldn't sing one German song...she'd sing nine.  Before she did though, she asked the audience if she could sing a song in German (perhaps a rare time when she did take other's views into account).  However, I think that in the back of her mind, the audience, which included many German Jews who had either fled their country or were Holocaust survivors, would know of her work during the war and would see her intentions were good.  The audience roared their approval, and many were in tears when she would sing not just traditional German songs or her hits like Lili Marleen, but also German versions of Where Have All the Flowers Gone?, which she used as a powerful anti-war anthem.

A good theme for Her Own Song came from Dietrich herself (courtesy of Jamie Lee Curtis' narration, with Nina Franoszek speaking the words of Dietrich).  In a diary as a child, Dietrich wrote that she was 'at times nostalgic, at times matter-of-fact'.  In a way, Dietrich remained that way for her life: sometimes overwhelmed with nostalgia for her Prussian past, for the love of her 'boys', and for her image (the latter causing her to withdraw from even friends and family, refusing anyone to see her as she was in the last years of her life, so they could preserve the memory of 'Dietrich' as Lola-Lola rather than the old woman she was).

According to Her Own Song, the war was the most powerful thing that impacted the whole of Dietrich's life.  It caused her to leave Germany, physically and emotionally.  It caused her separation from her lover, French actor Jean Gabin, both physically and after the war ended, emotionally.  For her, reality was the war.  Everything else was not, and Dietrich's career and life were forever shaped by those years between the rise and fall of Adolph Hitler.

One especially powerful moment in the film was when Dietrich finally gets in touch with her mother, whom she has not heard from in six years at least.  As we see images of a ruined Berlin, the genuine anxiety mixed with joy at the mother-and-child reunion is heartbreaking.  Josephine calls Marlene "my dear heart", and the sound of this glamorous, sophisticated chanteuse saying "Mommy" brings the goddess down to Earth.

The idea that Marlene Dietrich was motherly may come as a surprise to many who know her only as the glamorous diva, but Dietrich was extremely affectionate and protective of many.  She became a mother-figure to the exiled German/Jewish community in Hollywood, cooking and cleaning for them and speaking to them in German and French, creating a little Old World refuge to those thrown out of their own.  The public and private Dietrichs were so at odds, and Her Own Song allows us a brief glimpse into it.

As Her Own Song is almost exclusively about Dietrich and the war, everything else, especially anything negative or perhaps scandalous is left out.  We don't hear about Dietrich's bisexuality and only passing references to her infidelity to her husband, Rudi Sieber (and that he too had a lover).  We also don't hear about Dietrich's ego.  An amusing story Judy Garland told was about how she and Noel Coward were once invited to Dietrich's home.  "Would you like to hear my album?" she asked them.  Eager to hear it, they agreed.  Garland reported with gales of laughter that the album consisted of nothing but applause, with Dietrich helpfully pointing out where each ovation took place.  "This was Berlin," she said as the audience erupted in joy.  When the applause grew louder and more fanatical, Dietrich said, "This was Munich".  Garland added, "But there not ONE NOTE of music!  It was all applause".  Coward whispered to Garland, "I hope there isn't another side," only to discover that there was.

Granted, Garland was known for her tall tales, but it does give a glimpse that Dietrich had at the very least, a healthy ego.

We also don't know how she lived out her final years in seclusion, a version of Norma Desmond save for the fact that Dietrich was quite sane and not one to live in the past.

Marlene Dietrich: Her Own Song is a strong and fascinating portrait of a brave woman who stood by her convictions even though it cost her the world she knew and loved.  Less about her general career than about how the horrors of Nazism and war affected her once gaily decadent life, Her Own Song makes an excellent primer to the life and career of this extraordinary figure.

Email ThisBlogThis!Share to TwitterShare to FacebookShare to Pinterest
Labels: 2001, Blogathon, Documentaries, Review, Summer Under the Stars