The Fountainhead: A Review (Review #740)

Author's Note: This review is in conjunction with the 2015 TCM Summer Under the Stars Blogathon taking place at the Journeys in Classic Film site.  Today we celebrate Patricia Neal, an actress who has the distinction of winning an Academy Award on her first nomination (ultimate receiving a total of two Best Actress nominations).  As a side note, The Fountainhead features two other Summer Under the Stars actors: Gary Cooper and Raymond Massey.

While best known for that Oscar-winning role in Hud or as the female lead in the original The Day the Earth Stood Still, I've selected The Fountainhead, the film version of Ayn Rand's exploration via literature of her philosophy of Objectivism.

The Fountainhead was an important film in Neal's professional and personal life.  In the former, this was her breakout role (having replaced Lauren Bacall and selected over Barbara Stanwyck), and in the latter as she at 23 began an affair with her 48-year-old costar Gary Cooper. The affair damaged her career, the abortion she had which resulted from the affair haunted her for the rest of her life, and it was decades before Cooper's daughter Maria Cooper Janis, who spat at Neal when Janis was a child, was able to make peace with Neal.  Thanks to Kristen at Journeys in Classic Film for allowing me to participate.

The Fountainhead, I think, will be judged not just on the merits of what's on the screen.  Those who love Ayn Rand's philosophy will love it, and those who detest her will hate it.  I confess to finding some of her ideas interesting, though being Christian I reject her atheism. I found that The Fountainhead has a great idea for a plot and some beautiful visuals.  It also has at least two strikes against it: some lousy directing and some heavy-handed writing, which threaten to derail the film.

Howard Roark (Gary Cooper) is a brilliant architect who will not compromise his vision no matter what the cost.  If it means languishing in obscurity, so be it.  If it means turning down major commissions because the client wants to make the smallest change, so be it.  Roark will not change his vision to fit the times.  As such, he eventually ends up in a quarry rather than alter his architectural visions.  The machinations of New York Banner publisher Gail Wynand (Raymond Massey) and his architectural critic  Ellsworth Toohey (Robert Douglas) keep Roark's anti-traditional designs from gaining traction. 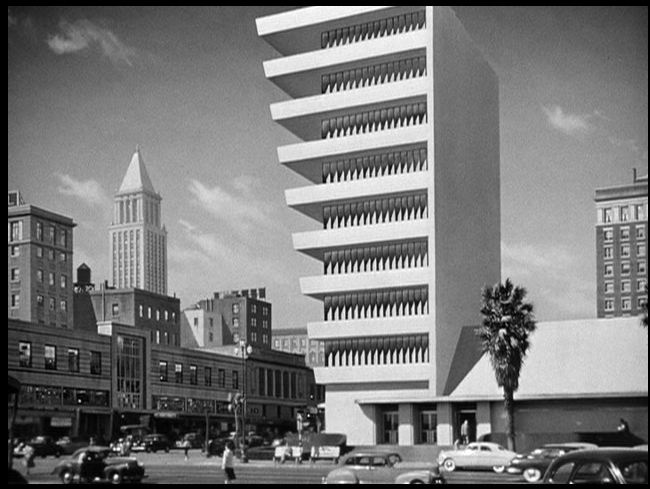 Enter Dominique Francon (Patricia Neal).  Daughter of a noted architect and fiancée to second-rate architect Peter Keating (Kent Smith), she discovers Roark at the quarry and an instant attraction ensues.  Roark, however, cannot be tamed, which both infuriates and thrills Dominique.  Eventually, Roark rejects her for her own good, and she marries Wynand, who was in love with her.  Things turn around for Roark, however, when he finds a champion in Roger Enright (Ray Collins), a billionaire who shares Roark's contempt for popular opinion and gives his a major commission.

From this Roark finds himself gaining more commissions, having earned a cult following.  Toohey, enraged, continues to work against him, while Dominique, who finds she is still attracted to Roark, finds herself in the odd situation of having her husband similarly enthralled with Roark, though Wynand's attraction is mental.  Keating turns to Roark for help on a massive housing project.  Roark agrees to let Keating essentially be a front, allowing him to take all the credit on condition that the design not be altered.  Keating presents the design, and as Roark feared the group asks for 'minor' alterations.  Keating does his best to  keep his word but eventually has to give in.  Roark is displeased by this news, and decides to take matters into his own hands.  With Dominique's help, he blows the project up, then waits for the police to take him in.

Toohey leads a crusade against Roark, insisting that "self-sacrifice is the law of the age" and that man lives to serve others, not himself.  Wynand uses his influence to try get people to Roark's side, but the pressure is too much and when Keating confesses that Roark was the architect, Wynand is forced to join in the anti-Roark brigade.  Roark doesn't hold it against him, and at his trail, he gives a monologue and then rests.  Roark is found not guilty, Wynand commits suicide, and we end with Dominique at the construction site of the Wynand Building, the new Mrs. Roark going up, looking up adoringly at Howard Roark, who triumphantly stands above the world, towering over a world that tried to tame him.

The Fountainhead if anything is a visual triumph.  Certain moments are so visually arresting that King Vidor should be congratulated for getting Robert Burks to create the cinematography.  Such scenes as when Dominique first sees Roark, with that quarry drill as the most daring phallic symbol this side of the Hays Code and Dominique standing out among the rocks, is quite beautiful.  I also found the architectural designs to be quite fascinating and would love to see the buildings actually created.  Some are Frank Lloyd Wright-like, others more Modern, closer to Le Corbusier.  That's a bit odd in that they were rivals who never saw eye-to-eye (and for the record, I am firmly Wright and fiercely anti-Corbusier).

However, I admit to dropping off quite a few times in The Fountainhead, and that I think is because in so many other ways, Vidor and Rand made a mess of it.  With Vidor, it has to be his directing of the actors.  He allowed some of his actors, like Roark's mentor Henry Cameron (Henry Hull) to be so over-the-top I felt embarrassed for him.  Also suffering is Neal, who is asked to constantly stare out into nothing, striking poses but never being able to be human.  At some points, her lustful gazing gets a bit almost tawdry.

Given that Patricia Neal had come to Hollywood as a Tony winner, it can't be because she couldn't act.  I think Neal did the best she could, but not only did Vidor fail her but Rand did too.  She has a brilliant idea rattling in The Fountainhead, of a man who will not compromise and pander to popular tastes.  Unfortunately, her dialogue is built around people making a lot of speeches that don't sound like actual dialogue.  Rand's dialogue sounds like dialogue, and I think everyone did what they could but even the best actors could only do so much.

She also fails to give people any dimensions.  Her villains are all bad (I expected Toohey to twirl his mustache) and openly bad, while her noble hero is heroic.  If Rand hadn't been so heavy-handed with the characters she might have had the drama she sought.  She lost focus on the film and focused on the philosophy, trying to fit the latter into the former and failing to understand that if she'd done the reverse, she could have had a more successful film.

In fairness though, I think Cooper did create a stoic but strong main character (even if he probably was at least a decade too old to realistically be Howard Roark).

The Fountainhead I think calls to be remade.  It wouldn't have Rand's heavy-handedness with her own material at least.  The film we have now has some bad performances (though in fairness no actor could handle such a script without struggling) but it also has some beautiful imagery, some fantastic sets and designs, and a good story rattling in there.  It I hope is not the final word on Ayn Rand's book.