The great tragedy of On the Waterfront is that it cannot be divorced from the actions of its director, Elia Kazan, during the Red Scare of the 1950s.  This story of a man's redemption through his decision to speak out is seen by many as a mea culpa for Kazan, the screenwriter Budd Schulburg, and perhaps one of the film's stars, Lee J. Cobb for their decision to name names of others they knew who were at one point members of the Communist Party.  I cannot answer for certain whether On the Waterfront is indeed a defense of their individual decisions and actions during the Red Scare and the Hollywood Blacklist of the 1950s.  I can say that while the parallel is extremely tempting, perhaps even true, there is a major difference between the two.

No one in Hollywood was bumped off as a result of their past affiliations. Careers and reputations were ruined, there were fatal heart attacks and suicides brought on by the stress and pressure of the investigations.  However, no one was actually murdered by the House Un-American Activities Committee.  That can't be said of the mob bosses in On the Waterfront, who almost delighted in killing their opponents.  In a certain way, the mob bosses played like Stalinists, killing all those who spoke out.  One wonders if instead of union hoods, the images were of a dictatorship, would the main character's actions be seen as an apology for 'naming names'?  Maybe, maybe not, I can't say for certain one way or the other.

Therefore, does On the Waterfront present a defense of what many even now still see as indefensible?  I suppose that depends on who is doing the talking.

While a whole article could be written about what On the Waterfront could mean, could be interpreted as, this is not what we're here for.  We are here to review the film on its own merits divorced from whatever politics one wants to put into it.  On that and on that alone, On the Waterfront really is one of the greatest American films made: a story about the cost of loyalty, betrayal, courage, and in the midst of this, a love story.

Terry Malloy (Marlon Brando), a former boxer, is the brother of Charlie "The Gent" (Rod Steiger), who is the right-hand man to mob/union boss Johnny Friendly (Lee J. Cobb).  Terry unwittingly helps kill a dockworker named Joey Doyle, who was set to testify against the union with the Waterfront Crime Commission.  Joey's sister Edie (Eva Marie Saint), visiting from a convent school upstate, demands to know who killed her brother.  Also drawn into the murder is Father Barry (Karl Malden), a Catholic priest who sees how corrupt and debasing the docks have become under Friendly's reign of terror.

Terry, who has a passion for pigeons, finds himself drawn to Edie, a feeling that is reciprocated.  However, Friendly and Charlie, determined to keep their criminal activities hidden and control of the docks total, won't tolerate any dissent.  Another dockworker who has decided to testify against Friendly at the urging and with the support of Father Barry, also meets a gruesome end.  An enraged Father Barry now shames the dockworkers, telling them in an impassioned impromptu sermon that Christ is with them and that they must stand up to tyranny.

Terry now is facing a great conflict: testify about what he knows (putting his life at risk and going against his own brother) or keeping D & D (deaf and dumb).  Edie, who is devastated by Terry's involvement in her brother's death but still falling in love with him, along with Father Terry, urge him to testify.  This grows when Friendly puts the squeeze on Charlie to get Terry to either go along with the program or kill Terry himself.  Charlie does his best, but Terry tells him how Charlie failed to look out for him when Charlie, under Friendly's orders, had Terry take a dive.

Charlie lets Terry go, but it costs him his life and almost that of Terry and Edie.  Terry, deciding to testify against Michael J. Skelly (Johnny Friendly's real name) and the other mob/union bosses, finds himself a pariah in his community for ratting.  A former young admirer even goes so far as to kill all of Terry's pigeons in retaliation: a pigeon for a (stool) pigeon.  Terry, however, won't back down and confronts an enraged Johnny Friendly.  As they fight it out, Friendly has to resort to getting his thugs to pummel Terry, while all the dockworkers stand by and watch.  The other dockworkers, finally fed up with Johnny Friendly and his crooks, tell a badly beaten Terry they'll go into the docks if he goes in.  Forcing himself up, Terry stumbles to the docks, with Johnny being pushed off the bridge and into the East River by Pop Doyle (John Hamilton).  Johnny has lost control of the waterfront, and Terry, beaten, bruised, but unbowed, leads the men to work.

Let's take a look at On the Waterfront without the prism of whether those involved meant it as a defense on what Kazan, Cobb, Schulberg, or anyone else did during the McCarthy era in cooperating with HUAC.  If we look at it, we see that this is two stories in one: a story about doing the right thing even when it will not benefit him in any way, and a love story about how a woman brings a man a moral awakening and his own worth.

We see this in the evolution of Terry, who starts out believing that in this world, you do it to others before they do it to you (a variation of the Golden Rule) and ends up standing alone against the unofficial code of the community that demands silence in exchange for a chance to make a living.   On the Waterfront, in the character of Terry, is someone who sees that the quick and easy is neither, that keeping a willful blind eye and deaf ears eats away at the very soul of someone. 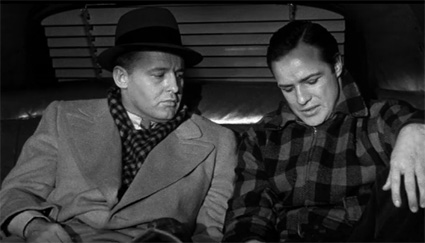 On the Waterfront has such fantastic performances that each actor/actress appears to be less giving a performance than actually being the role.  This is Marlon Brando at his earliest best, before fame and disinterest eroded his powers.  His Terry is a simple man who wants to be left alone and who just wants to get by, but who also mourns the loss of a chance to move up.  I think people who've never seen the film know Brando's "I could have been a contender" monologue, where Terry tells his brother that in exchange for a few lousy bucks Terry could have gone on to great things.  The genuine hurt and sense of betrayal breaks your heart.  Throughout On the Waterfront Brando is simply perfect in the role.  There's the disinterest he has about everything, the breaking down of his protective shell when it comes to Edie (one of the first good things to come his way), the struggle to do what his conscience is telling him to.  Terry is not a man to think but to act, and here, he's called to hold back, to break the code, and his eventual decision to risk everything to do what he sees as the right is an extraordinary journey.

Elia Kazan directed everyone so well in terms of their performances but also in terms of the subtext.  My favorite moment (apart from Terry's "Contender" scene) is when Johnny Friendly orders Charlie to take care of his own brother.  We see that Charlie is literally under Johnny's heel with Friendly's feet propped on the table and Charlie at the other side of them.  Kazan, without making a big show of it, shows that Charlie is at Johnny's feet.  Kazan used everything: the actors, the text, the subtext, to further the story, and it's a marvel to see.

Matching Brando is terms of acting is Steiger as his brother Charlie, who at first isn't troubled by his actions with the union but who in his own way tries to look after his kid brother.  When he sees what he has taken away from Terry, he (and we) know that it will not end well for Charlie, but we also see that Charlie has his own conscience to answer to, and that in his way, Charlie achieved a sense of nobility.  Cobb is also brilliant as the tyrannical Friendly (a name more than tinged with irony): the determined, bullying manner to him in his desire to control men, and Malden as the voice of Christian morality in this dog-eat-dog world.

As a side note, Malden's Father Barry made me think the film was prescient if you substitute Father Barry for a Cardinal Wojtyla (later known as Pope John Paul II) and the mob/union bosses as the Polish Communist leaders.

Saint, making her debut, could not have made a better film to start her career.  Her Edie is the heart of the film, a young woman who finds courage of her own but who is also conflicted: her loyalty to her brother versus her growing love for the real Terry.

One thing that elevates On the Waterfront is Leonard Bernstein's score.  It enhances all the scenes, from the opening brutality of the seedy world of the tenements to the romance between Terry and Edie.

If there were any fault in On the Waterfront, you could argue that Terry in real life wouldn't be stumbling towards the docks.  He'd be sleeping with the fishes.  However, while that would have been true to life, I think we need to have a happy (or happy-ish) ending, a note of hope that speaking truth to power despite the dangers and keeping to a moral code is better than serving an evil system will win out in the end.

Again, we go back to whether On the Waterfront ties into the morality of giving friendly evidence against others.  Some will always see Elia Kazan as evil: the opportunist who sold out innocents and lived a life of success and luxury while the innocents lived in squalor, in exile, or even killed themselves.  Others will see Kazan as a brilliant filmmaker and may not see the film as an apology or defense of his actions.  I leave it to each viewer to make their own mind on the subject.

What I do know is this: On the Waterfront, as a film, is astonishing: brilliant in its acting, complex in its morality, true to its gritty urban setting, and among the greatest American films.