A Ghoul Time Was Had By All...

I don't gravitate to horror films but respect those that do what they set out to do: make audiences jump in fright.  If that is the standard by which a film should be measured, Insidious is on the whole a well-made, even logical film that gives the audience what they want.

The Lambert family has just moved into a new house.  Here, dad Josh (Patrick Wilson) and mom Renai (Rose Byrne) have their three children.  The one at the center of Insidious is the oldest, Dalton (Ty Simpkins).  One day, while up in the attic, he falls.  He appears all right but shortly after slips into an unexplained coma.

It's three months later, and we still see Dalton is out.  Strange things are afoot at the Lambert home: their other son Foster (Andrew Astor) wants to move rooms because he is scared when Dalton walks around, Renai hears strange voices coming from her baby monitor while she tries to work on her music, strange claw-marks drenched in blood are on Dalton's bedspread.  Josh isn't taking much of what he hears seriously, until Renai actually sees something come at her that she demands they move homes.  They do, but Dalton doesn't improve and worse, whatever haunting there was in the old house are now at the new house.

Enter Mama Lorraine Lambert (Barbara Hershey), who believes Renai's stories because she has had a dream confirming her vision, as if a big demon-like creature standing behind Josh didn't confirm things for the women.   Mama Lambert brings in Elise (Lin Shaye), a psychic of sorts, along with her comedic sidekicks Specs and Tucker (Leigh Whannell and Angus Sampson respectively); a side note: I think Whannell looks a lot like Rob Bell, who curiously fits my idea of something demonic, but I digress.  Elise is familiar with Josh, because she's helped him before.

We learn Dalton is not really in a coma, but that his spirit has left his body and is lost in The Further, a netherworld occupied by all sorts of haunts.  These haunts, ranging apparently from the merely mischievous to the downright demonic, are aware that Dalton's body is free from his soul.  Therefore, they want to get inside and take possession.  In order to rescue Dalton, Josh has to get him from The Further, because he too traveled out of his body when he was a child, stopping only when Elise intervened once a ghost who looks like Miss Havisham came too close to him( even more startling when one discovers The Old Woman is played by a man: Philip Friedman).  Now it's a race to get Dalton and escape the onslaught of ghouls coming after the Lambert home.

Insidious tries at times too hard to give audiences those 'jump out of their seats moments'.  These are provided courtesy of Joseph Bishara's score (who also played the Demon).  There were a lot of violins in Insidious' score, and one felt Bishara was trying to set the mood for the film it was laid on a touch too thick. (Side note: I though the score had inspiration from Béla Bartók's The Miraculous Mandarin, but that is speculation on my part).  Somehow, I can forgive this because most everything else in Insidious is effective in its efforts to scare.

Patrick Wilson was excellent as Josh, a harried father who is the only one who doesn't really believe anything supernatural is going on.  He is a regular guy, concerned about his son, who after making the "shocking" discovery that he had a hand, however unwitting, in his son's plight has to go and rescue him.  Hershey's role is small (like in Black Swan) but after that film and Insidious, it is puzzling why she isn't more in demand.  She is, granted, a bit too calm in the beginning, especially if she suspects her son's connection to Dalton's tragedy, but again I would put that on the script rather than her. 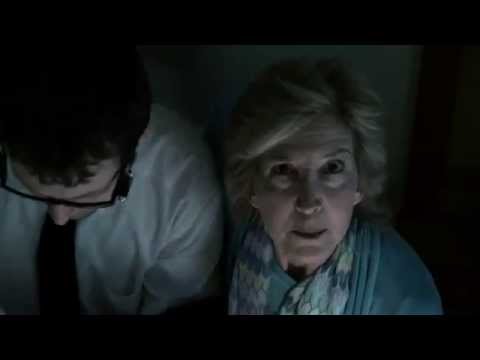 The highlights are the actual 'cleaning crew'.  Shaye's Elise is calm and serious throughout the whole process, knowing the menace that has haunted the Lambert family but also aware that Dalton can be rescued.  Whannell (who wrote the screenplay) and Ferguson add the needed comic relief as the slightly bumbling assistants who appear to be Ghost Hunter rejects, with their matching white shirts and black ties and generally sincere but somewhat goofy behavior.  I would argue that only Byrne stumbles slightly as Renai, given too many moments where she attempts to look frightened but never quite convincing us just by putting her hand to her mouth.

Whannell's screenplay and James Wan's directing is effective in bringing out the scare factor in Insidious.  Never has Tiny Tim's Tiptoe Through the Tulips been so oddly freaky, downright terrifying.  You had the monsters jumping out at you at all the right times, which judging from the audience's reaction brought about the desired effect.  However, perhaps it is just the way my mind works, but without giving too much away, I figured that Josh was at the center of the demonic activity when they got to the new house.  That being the case, I was wondering when they everyone else was going to figure that out.

I also note that as much as I tried, I couldn't get away from thinking that Insidious bore a stricking resemblance to Poltergiest: the haunted child, the home under siege, the woman who can make contact: I was half-expecting Elise to say, "This house is clean".  Specs and Tucker filming their efforts does not help in the matter.  Two girl-like ghouls that pop out in a hallway bathed in red was, sadly, reminiscent of The Shining, some of the demons/ghosts look like they wandered in from the Thriller video, and when Josh goes into The Further, the lantern he was carrying made him look like the Old Gravedigger from The Haunted Mansion ride.

As a last note, when Elise puts on the gas mask to communicate with Dalton, the effect was oddly humorous: the audience started laughing.

One thing that Insidious got wrong was the conclusion.  I don't know whether or not it was a way to set up a sequel (and regular readers will know how I feel about endings that leave such possibilities open), but it does make one wonder at times, again, how characters can be so dumb.  Once we think Josh and Dalton are back among the living, we wonder why Elise didn't wonder if there was a possibility that not everything went according to plan.  This 'shocking' final twist was to my mind, unnecessary, and brought the film down slightly.

One also didn't know exactly why Miss Havisham was after Josh in the first place, and having him shout at her in an attempt to rid himself of this specter was a bit odd.

Still, in the end I can't fault a film for doing what it set out to do: give me some good old frights with ghosts and demons and all sorts of creatures that go bump in the night.  Insidious at times is a bit heavy-handed and over-the-top in its efforts to have me jump out of my seat (something I've done only once), and the concluding chase around The Further didn't quite live up to all the terror that it was building to.  On the whole, it was effective in the frights given how the audience reacted to it, and not a bad way to scare people.

I just don't scare in movies as stated, with only one exception.  If I judge it by the goals it was trying for, Insidious is better than most recent films in the genre, not great but at least with a better sense of suspense than gore.

Incidentally (and yes, slightly off-topic), if and when I am asked to describe what my idea of what the Devil looks like is, I say I imagine he would look something like this: