There appears to my mind a whisper, or perhaps shouting, campaign to make Sucker Punch the Last Airbender of 2011, a simply horrible film, perhaps the worse of the year; a remarkable achievement given we've only entered April. I can think of at least one film which is even worse, but this by no means should be understood to absolve Sucker Punch from its sins.


When I went into the theater, I was already a bit wary. After all, Sucker Punch was co-written and directed by Zack Snyder, whose 300 and Watchmen I found rather horrible. Therefore, why imagine Sucker Punch would be a giant leap forward? Now that the film is out for us to see, I do feel a certain vindication in my views of Snyder: all gloss no story. This of course is a departure in that unlike the other two films, he is not adapting a graphic novel. However, Sucker Punch might as well be one, because it plays like one, but more on that later.


Baby Doll (Emily Browning) has lost her mother and is in the clutches of her evil stepfather, who wants her and her sister out of the way. Baby Doll attempts to defend herself and her sister from his wicked advances, but in the mayhem her sister is killed and she is sent to a mental hospital, where the evil Chief Orderly Blue Jones (Oscar Isaac) is bribed into getting Baby Doll lobotomized in five days. I should note that everything up to Baby Doll's incarceration has no dialogue but is accompanied by music, a cover of Sweet Dreams if memory serves correct, and that music dominates the film, but again, more on that later.


Now Baby Doll has five days to escape, and it's at this point that whatever plot Snyder and co-writer Steve Shibuya becomes rather murky. The hospital is apparently a front for some kind of burlesque/brothel, with Dr. Vera Gorski (Carla Gugino) serving as psychiatrist/mistress of ceremonies/madam/dance teacher

Side note: all I could think of was Debbie Allen in Fame when I saw Gugino at the dance studio, but I digress. Here, Baby Doll meets other girls: sisters Sweet Pea (Abbie Cornish) and Rocket (Jena Malone), Blondie (Vanessa Hutchens), and Amber (Jamie Chung). The girls must all dance, and somehow their dance releases their inhibitions. In any case, Baby Doll's Danse Erotique is so incredible, so spectacular, that it sends any man into fits of frenzy. It also allows her to escape into another world entirely, I figure one of her own creation, where a Wise Man (Scott Glenn channeling David Carradine in Kung-Fu) sets her on a quest to acquire five things in order for her to be free.

Baby Doll gets the other girls to help her on her quest, and while Baby Doll does her number, Baby Doll and the girls, aided by the Wise Man, battle all sorts of robots and dragons to get the five items and be free.


Alas, not everything goes according to plan, and the High Roller (John Hamm) has arrived; before we know it, Baby Doll meets her fate, but not before freedom is obtained for at least one of our girls.

Somewhere along the line, Sucker Punch became lost in its own internal logic to where sorting it out into some sort of coherent story becomes a harder task than getting a map, fire, a key, a knife, and an Object X. How can the girls easily enter the fantasy world of Baby Doll without so much as batting an eye or for that matter, requiring them to dance as well? At the Wise Man's final appearance, are we to believe that he exists in the real world, which would then beg the question how did he enter Baby Doll's fantasy world to begin with?

We have to figure that Baby Doll's fantasy world is perfectly visible to the other girls who also enter, or if these fantasies are all in Baby Doll's head the girls are oblivious to them while they do the actual dirty work of getting all the materials while Baby Doll provides what, exactly? It isn't a striptease since her fantasies end with her fully clothed. It isn't a lap dance since we never see her near any of the men, and given what some of them look like, that is a wise decision. We never see the actual dance, and while it isn't required it does seem a quick and convenient way of slipping into the fantasy world, or is it fantasy within fantasy?


If Sucker Punch is being sold as some sort of female empowerment picture, then I would consider getting the FCC involved under false advertising. Far from being about strong women, Sucker Punch takes an almost perverse delight in demeaning women, who are required to run around in skimpy outfits and whose only real power comes from gratifying whatever sexual urges the men have: everyone from Blue Jones to the High Roller to the Mayor who looked like what one gets when you cross a street pimp with Truman Capote or Larry "Bud" Melman from Late Night with David Letterman. Even Dr. Gorski, who in theory should have been the head of the mental hospital, is browbeaten and beaten in any way you can imagine by little boy Blue.

Women are not triumphant here, they are objectified.


I figure this is perfect for the World of Snyder, who judging from the screenplay doesn't have much if any interest in characters. Rather, we see that his first and last interest in what he can do visually. Judging from Sucker Punch, his burning ambition is to make video games crossed with music videos. The film is really made for teenage boys and those who think like them, where the screen overwhelms you with grand visuals of battle scenes that would dazzle guys far too into their XBoxes or Playstations or whatever they have nowadays.

In fact, when we first enter Baby Doll's fantasy world, Sucker Punch was shameless in its 'homage' to Mortal Kombat that one cannot be blamed for expecting "FIGHT" to appear on the screen. The whole film really plays out like one long video game: each battle is really the next level.


Then again, we go into the music video aspect of Sucker Punch. Each battle is punctuated by a cover version of a song: Jefferson Airplane's White Rabbit in one, The Beatle's Tomorrow Never Knows in another, to where one would want to get the soundtrack but not care for the film. Even more bizarrely, the film ends with a curious closing song, Love Is The Drug.

The song itself isn't the bizarre part. It's how it was shown: with Blue and Gorski doing a duet while the girls do some dance routines a la Peep Show w/Holly Madison, but given how Snyder put the sequence together where we can only see glimpses of the dances while the credits roll on, one wonders why tease us with it (unless the whole point of Sucker Punch is merely to tease). 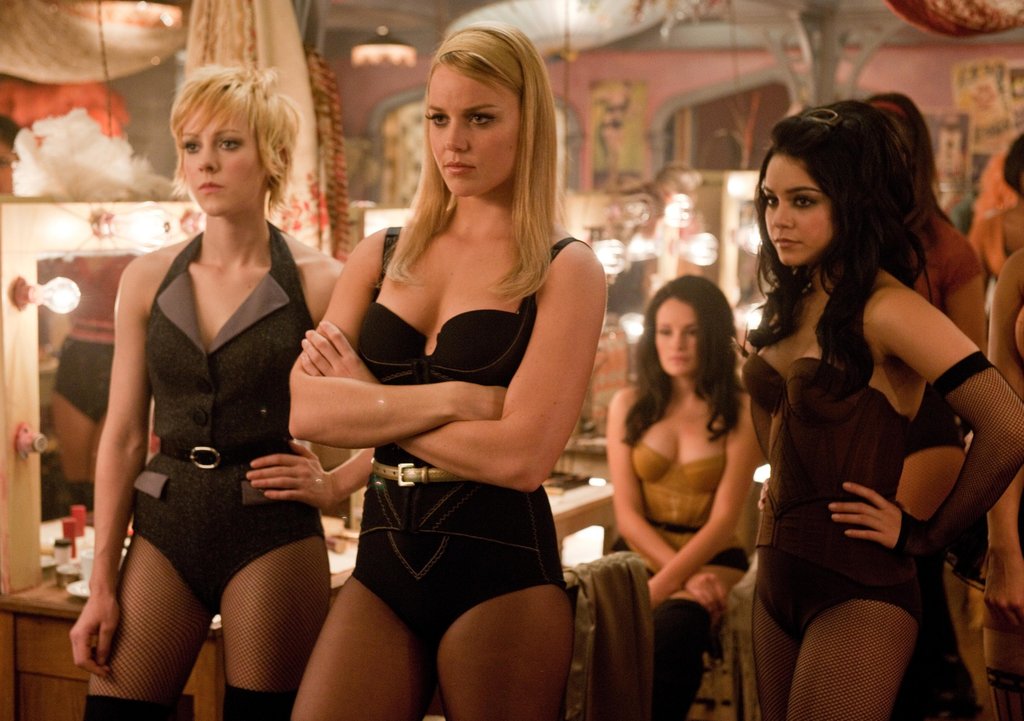 There is no point discussing the actual performances because there weren't any. Browning appeared lobotomized even before she started, with a dazed look when in the real/semi-real world and even on occasion, in her fantasy world. It's not a good sign when the main character just stares and doesn't speak until approximately 20 minutes into the film.

Gugino appeared to be channeling Angelina Jolie's accent from Alexander, which makes her scenes come across as a Dracula spoof. Hamm has nothing to work for because as both the High Roller and the lobotomist he doesn't do anything or have any real part to play in Sucker Punch. Isaac overcompensates by being wildly over-the-top but I figure his character has to be, or at least I hope his character has to be hammy.

Cornish has no expression beyond concerned, but at least she has more expressions that Chung, Hudgens or Malone, who appear to be having the time of their lives making audition tapes for the Pussycat Dolls, strutting in corsets in slow motion and shooting guns in super-speed.

Unfortunately, the film it reminded me of when I left was Myra Breckinridge. Can't wait to see what Zack Snyder does with the new Superman film...