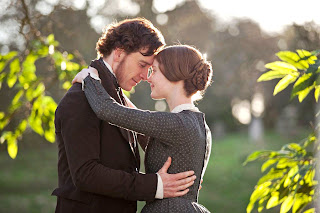 Has any heroine suffered as much as Jane Eyre?  An abused orphan who falls in love with a brooding, mysterious, moody man with a shocking secret, who seems to always be fleeing some sort of torment, one wonders if Charlotte Bronte had a form of sadism within her that caused her characters to suffer so.  Her Gothic novel has become a classic of literature, and like most classics of literature, passed me by.

I suppose that I probably wouldn't have read it in any case, dismissing it as 'chick-lit', a book geared toward women.  That may still be the case, but the newest film version of Jane Eyre makes one interested in picking it up.

Jane Eyre (Mia Wasikowska) is fleeing into the night, finding refuge at the home of Reverend St. John Rivers (Jamie Bell) and his sisters Diana and Mary (Holliday Grainger and Tamzin Merchant).  Billing herself Jane Elliot, we see quick flashbacks to her tormented childhood: orphaned, her aunt Mrs. Reed (Sally Hawkins) soon gets rid of her by sending her off to school, one where sternness is mistaken for piety.

She suffers much abuse, and her only friend Helen (Freya Parks) dies.  She grows up, and finds employment as a governess at Thornfield Hall.  Her charge is Adele (Romy Settbon Moore), a French girl who is the ward of the owner of the home.  The household is watched over by the kindly Mrs. Fairfax (Dame Judi Dench), but although there is some relation to the owner, she is not the head of the house.  That would be Mr. Rochester (Michael Fassbender), a man who comes and goes with barely a moment's notice.

Mr. Rochester is blunt, rude, harsh, and ever so brooding and troubled.  He doesn't like children, but for the vaguest of reasons has taken Adele in.  Although Jane is a poor girl and Rochester a rich but highly tormented man, there is something between them, not spoken aloud, but a charge between them, a meeting of the minds.

Enter Miss Ingraham (Imogen Poots), a woman of breeding whom Rochester appears in love with.  A marriage is proposed, but not to Miss Ingraham.  Rochester confesses his love for plain Jane, and in throws of passion, or as much as Victorian times would allow, she agrees to his marriage proposal.  However, Rochester is hiding a secret from Jamaica, a brewing scandal: he has a wife, who is mad, and has been locked away at Thornfield.  Jane, bereft to discover this on her wedding day, keeps her honor and dignity by leaving Rochester.

Now back with the Rivers', she learns that she is now an heiress in her own right.  St. John Rivers, perhaps in love with her, proposes marriage, but she will not since he wishes to strip her of her independence as herself and be only a 'missionary's wife'.  She goes back to Manderley...I mean Thornfield, finding the place in ruins.  Mrs. Fairfax informs her that the first Mrs. Rochester burned down the place and jumped to her death.  Rochester saved everyone but now has gone blind.  Jane goes to him, and he recognizes her hands, with the lovers reconciled.

I can't help think that the plot to Jane Eyre is pretty outlandish when one thinks of it: crazy woman in the attic, inheriting fortunes from a hereto unknown uncle, but credit should be given where it's due: the novel has stood the test of time.  I would put its success to the central character, who reminds me of  2 Corinthians 4:8-9 (We are hard-pressed on every side but not crushed, perplexed but not in despair, persecuted but not abandoned, brought down but not destroyed).

Jane has been beaten up quite a bit by nearly everyone she's come across, but she has maintained her dignity and moreover, her courage and convictions of right and wrong.  She isn't a jolly girl by any stretch, but she does not sink to self-pity or give up on herself or others.  One admires her strength and principles of doing the right thing, not holding on to anger against those who have injured her but refusing to submit herself to something she believes to be wrong. 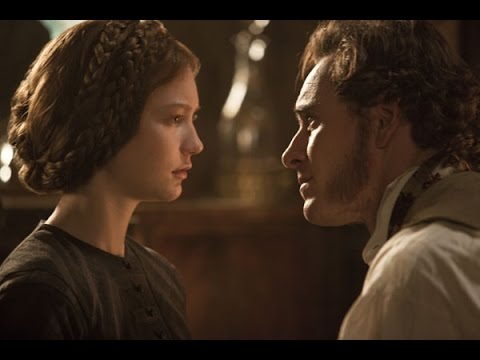 I now declare my love for Mia Wasikowska: a bright spot in The Kids Are All Right (which I wasn't overwhelmed with), she transforms into this girl who has been tormented greatly but who is still strong.  It's one thing to get the accents right, the Australian native switching so easily from American to British English, but beyond her technical abilities, her performance gets to who Jane Eyre is: a woman from a modest background who experiences fear but does not succumb to it.

Wasikowska shows us the strength beneath her, one who even while passionately in love will not live with a man whom she cannot marry (Rochester) or who will submerge her (St. John Rivers).  When she is being questioned by Rochester about her past, her tale of sorrow, she gives the details but does not linger on them, unwilling to let the truly hellish experiences she's endured break her.  Direct and truthful, she is not a meek woman.  Wasikowska brings all the aspects of Jane Eyre to life: her strength and her sadness.

Fassbender is her equal as the ever-brooding, ever-mysterious, ever-tormented Rochester.  He doesn't rant and rave, but through his performance you can see how he was enraptured by Jane, a woman who isn't intimidated by him.  You can see in Fassbender the arrogance Rochester has is covering something dark.  The scene between him and Wasikowska where she has rescued him from a fire in his room is highly charged with suppressed desire, bringing an intensity in both their performances and which would sweep anyone into the romance between Jane and Rochester.

It's a credit to director Cary Joji Fukunaga that he got such excellent performances from all his cast.  We cannot leave out Dame Judi as the kindly but fearful Mrs. Fairfax, one who commands the household not with an iron hand but with a stern but loving one.  Smaller parts are not ignored either.

Perhaps I have been too harsh on Bell (though I stand on what I say about The Eagle), and I admire his desire to break from Billy Elliot.  This is the first real performance I've seen from him, a man (note, I said man, not boy) who is devout but repressed himself, who may love Jane but who cannot see her for who she really is.  Going to even smaller parts (like Hawkins' villainous Mrs. Reed), Fukunaga allows the actors their moments, and moreover, allows the story, courtesy of screenwriter Moira Buffini, to stay truthful to the novel.

When a young Jane (Amelia Clarkson) was asked how could she avoid Hell, she replies matter-of-factly, "I must keep in good health and not die". Bright girl.  The scene between Rochester and Jane when he is interrogating her is also brilliantly written, but I digress.  The young girls (from Clarkson's Jane to Parks' Helen and Moore's Adele) are such wonderful child actors who can handle the material so sharply one admires their abilities.

Side note: though it's never officially stated, and I figure the novel doesn't address this either, there is a suggestion that Adele is Rochester's daughter.  However, not having read the novel, I cannot say for certain. The technical aspects are also excellent.  Adriano Goldman's cinematography gets the moody, Gothic, world of the moors; of particular excellence is when Jane and Rochester first meet: few scenes this year are as atmospheric and spooky as this one, and Dario Marianelli's score never overwhelms the story but enhances Jane Eyre, supporting the emotion and tone of the film.

One can't help admire her determination to be herself despite such terrible ordeals.  Jane Eyre is an independent woman, and Jane Eyre the novel appears to be a model for others: could Rochester's distant relation be Rebecca's Maxim De Winter, and Manderley be far from Thornfield Hall?
Even the plain girl who has mysterious and brooding men bewitched by her have served as Bella Swoon, I mean, Swann's spiritual ancestor?

Hopefully, Jane Eyre the film will serve as a model on how to adapt novels into films: keep close to the source material, give the actors actual characters to perform, and trust your audience to stay with you.

"You transfix me quite", Mr. Rochester tells Jane.  I could see how people could swoon over such words.  When it comes to Jane Eyre, I couldn't agree more.