Howard the Duck: A Review 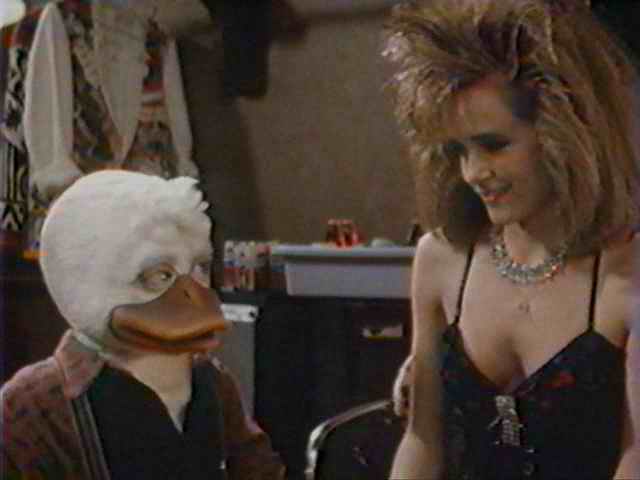 Duck And Cover Your Eyes...

Sometimes one can learn about films not just by watching and studying the Great Ones, but also by watching the absolute worst ones. This certainly was the case for me.

I remember it well, as the song goes. I was about six years old when my mother took me to see Howard The Duck. In her defense she might have thought the title signaled a cute children's film, not the adaptation of a much darker comic book series. I remember there were only three people in the entire theater and this was when multiplexes had a total of three screens!

I feel so old.

In any case, the three people were: my mother, myself, and a bald man. I remember the bald man walking out, and at several times during Howard the Duck I BEGGED my mother to take me out of the theater. I made it absolutely clear: I HATED THIS MOVIE. Being six, I wasn't just going to walk out myself. She wouldn't budge; perhaps she thought it would get better, or having paid for it, saw no reason to leave but to try and enjoy it.


As for myself, it was truly one of the most awful, and I think, traumatic moments of my childhood. I still shiver when I hear the closing song in my head, right down to the quacks. However, something good came out of the sheer disaster of Howard The Duck. It set me upon my path to warn people about bad movies. It helped me discover my calling. I can truly say that Howard The Duck was what inspired me to be a film reviewer, to look on film as something to study. Being six, I didn't put it in those terms, but I know that Howard The Duck is the film that made me want to review movies, at least on a subconscious level. Now that I can, and after a second viewing, this time as an adult, I could see that everything wrong with Howard the Duck is still wrong, wrong, and wrong. 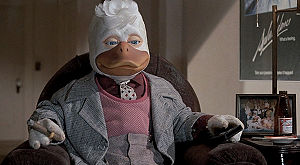 Howard (voiced by Chip Zien, played by other people who would rather, I think, remain anonymous) is a duck who lives in Duckworld, a planet far far away which is like Earth except it is populated by fowl. He's a regular duck, likes his magazines Rolling Egg and Playduck, smoking a good cigar, drinking some beer. Just then, a strange phenomenon brings Howard and his chair from his planet to ours.

How he survived while flying through space we guess is due to the laser beam transporting him.

In any case, once he arrives in Cleveland, he is instantly assaulted by punks until he encounters Beverly (Lea Thompson), lead singer for the group Cherry Bomb. They rescue each other from ruffians, and it's no surprise he goes home with her. Beverly tries to help Howard return to his world and for that, they go to kooky lab assistant Phil (Tim Robbins). Phil is more interested in what the discovery of Howard can do for his career, and Howard, tiring of all these humans, strikes out on his own. Needless to say, a duck trying to make it on his own in Humanworld (especially now that duck season has opened) doesn't have much luck, so back to Beverly, who has grown attracted to her fowl friend.


Phil brings along with Dr. Jenning (Jeffery Jones), who knows why Howard is here. An experiment gone awry transported Howard from his world to ours, and Jarvis believes that by reversing the transporter he might be able to send Howard back. Needless to say, it doesn't. Instead, Jenning inadvertently brings a Dark Overlord of the Universe, who has taken over Jenning's body and will now bring the other Dark Overlords of the Universe to conquer Earth. Howard, less interested about the Dark Overlords and more interested in going home, escapes a mob trying to make duck a la king and with Phil's help, now goes to stop Jenning and rescue Beverly. 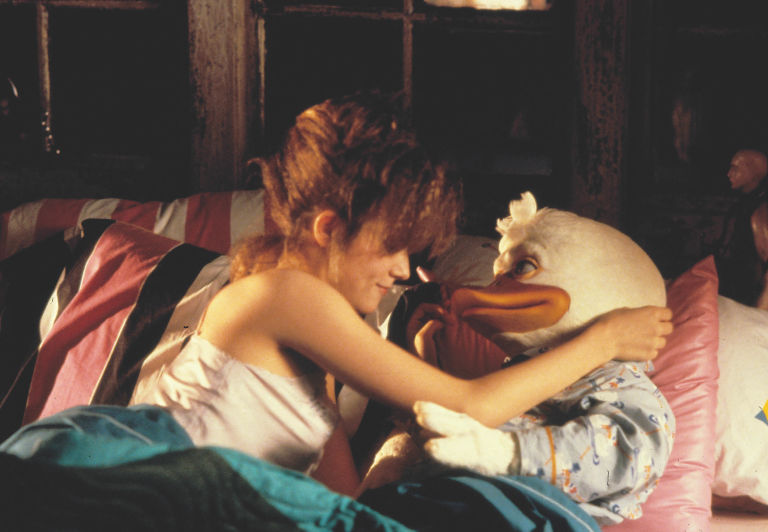 Here at least is one problem with Howard the Duck as scripted by Willard Huyck and Gloria Katz from Steve Gerber's comic book, and just finding one problem is like shooting ducks in a row. Everything about the plot is so shamelessly predictable that one becomes bored with what's going on in the film because we already know where it is going. Therefore, there is no vested interest because we just don't care.

Worse, not only is the story thoroughly predictable, but extremely rushed, as if even producer George Lucas was concerned people would realize what was going on and had to make the film quickly; maybe I should say 'quackly' to honor their awful puns, which they threw at us with abandon.


Granted, there is one aspect in Howard the Duck that may be new, but not in a good way. No matter how hard everyone tries, bestiality is not a good source of comedy or romance, Edward Albee be damned. Love is nowhere near that blind. In fact, to suggest that Beverly would be sexually attracted to Howard is downright disgusting.

It doesn't matter how 'human' Howard is, he is still a duck, and what is being suggested is not funny but extremely uncomfortable for anyone watching.

This leads to one of the biggest problems within Howard the Duck, which all but cooked its goose (if they can give bad puns, why can't we?). The tone of the film is never established: is it suppose to be funny with all those awful puns:quack fu, a police officer saying that Howard will be charged with being an 'illegal alien', or is it suppose to be action/adventure:the Dark Overlord subplot? Putting in romantic music courtesy of John Barry, who somehow ended up in this fiasco, especially in scenes between Beverly and Howard, doesn't help decide what Howard the Duck is suppose to be: comedy, action, spoof?

He creates what is suppose to be inspiring music for whenever our duck takes to being action, but it plays like parody.


As a side note, getting Oscar-winning composer Barry is already a bizarre situation, but how did they ever get Richard Kiley to narrate the opening? Blackmail on both?


The performances were as unconvincing as the duck, who looked freakish and just someone in a bad duck outfit. You can play something like Howard the Duck in two ways: straight or over-the-top, but it has to be consistent. Thompson, to her credit, played it straight, but Robbins was wildly broad as Phil. Jones had the misfortune to have to do both: straight as Jennings, over-the-top as the Dark Overlord. You can't have a villain, one who is suppose to be the ultimate in menace, then throw in comedy lines like "This one's for you, cracker" as he hits someone with a pie. Seriously, a pie?


Even Thomas Dolby's songs, especially the Satanic title song, only make this film more confused as to what it is trying to say: laugh at me or take me somewhat seriously. Amazingly, even though Industrial Light & Magic created the effects, they looked shamelessly fake.


In fact, calling Howard the Duck a real movie is a fake. From the get-go the whole idea of making a live-action version of the comic was a mistake. Unfortunately, the few that paid to see it will have suffered.

Is it a 'so-bad-it's good' film? No, Howard the Duck is just bad. Bad, Bad, Bad. Last Airbender Bad. No, perhaps worse. How anyone could listen to Tim Robbins' views on anything after he thought Howard the Duck was a good script is beyond me.  Then again, he has to eat.


When it comes to Howard the Duck, the best thing to do is to call it a major fowl; given the puns that overwhelm the film, I can say that.