First off, I don't blame Brandon Routh.  I think he did the best he could given the fact that he had no story to work with.  He looked commanding as Superman, but when he was Clark Kent, he had nothing to work with.  In the film, the latter character was basically missing.

"Well...you know...things happen..." Clark says, and the bartender just stares at him.  Routh looks genuinely lost, as if he's trying to find some logic to his lines.  Larson appears lost as well, trying to figure out what the purpose of the entire scene actually is and how it is relevant to whatever plot the film has, another point of contention.

Superman Returns at its heart, had no story to tell courtesy of screenwriters Michael Dougherty and Dan Harris w/story by them and Singer.

Here's where the three of them made their biggest mistake: trying to make Superman Returns essentially a sequel to Superman II.  First, you have to rely on the fact that your audience will know the story of Superman and Superman II, a tall order given that some in the audience weren't even born when that film was released, let alone Dougherty being only six and Harris one year old when Superman II premiered.

Second, by doing that, you have to have a continuity from the first two Christopher Reeve films, but that means introducing points that may not make any sense.  How is it that Lois Lane appears unaware that her illegitimate son is of Kryptonian descent (whose Kryptonian name I have given him is Isra-El)?  An audience watching Superman Returns won't have even the inkling of any of this if they haven't watched the first two films, and even if they did see them, one could make the argument that it still doesn't make any sense (when I finish my Superman retrospective, I will address this point more thoroughly).

They had one of two options: start fresh or try for continuity from the four Superman films.  They opted for a third way: go for the first two and ignore the last two.  This was a terrible decision which brought the franchise to a grinding stop until now.

This may be what Singer meant when he said it was too 'nostalgic' for audiences to embrace.  As for the 'romantic' part, here, Singer is lying to himself.  Superman: The Movie managed to mix the romance between Lois and Superman brilliantly without hampering the struggle between Superman and Lex Luther.  The romance as portrayed by Routh and Kate Bosworth as Lois Lane didn't work because they frankly were badly directed.  They looked like the rest of Superman Returns: somber, overly serious, filled a sense of the 'importance' of the myth of Superman that you would think they were making The Iliad, not a comic book-based film.

Here, Singer and I see eye to eye.  The whole tone of Superman Returns was far too ponderous and self-important to make it entertaining and fun.  This is especially true with whatever religious overtones Singer had in the film.  Superman may have been inspired by the story of Moses, and he may even have parallels to Christ (side note: I remember going to a Christian bookstore and seeing a tome making such comparisons, which I reject).

However, Singer and I appear to agree that the attempt to make these analogies so overt brought the project down.  Superman is not a Christ-like figure or substitute for Jesus.  I digress to say I don't consider it blasphemous, just badly-thought out.  Why some Christian leaders tried to embrace the parallel that was attempted is thoroughly bizarre to me, and that I might consider blasphemous).

By trying to make Kal-El into more than a superhero, to almost, in a sense, make him Divine, Superman Returns was going overboard in its efforts to make him into something he was not and was never meant to be.  They should have stayed to keep him as merely the Last Son of Krypton, not the Savior of the World.  That position has already been filled, thank you very much. 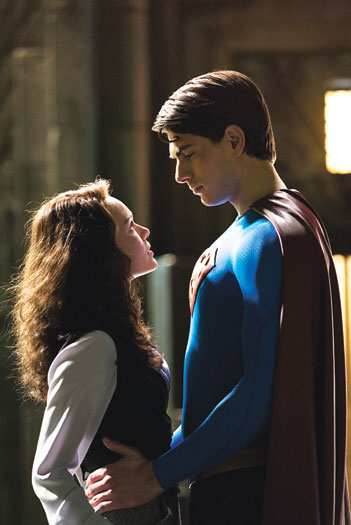 I understand why Singer won't cop to the mistakes as granted, I see them, in regards to Superman Returns.  He can't bring himself to admit that there was no story to the film.  We are told that Kal-El went away for five years to see if Krypton was still around, yet they never gave an explanation as to how no one on The Daily Planet staff ever made the connection between Clark Kent's absence and Superman's absence.

I also think that not having the phrase, "truth, justice, and the American way" was a terrible mistake, Perry White saying, "truth, justice, all that stuff" (emphasis mine).  I know why it was done: to not make Superman a jingoistic character and downplay his American roots so as to not offend a world that appears to hate America (this is the same thing that is happening to Captain America: The First Avenger, a downplaying of the 'America' part of 'Captain America').

However, anyone watching Superman: The Movie sees that this phrase was used without a hint of irony and it has never been a source of controversy or scandal.  Let's face it: Superman is not a citizen of the world.  He is an American immigrant success story.  He won't fight as America's armed forces, but it's idiotic that a man brought up in Smallville, Kansas would possibly not have had an influence from his Middle American upbringing.  How exactly does someone brought up on a Kansas farm not believe in 'the American way' (however he may interpret that)?

I have long argued that Superman Returns was too somber and self-serious to be enjoyable, and I am glad that Singer has come around to seeing things my way.  Yes, I know he probably doesn't care one bit what my opinion is, but it may prove that I see things in Superman Returns that contributed to why the film didn't go over well with audiences.  Critics may have loved it, I being in the minority in this, but the public by and large still goes for the Christopher Reeve films, at least the first two, than the Routh film.

I feel for Routh and Huntington, whom I thought were good as Superman, less so as Clark, though there was potential, and Jimmy.  Even Frank Langella was decent as Perry White although Jackie Cooper is still so far the best Daily Planet editor.  Bosworth, Kevin Spacey as Lex Luther, and James Marsden as Richard White, a character that really was unimportant, did not fare so well, I think mostly because there simply was no story for them.

Worse was Kal Penn as one of Luther's henchmen.  Throughout the film I wondered what his reason for being in the film actually was, given he didn't have a line of dialogue and his screen time consisted entirely of staring around, looking as if he had something to do or say but never getting there.  However, now I'm digressing into reviewing the film  which is for another time.

How I fear what will happen now that Zack Snyder is filming Superman: Man of Steel.   Yes, the film may actually be good, no way of knowing until it is released.  However, I fear that they will opt for a Batman Begins-style: very dark, gritty, morose, unhappy, which is not true to Superman as a character.  Kal-El I've always felt is an optimistic character, one who believes good will triumph over evil.  The darkness within the rebooted Batman series may work in its world operative word: may, since at times it can go wildly overboard in its nihilism but Superman and yes, Spider-Man, should have some hope to them.

The future of the franchise should not be measured by how much money Superman: Man of Steel makes, or even on how critics respond to it.  It should be judged by the emotional impact the audience has with the character.  Spider-Man and Spider-Man II, Superman and Superman II are still loved because we care about the characters.  The sequels following those films aren't, for a variety of reasons but among them the disconnect between the main characters and us the viewer.  Same goes for the Tim Burton Batman films vs. the Joel Schumacher.

I wish Snyder and his cast/crew success. I also am pleased Singer admits to something I've known for some time.
Posted by Rick at 4:24 AM