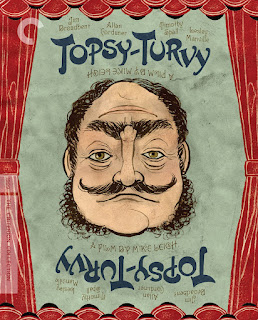 In The Fighter, there's a scene where a man takes a potential girlfriend to a tonier part of Boston, ostensibly for a date but really to hide his budding relationship from his family. The film he picks at random is Belle Epoque, which they mispronounce as "Bell Epo-Q". We next see them bored out of their minds, with the woman irritatedly suffering through a dull film as she sees the man dead-asleep, snoring through this artsy feature far removed from their working-class roots.

I imagine they would have the same reaction to Topsy-Turvy, a love letter to the art of artistic collaboration and conflict. At times too indulgent in presentation, Topsy-Turvy can also be a celebration, or at least an acknowledgement, to the personal and professional rewards of the creative process.

Theater masters Sir Arthur Sullivan (Allan Corduner) and William Gilbert (Jim Broadbent) are finding that they are in something of a creative rut. Sullivan is not in the best of health; Gilbert is not in the best of tempers. Their collaborations have been wildly successful, but Sullivan in particular thinks their comic operas are a distraction from more serious work. Moreover, Sullivan thinks they are repeating themselves, which Gilbert disagrees on.

Their newest production has to be delayed, with a revival of their previous work, The Sorcerer, as a stopgap until they can finally get their creativity back. Upon seeing a Japanese exhibition, Gilbert comes upon the idea that will become The Mikado. This idea reignites Sullivan as well, and the rest of Topsy-Turvy revolves around the various rehearsals and all that entails. The temperamental stars, the exacting nature of producers, the excessive calls for authenticity. All the preparations finally result to the premiere, where The Mikado becomes a triumph. 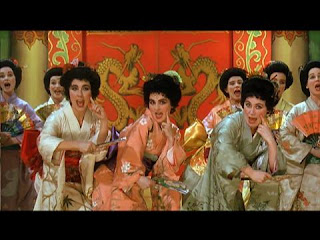 At nearly three hours, Topsy-Turvy will test many a viewer's patience. A lot of Mike Leigh's film seems to take up more time than necessary on giving us this peek into Victorian theater. We get a lengthy recreation of a scene from The Sorcerer that while nice separate from the film adds nothing to the overall story. At the hour and 17-minute mark, I stopped watching, feeling that Topsy-Turvy dragged far too much.

Perhaps having an intermission would have helped the film (as well as cutting most if not all of The Sorcerer sequence). I found that once I took a breather, I could appreciate Topsy-Turvy a little bit more. I think it is that once we get to the central plot (the creation of The Mikado), the film picks up.

The various difficulties with mounting a production: troubled and troubling actors, the loss and gain of star-making moments, efforts to be accurate that end up as clumsy efforts at ethnic accuracy. These are moments that anyone involved in the creative process understands.

The second half allows for funny and true moments. In an early role, Kevin McKidd's turn as prudish divo Dulward Lely is amusing, insisting on proper recognition while complaining that his costume is too revealing. Timothy Spall as the aging star whose big number was cut to have the cast stand up for him also works.

As the leads, both Broadbent and Corduner as the temperamental Gilbert and surprisingly lascivious Sullivan did well. Their interplay as they work together while working out their differences is enjoyable to watch. It is unfortunate that it takes over half an hour to see them share the screen, which is due to the length of the film itself.

The makeup and costumes are deserving of their Oscar wins, and we get beautiful recreations of the Victorian era.

However, again at close to three hours Topsy-Turvy can be very punishing. I also think the film is a little too hoity-toity for my tastes. As such, I have to give it the mildest of dislikes. I'm sure that a Mikado performance is more entertaining and probably shorter than the film on how it came to be.