Lightyear, despite what audiences may think, is not really part of the Toy Story universe. Well, it is, in a roundabout way, but then, it isn't, according to those who made it. Confused? Don't worry, you won't get anything out of it.

Buzz Lightyear (Chris Evans) is leading a large ship of travelers in space to a new planet when he sees an uncharted planet. Taking the ship to explore if it is habitable, he and his loyal second-in-command Alisha Hawthorne (Uzo Aduba) quickly find that it is a dangerous world. While they manage to save those aboard the ship, they are now marooned on this planet, now named Takani Prime.

Making the best of things, the passengers set up a colony. Buzz is determined to finish the mission, but that requires going into hyperspace. After the first test run, Buzz discovers that what to him are mere minutes are really four years on Takani Prime. Nevertheless, he persisted. Approximately 62 years pass, during which Alisha has married a woman named Kiko, given birth to a son, had a granddaughter and died.

Also after 62 years, Buzz's pet cat robot Sox (Peter Sohn) has finally gotten the formula right to get to hyperspace and take everyone off Takani Prime. Buzz, however, has to deal with two problems. One is the invasion of Takani Prime from a mysterious figure named Emperor Zurg (James Brolin). The other is Izzy (Keke Palmer), Alisha's granddaughter, and her two companions: clumsy Mo Morrison (Taika Waititi) and elderly convict Darby Steel (Dale Soules). Forced to join forces with "rookies", Buzz must now fight alongside them to stop Zurg and save the community. Zurg, however, has a shocking secret of his own that ties him to Lightyear, one that could destroy past and future. Buzz now has to make many choices and do the right thing.

Ah, to be so meta. Lightyear wants to have its cake and eat it too. It wants to be simultaneously tied to and untethered to the Toy Story franchise. It wants us to imagine this is a live-action film as well as the big faux-1995 hit that inspired the Buzz Lightyear action figure which Toy Story's Andy so longed for. In fact, Lightyear opens with an almost Star Wars-like opening text saying that Lightyear is the 1995 film Andy saw that made him fall in love with Buzz Lightyear.

If that is the case, one is left wondering why Andy preferred a Buzz Lightyear action figure when a Sox one would have been the more popular one.

Lightyear is a pretty pointless film. Worse, it is a dull one, with little wit or joy to make one want repeat viewings, let alone inspire a crazed in the Clinton years. The Buzz Lightyear in Lightyear is a pompous nitwit, one who changes little between ineptly putting potentially millions of lives at risk due to his own idiocy and refusing to accept any help.

Perhaps the heights, or depths, of Buzz's intelligence is when he literally tries to stop a falling spacecraft with his own body strength. I am aware the Chris Evans played Captain America, but even for an alleged "it's animated but it's really a live-action film" this is daft. I imagine that if Lightyear had been the live-action film Disney and Pixar insist audiences are supposed to treat it as, they would have either rolled their eyes or howled with laughter at Buzz Lightyear attempting to either slow down or stop a spacecraft with just his own physical strength.

IF we treat Lightyear as this action/drama they'd like us to, I'd have to say that it fails spectacularly. None of the characters are interesting. Buzz is dull, dim and not interesting. The comic relief from Mo Morrison falls flat. Darby is nothing more than a crochety old person (often I was not sure if Darby was a male or female). Worse, she (I think Darby is female) is so uninteresting that both Buzz and I had a hard time remembering her name.

"Nice job, elderly convict," Buzz tells her at one point. It was such a low level of interest that Buzz apparently did not bother to learn her name. I think I heard it once, and I couldn't remember it either, so this was a broken clock being right twice a day deal.

Lightyear, if it is tied to the Toy Story mythos, now opts to contradict what people have seen before. If my memory of Toy Story 2 serves correct, Emperor Zurg turned out to be Buzz Lightyear's father, an obvious spoof of The Empire Strikes Back. Now, we learn that Zurg is really an older version of Buzz.

It's as if Lightyear almost went out of its way to upend what audiences were already used to. 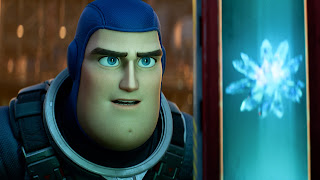 The Star Wars connections are fast and furious in Lightyear, to where if Lightyear had actually premiered in 1995, George Lucas would have sued for copyright infringement. You have an explosion that mirrors the destruction of the Death Star. You have a hologram that is inches short of saying, "Help me, Obi-Wan Lightyear. You're my only hope". It is one thing to spoof famous moments.

It is another to flat-out rip them off and try to pass them off in what is meant as a major franchise starter.

That Lightyear fails so sadly in being fun or interesting makes its naked suggestion for a sequel more sad than hilarious.

So much of Lightyear is so uninteresting. He is not a hero, but an idiot. He does not seem to either understand or care that rather than work to get people off the planet his incompetence got them there, he keeps losing years. We're supposed to believe it was a robotic cat, and not the scientists, who figured out the hyperspace formula. We're supposed to believe that said robotic cat can run for over 60 years without any kind of maintenance.

Lightyear, to be fair, does have some positives. Michael Giacchino's score is quite good, and some moments are visually arresting. Of particular note is when Izzy has to cross into deep space. However, because Lightyear took itself so seriously, there is no real joy in the project. I get that it is meant to be seen as this great space epic that inspired the toy, not the toy's origin story. However, sometimes people can be too clever by half, making what could have been a fun family film into a self-important, dull one.

Lightyear will not last in the memory by the end of the year, let alone to infinity and beyond.