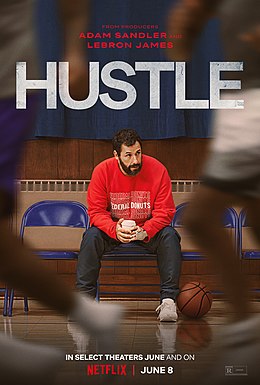 I begin my Hustle review with a confession: I know very little to nothing about basketball. All these years, I thought Dirk Nowitzki was Polish. I went to my first NBA game this year and while I enjoyed it, I also was a bit lost. I had to call my BFF and ask him not only who this "Luka" was but how to pronounce his last name. I figured he was talented given his jerseys and t-shirts were all around me. It was so to where I bought a Doncic t-shirt with only the vaguest idea who he is. As such, Hustle is probably geared more towards current basketball fans than to people like me. However, the story more than makes up for any gaps I had over the myriad of NBA cameos that the film has.

Philadelphia 76er international scout Stanley Sugerman (Adam Sandler) yearns to be a coach both to move up career wise and to stay closer to his wife Teresa (Queen Latifah) and daughter Alex (Jordan Hull). The new 76er owner Vince Merrick (Ben Foster) however, is not sold on Sugerman being at court unless he finds him a big talent to revive the team's fortune.

Stan thinks he has when he finds Bo Cruz (Juancho Hernangomez), a Spanish construction worker and street basketball hustler. Stan sees Bo has the raw talent and physicality to be in the NBA. However, Bo also has both no real experience and anger issues. Despite having no backing from Vin, Stan brings Bo to America to train in order to be looked over for a potential career. Bo has to leave his mother and daughter behind to pursue this unlikely goal. He also has to endure the taunts of Kermit Wilts (Anthony Edwards), the basketball phenom who has a long amateur record to make him into an All-Star.

Bo flounders a bit with scouts, his inexperience and anger getting in the way. However, with some social media savvy from Alex and a little help from figures like NBA legend Julius "Dr. J." Erving, both Bo and Stan may reach the NBA together, if separately. 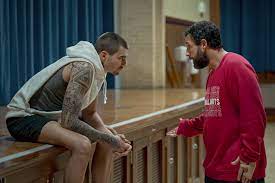 As I watched Hustle, I gave it the nickname My Fair Luka since in some ways, the film reminded me of My Fair Lady. Here is the older mentor who will take the common street person and transform him into an NBA superstar. In some ways, Hustle does not break the mold when it comes to inspirational sports stories. You have the said older mentor, the younger talent, the training montages, the antagonists, and a triumphant victory for both.

That being said, one can see Hustle knew it was staying within certain confines and used them to its advantages. It does stretch believability that Stan would come upon a major talent almost by happenstance. However, as Hustle does not pretend to be above cliches, you can roll with those moments. The training montages were impressively filmed, with some excellent camera work and editing that made them visually unique and interesting.

Hustle does best when it gives us an insider's look at the business of basketball. We see the front office meetings where various players are judged. We see the intense work the athletes go through to remain major players.

What is also good in Hustle is that most of the NBA players who appear handle the acting part well. Hernangomez is the co-lead in Hustle, and he is surprisingly strong as Bo, the street kid who is his own stumbling block. I do not think he has a career in theater when he retires, but he did make you forget that he is in real life a professional basketball player. Unlike some of the other NBA stars, Hernangomez did not stumble much when it came to line delivery. Sometimes he could be a bit stiff, but on the whole he did well.

Anthony Edwards was equally respectable as Wilts, the taunting antagonist. Granted, I was expecting Anthony Edwards the actor from Top Gun and E.R. when I saw the credits. That said, the NBA Anthony Edwards did well in his small role, though he was more saying the lines than acting them. 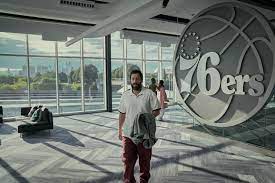 Many of the cameos were handled well, though I figure those who follow the NBA would recognize the players more than I. Some cameos, like those from Allen Iverson and Luka Doncic, were almost "blink and you'll miss them". Others, like Nowitzki, were a little on the bad side. On the whole though, they were handled well.

The professional actors had some strong performances. Adam Sandler has for now left the man-child roles that propelled him to fame. His Stanley Sugerman was a driven but regretful man, one who has a passion for the game but also who is worn down by it. He finds basketball a curious mistress, but one he loves. It is a strong dramatic performance, whether it is in a delight in teasingly being hard when training Bo or revealing the tragedy that still haunts him.

Hustle unfortunately gives both Queen Latifah and Ben Foster little to do, which is a shame. In particular with Foster, you wish he would have been given more than the somewhat cliched arrogant boss who has it in for our hero role. However, Foster is an exceptional talent who does strong work with his small role. Latifah is somewhat relegated to "supportive spouse", but she is also able to hold her own when not as supportive.

Hustle is probably more for basketball fans, like Sandler, who follow the ins and outs of the sport. It however is not inaccessible to non-basketball aficionados. I did not feel left out due to how Hustle is not exclusively about basketball but about the drive to rise above where one is at. Entertaining, well-acted even by the athletes, I think both fans and haters can enjoy Hustle.