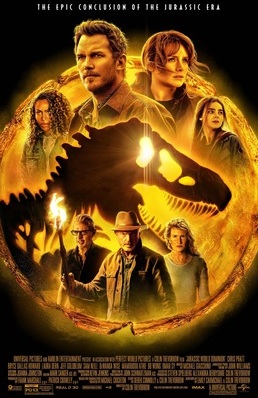 I see that I am fighting something of an uphill battle when it comes to Jurassic World Dominion, the film billed as the conclusion of the Jurassic Park/World film franchise. Audiences, it appears, seem to love this hybrid of nostalgia and action. I did not hate it, but I am also puzzled as to why audiences love it.

Jurassic World Dominion essentially is two films that run parallel to each other, briefly cross paths but never really connect, then diverge to their own stories. Plot One involves Owen Grady (Chris Pratt) and Claire Dearing (Bryce Dallas Howard). They have served as de facto parents to Maisie Lockwood (Isabella Sermon), the clone we last saw in Jurassic World: Fallen Kingdom. The sullen, surly child hates being hidden away from the world, but hidden away she must be. She, as a clone, is the target of nefarious figures.

Unsurprisingly, she is abducted, along with the child of Owen's favorite dinosaur, Blue. It's up to Owen and Claire to rescue Maisie. That involves going to Maltese dinosaur black markets and getting help from Kayla Watts (DeWanda Wise), a pilot who can spirit them into the heavily guarded dino sanctuary run by megacorporation Biosyn, headed by the shadowy Lewis Dodgson (Campbell Scott).

Plot Two involves giant locust plaguing the American Midwest and South. Dr. Ellie Sattler (Laura Dern) has been investigating the giant locust, which curiously affect only non-Biosyn seed. Fortunately for her, Dr. Ian Malcolm (Jeff Golblum) happens to be lecturing the Biosyn staff at Dodgson's invitation, so he can provide a way for her to get locust samples to prove Biosyn is up to no good. To provide credibility, she gets her fellow Jurassic Park survivor Dr. Alan Grant (Sam Neill) to join her.

It's here that Grant and Sattler discover Maisie, that Biosyn falls into total chaos, and then after the two groups complete their goals, go their separate ways. 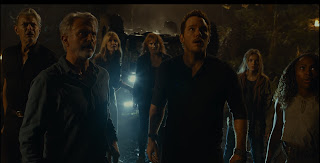 I kept an informal track of when the cast of the Jurassic Park films and the cast of the Jurassic World films finally met. For a film that lasts approximately two and a half hours, the two groups finally worked together at about the 1 hour and 45 minute mark. Granted, I could be wrong in my calculations. However, it does show to me at least that essentially neither group was needed for the other group's plot.

Early on in Dominion, I thought that there were two plots going on and that one of them could work without the other. I am astonished at how odd everything around Dominion is, particularly with the superfluous Sattler, Malcolm and Grant.

For reasons I cannot fathom, Sattler and Grant were amazed at the creatures Biosyn had in its sanctuary. I thought to myself, "They've encountered dinosaurs before. Moreover, dinosaurs have apparently been around for close to thirty years. Why then are thy still amazed?". I would have thought the novelty had worn off. 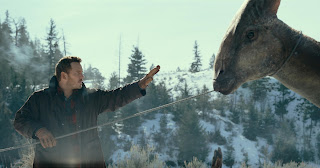 However, like many audience members, the novelty has not worn off. Nostalgia can get over many things such as logic or plot. For example, when a group of them were trapped in a cave and Malcolm could get them out by punching in the right code, I saw Maisie pick up a skull to throw at the dinosaurs. I wondered, "Did people already die here and Biosyn did not appear to notice or care?"

As Dodgson was attempting to flee his own fallen kingdom, he takes with him an old, beat-up shaving creme container. Am I to assume that this was the container that held the stolen samples from the first Jurassic Park film? If so, how was it found, given it was buried in the mud during a hurricane when the park first fell apart? I figure whatever was in that container had long ago become useless, so what was the point of it being there?

Moreover, while there were a lot of dinosaurs running around the world, why did only the CIA notice giant locust were swallowing up whole fields?

I genuinely felt for Sam Neill, up to a point. I figure he made a great deal of money to come back, but out of the already unnecessary Jurassic Park characters, his Alan Grant particularly suffered. Many times, he looked genuinely lost to where I thought Grant had dementia. When he finally sees Dr. Wu (B.D. Wong), Grant cocks his head slightly and says, "I Remember You", but I was not sure if he meant that as an accusation or as surprise he recognized anyone. He was forever kept out of things, such as Malcolm and Sattler planning to break into the underground laboratory.

Instead, he was shunted off for some odd, alleged comedy bit involving a Biosyn barista, and even that got a bit lost in the shuffle. Why he needed to be both included and excludes is a mystery.

So much of Dominion seems put together haphazardly, as if screenwriters Emily Carmichael and Colin Trevorrow (who also directed) felt logic was a bother to deal with. Perhaps this is a spoiler, but apparently Maisie is not a real clone, or at least a clone that was birthed versus some lab experiment.

I don't know, a lot of Dominion did not make sense to me. I figure it can be explained by wiser people, but I also think that the main issue of "two films for the price of one" still creates a difficult situation.

I do not think there was any actual acting, unless it was either over or under. Jeff Goldblum has perfected his slightly eccentric persona, but I was surprised at how lackadaisical he was when trying to break people free. No sense of urgency or even realization of the potential for death seemed to disturb him. Pratt, to his credit, handled the action well, but I have not shifted my view that he is more an action star than actor.

Sermon came across as highly unlikeable to where I would not have objected if she had been eaten by a dinosaur. Scott seemed more funny than dangerous as the crazed evil billionaire. Wise was the only one to come out well out of this as the competent pilot.

I did not hate Jurassic World Dominion. I just did not have as good a time as I did in Fallen Kingdom, though to be fair my enjoyment of the latter was more for the unintended humor than anything else.