The Northman: A Review 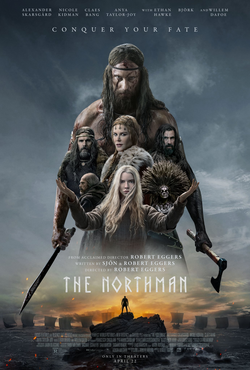 One looks at The Northman with respect in that it clearly stayed within its vision, even if that vision was extremely long and not very deep. Trippy, a bit bonkers and long, The Northman is a visual, if trying, feast.

Nordic Prince Amleth rejoices at the arrival of his father King Aurvandil (Ethan Hawke). Aurvandil's Queen Gudrun (Nicole Kidman) also rejoices as does his brother Fjornil (Claes Bang). Amleth is initiated into the world of men through a psychedelic ceremony led by Heimir the Fool (Willem Dafoe), the Court Jester and mystic.

There is evil afoot, however, when Fjornil kills his brother to seize the throne and the Queen. Amleth flees swearing to avenge his father, save his mother and kill his uncle. Years later, Amleth (Alexander Skarsgard), has become a fierce Scandanavian warrior, a beast inside man-flesh. Killing his way through the land of the Rus, he encounters a vision from a Seeress (Icelandic pop singer Bjork), detailing his destiny towards his stepfather/uncle.

Now hiding out among captives bound for King Fjornil's realm, Amleth hooks up with the Slavic Olga of the Birch Forest (Anya Taylor-Joy) in every way conceivable. He saves his half-brother Gunnar's life, with the royal family unaware that the long-lost prince has returned. However, far from this being a happy reunion, there are a few surprises for Amleth before the Valkyries carry him to Valhalla. 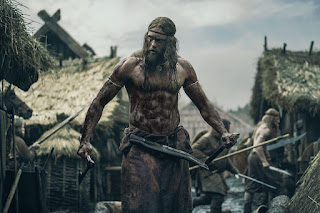 In many ways, The Northman is not a particularly original story despite being based on the Nordic legend of Amleth. I do not think it helps that the dialogue is pretty stereotypically Norse in manner, very gruff and slightly pompous. The manner in which everyone speaks is rather grand but also slightly eccentric to modern ears. One wonders if people in pre-Christian Scandanavia spoke in such tones.

However, I do not think people will watch The Northman for an exploration into Amleth's psyche. They will go for the visuals, which are exceptional. The cinematography of this world via Jarin Blashke is beautifully rendered. The final battle between Amleth and Fjornil in what looks like literal Hel is visually arresting, a vision of fire. Even the more psychedelic scenes where Amleth has visions do not look completely bonkers.

You also revel in Robin Carolan and Sebastian Gainsborough's score, full of blood and thunder so in tune with Vikings (no pun intended).

I thought well of some of the performances, particularly Kidman as the Queen who is more than what she appears to be. In his small role, Willem Dafoe as the spooky Court Jester embraces the cray-cray. Skarsgard is not asked much of save to be the stereotypical Viking warrior and show off more of his physique.

What I did have a problem with The Northman is its two-hour plus running time. I confess I did nod off for a bit, overwhelmed by the constant visions and generally crazed manner these berserkers behaved at. I also was surprised that a few times, the audience chuckled if not flat-out laughed at some of the intonations and what appears exaggerated manners of the characters.

The Northman will, I imagine, try some people's patience in its length and violence. Perhaps it would have been better to make this a miniseries versus a feature, but in terms of production I thought well of the film. I do not know if I would watch it again, but on the whole, it works as eccentric entertainment.