Going with my mother to the movies is an adventure unto itself.  It's extremely rare for her to want to see a film in a first-run theater, as she prefers to wait until it is in the cheap ones.  However, she seemed very excited for Geostorm, especially since one of the costars was Mexican comedian Eugenio Derbez, whose comedy stylings I have never found funny, but I digress.

I told her that the screening she wanted to go to was an XD Reserved Seating one, which meant that it would cost more.  She didn't believe me, and was therefore astonished that this little sojourn sans popcorn and soda was $20.  She could not stop laughing at the idea of 'reserved seating' for any movie, let alone one which was a virtually empty theater.

She also found the idea that I would actually look for 'our seats' hilarious, though she conceded that if this had been around when we saw the Planet of the Apes remake we would not have seen the fistfight that broke out when two men fought over particular seats.

Geostorm has been bashed left right and center, but you won't find much bashing here.  It's all love.  Geostorm is hilarious, as hilarious as the idea of 'reserved seating' in a movie theater is to Mom.  I have seen worse films than Geostorm.  I've even seen worse films than Geostorm from its director and co-writer, Dean Devlin.  It's not quite on the 'so-bad-it's-good' level, but it is if anything a warning, not about the dangers of global warming/climate change, but on how attempting to mix a serious subject with big-budget film-making leads towards other unintended disasters.

The Earth if being overwhelmed with natural calamities, but as the voice-over of a little girl says, 'nobody listened'.  At least until it got too much and the world put aside their differences to work as one to build a space station that would control the weather spearheaded by the Americans and the Chinese (because we need to throw in something to the Chinese film market which is fast becoming the actual target audience of most films, but I digress).  This set of satellites, called Dutch Boy, is being run by the U.S. but in short time it will be handed over to an international body.

As a side note, why would Dutch Boy be reasonable but Reagan's Strategic Defense Initiative, derided as 'Star Wars', be bonkers?  Just a thought.

The creator of Dutch Boy, Jake Lawson (Gerard Butler) is a Scottish-American braggart who runs afoul of a U.S. Senator (Richard Schiff, who gets this one scene as isn't heard from again) at a hearing.  As payback, Jake is dumped as the head of Dutch Boy and that title is given to his brother, Max (Jim Sturgess), a State Department lackey who has better people skills.

Three years later, as Dutch Boy is about to be handed over to the international group, something begins to go wrong.  An Afghan village is literally frozen, killing everyone.  Max informs President Palma (Andy Garcia), along with Secretary of State Dekkam (Ed Harris) of the malfunction.  President Palma tells Max to get Dutch Boy fixed, and who can do it but Jake? Jake goes up to the International Space Station, sight of a mysterious death prior to the malfunction.  Up there, Jake Lawson, creator of Dutch Boy, is unrecognized by the crew, none of whom apparently know who he is or even why he is there.  Aided by German commander Ute Fassbinder (Alexandra Maria Lara), they begin investigating what is going on.

Good thing too, as Dutch Boy continues to behave strangely.  It attacks Hong Kong (again, note the Chinese market plug), where Max's friend Cheng Long (Alexander Wu), head of the Hong Kong section of Dutch Boy on Earth, has barely survived a series of gasline explosions caused by Dutch Boy.  Cheng also tells Max two things: if things continue to go wrong the Earth will be ravaged by a 'geostorm' (a series of natural disasters that will meld into one massive one) and that he pretty much knows the what and who of this crisis.

They arrange to meet, and I really don't have to tell you the end result of that.

As the Lawson Brothers work their own investigations, we learn of the massive conspiracy involving Dutch Boy, one that reaches to the very epicenter of power.  Max convinces his secret girlfriend, Sarah (Abbie Cornish), the President's Secret Service agent, to essentially kidnap the President to stop the plot the President may be heading up.

Yes, it is a bit convoluted.

Things get more dangerous when we find that the President may actually be a target, as another storm is about to engulf Orlando, site of the Democratic National Convention that has renominated Palma for a second term.  The DNC gets blown to smithereens, and now it's a race to stop the geostorm from destroying all civilization.  It also means stopping Dutch Boy, which is now out of control and is in self-destruct mode.

You have to laugh at something like Geostorm, and believe me, I did.  So much of it is so wildly misdirected, and I don't mean just literally, though Devlin was a lousy choice to attempt and make the actors act or move the story in any plausible or logical way.

When Dutch Boy begins its countdown to self-destruct, Jake orders everyone to abandon ship.  At that moment, the first thing that came to me was Spaceballs.  I'm not being facetious, I'm not trying to make a joke.  I'm quite literal in this.

Seeing everyone flee for their lives in their 'panic', the Spaceballs Theme popped into my head to where I was waiting for the Bearded Lady to push Dark Helmet and ask, "Who are you: one of the freaks!?"  It's so unintentionally hilarious, and I found myself in the virtually-empty theater laughing myself almost out of breath at the inanity of it all.

There are just so many really wild leaps of 'logic' in Geostorm that leave you wondering what Devlin and co-writer Paul Guyot were thinking (though I figure more than those two pairs of hands were in this fiasco).  At the beginning of the film, Jake is so famous the security guard at the Senate hearings goes on and on about how great Lawson is.  Three years later, the Dutch Boy crew literally has no idea what Jake Lawson looks like, let alone who he is.

One of the Dutch Boy crew, Duncan (Robert Sheehan) wisecracks when Lawson gets there about how 'the Americans' have to come and rescue them.  Lawson then tells him that in reality he and his brother (Max) were born in the U.K. and later came to America.  Perhaps this explains why Jake has his Scottish brogue, but it doesn't explain why Max doesn't.  The fact that there's an eleven-year gap between them (Butler is 47, Sturgess 36) might, might cover up this oddity, but it doesn't make it any more logical.

In the really strange and tortured logic of Geostorm, the DNC is of particular interest.  If Geostorm is to be believed, the closing speech of a political convention is done by the Vice President, making the President a warm-up act.  Moreover, to escape the convention Sarah has to fake an assassination attempt at the convention.  Here, no Secret Service agents rush to get Vice President Miller off the stage.

The second person in succession to the most powerful office in the United States is left pretty much to fend for himself.

I don't know why this particular detail stuck out, but it did.

What also stands out is how Geostorm is so hopelessly cliched and predictable.  When Cheng tells Max that he'll meet him at a specific location they used to meet, I said out loud, 'he won't make it out alive'.  As Jake and Ute look like they are about to bite the dust, my Mom rejoins with, 'Oh, he's going to make it'.  When I asked why, she said, 'Because he made a promise to his little girl.  You can't expect him NOT to keep it!'

That promise Jake made to come back pretty much insures that Jake is in no danger, taking that element out and having us care even less about these one-dimensional people.

Some of the performances you really can't fault for being bad.  Garcia and Harris didn't even bother: they took their money and prayed to leave Geostorm with some sense of dignity.  I feel for people like Schiff and Mare Winningham, who is also reduced to one scene, if not one line.  Why didn't Devlin make her the villain?

As for Butler, Geostorm raises the question as to why he keeps getting work, even in schlocky nonsense like this Sci-Fi Channel knockoff.  Yes, I enjoyed the (Blank) Has Fallen films and Gods of Egypt, but they at least knew they were nonsense.  Geostorm is so earnest in its environmental message that it needs someone to be believable as this brilliant, professional scientific mind.

Gerard Butler does not fit the bill as a brilliant, professional scientific mind with his permanent stubble, his tough exterior and his 'tell it like it is' manner.  He's all right in action roles, but Geostorm isn't meant to have our lead as an action role. 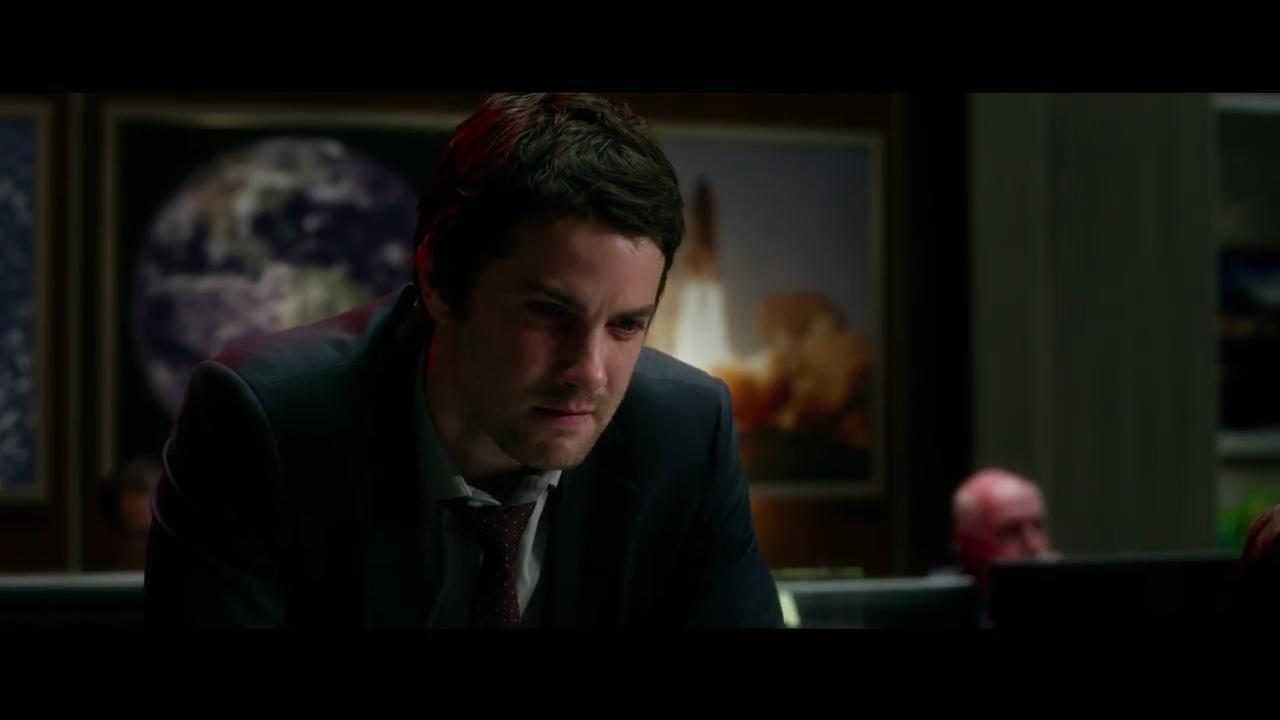 Sturgess, bless him, at least struggled valiantly with his American accent, but I think he had one facial expression regardless of the situation whether anxious or romantic.  Cornish looked deeply embarrassed to be in this and made an effort to try and act, so I can't fault her for doing what she could in this comedy of errors.

Finally, in regards to the overall story, one wonders how Geostorm thought it was making a serious statement about global warming/climate change.  Our villain (one guess as to who that is) said the motives involved using Dutch Boy to destroy the U.S.' s enemies and make America 'that shining city on a hill' again.  You don't invoke one of former President Reagan's most famous sayings without suggesting that there is an agenda behind the popcorn nature of Geostorm.

You also wonder why our villain targeted such places as Rio de Janeiro, Dubai and Hong Kong but not Pyongyang.

As a side note, the attempted melting of Moscow brought back memories of Die Another Day, when a laser came this close to reigniting the Korean War in the same way a laser is melting the Kremlin.

The visual effects, hallmark of a good action/sci-fi film, were second rate, even boring.

There isn't anything to recommend Geostorm, except perhaps for a laugh factor.  Geostorm is not quite on a 'so-bad-it's-good' level, but I can't find it in my heart to think it's the worst film of 2017 that I've seen.  I've seen worse, though none with the misguided sincerity of Geostorm.

Bad acting, cliched and nonsensical plot points, and a remarkable lack of self-awareness all doom Geostorm to a temporary place in basic late-night cable programming.

It could have done with some Bearded Ladies...