We end Series Only of Class with the perhaps appropriately named The Lost.  It suffers from a lot of what doomed Class already: a lot of rushing through stories that could and probably should have taken longer, some unintentionally hilarious moments and despite its claims to the contrary, no real desire to meet up against next term.

Six days after the events of Detained/The Metaphysical Engine, Miss Quill (Katherine Kelly) is still visibly pregnant. This leads to our first unintentionally hilarious moment, our gay Polish immigrant Matteusz (Jordan Renzo) asking how that could be possible.  The sarcastic in me wonders whether, perhaps being gay, Matty does not understand how pregnancies work.  Yet I digress.

We see the Scooby-Doo gang still is split, with April (Sophie Hopkins) singing a new folk song, The Lost (about the only highlight in what proved an almost embarrassing episode).  April senses Corakinus again, and her on/off-boyfriend Ram (Fady Elsayed) knows our Shadow Kin is back...because he ran his scimitar through Ram's dad, Varun (Aaron Neil) right in front of him.

And all that was before the opening credits.

More murder and mayhem are in store, as a devastated Ram goes to April for comfort and help after seeing Daddy killed.  Charlie and Matteusz (seriously, has there been a single scene in all of Class where Matty interacted with anyone else without Charlie being present?) continue to say dumb nothings to each other: "No promises except one.  I promise to love you today.  And tomorrow I make this promise again", Matty coos to Bonnie Prince Charlie.

The teen angst has to give way to the alien invasion, for Corakinus is at it again, killing Vivian Adeola (Natasha Gordon), right in front of her daughter Tanya (Vivian Oparah).  This is second unintentionally hilarious moment: the actual killing of Vivian. 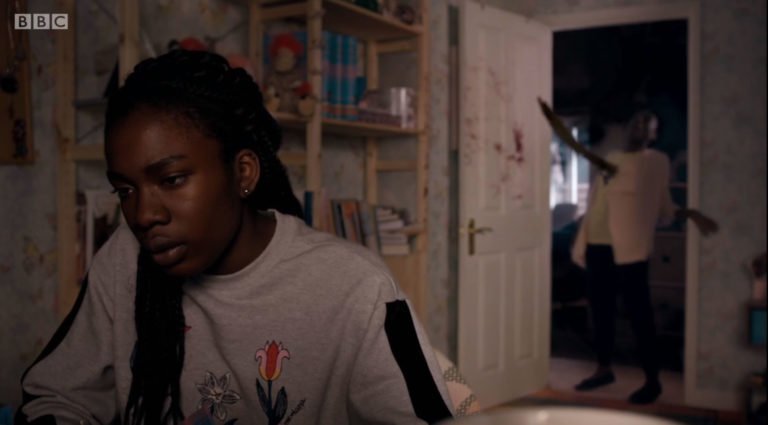 As Mother Dearest attempts to comfort her daughter over the loss of her friends, Tanya is having none of it.  "Things will get better," Mother Dearest begins.  "You'll get older...", with Tanya whispering "Are you sure of that?" and Mother Dearest ignoring her.  "If there's one thing I KNOW...!!" she continued until a shadow scimitar runs right through her.  It almost sounds as if she's saying "NO!!" as well as "KNOW!!", but the whole sequence is just flat-out hilarious.

I'm not a sadist, but I was laughing my head off at this moment, constantly rewinding it to see this laughter-inducing moment again and again.  I think it's because Gordon's voice goes up 500 octaves when she's interrupted midsentence, and on perhaps the worst word to stab someone on.  The wild back-thrust she has adds more hilarity to it all.

What is it about a show that almost delights in killing parents off, and does so in a way that makes people laugh out loud?

Now that Tanya is an orphan and unless her brothers are of legal age will force the state to become Tanya's legal guardian, she does what anyone whose mother was run through by the Shadow Kin would do: race over to Miss Quill to train in martial arts.

Corakinus finally makes an appearance, holding April's mother hostage.  He can't kill her because of the powers she got earlier as a result of his connection to April (I think), but by this time, Mattlie finally stop making googly-eyes at each other long enough to try and help the others.  Charlie (Greg Austin) is holding an alien gun, but Prince that he is, can't actually shoot it.  Worse, Corakinus has infected him to where if Charlie kills Corakinus, he kills himself. 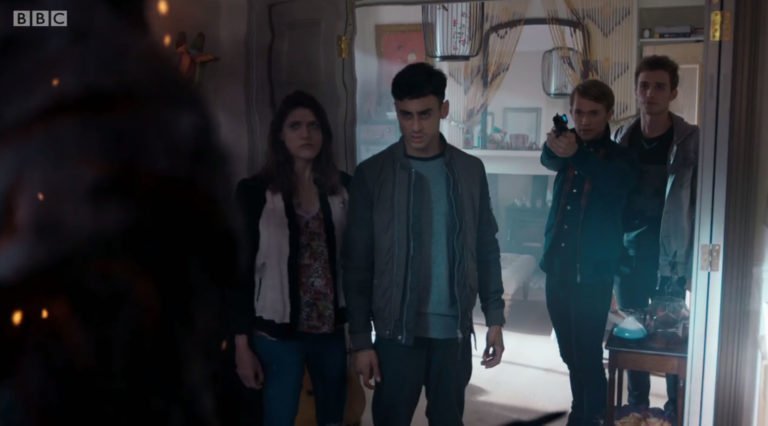 As April explains, "He's put a shadow on your heart", which is unintentionally hilarious moment number three.

Speaking of numbers, Corakinus tells them that Matteusz is Number 5 (was writer/creator Patrick Ness inspired by the young adult series I Am Number Four?), as Numbers One and Two were already done in.  If it were up to me, Matteusz would have gone straight to Number One, but again I digress.

It's by now that Tanya, Miss Quill, and later on Ram and I think even April by the end all push Bonnie Prince Charlie to use the Cabinet of Souls and eliminate the Shadow Kin, who are slowly entering Earth through tiny cracks in time and space.  Charlie, being a.) moralistic and b.) more concerned about what his boyfriend thinks than on saving humanity, continues to refuse.  Instead, he and Matteusz (because Matty insists on being at Charlie's side at all times) go to the Headmistress, Dorothea Ames (Pooky Quesnel).  Dorothea insists that the Governors are academics, interested in research to gather knowledge for "The Arrival".  They, she tells our lovers, manage time.

As is the case throughout all Class, Charlie generally proves inept at things.  It's up to Quill to save Numbers 3 and 4: Tanya's brothers, though it's hard to say if they were of legal age (doubtful since they're also going to Coal Hill Academy), and/or whether or not they are twins (having both of them wear shirts that are similar shades of orange does not help matters).

It all comes to a head at the assembly area, where Quill and Tanya are fighting furiously to stop the invasion.  Corakinus' pledge that the Earth will be spared if she comes with him is a lie: he plans to kill everyone.  Ram returns to join the fight when he sees the shadows are going after people, and at long last, Charlie uses the Cabinet of Souls that Tanya & Quill brought to defeat the Shadow Kin.

To his intense disappointment, Charlie finds that he is not the hero of legend, for the Rhodian souls have not returned to take forms again.  Dorothea is a terrible disappointment and will not see "The Arrival" and is killed by...a Weeping Angel!

April appears dead, but to everyone's surprise, Corakinus rises, speaking in April's voice and asking why is everyone looking at her like that. 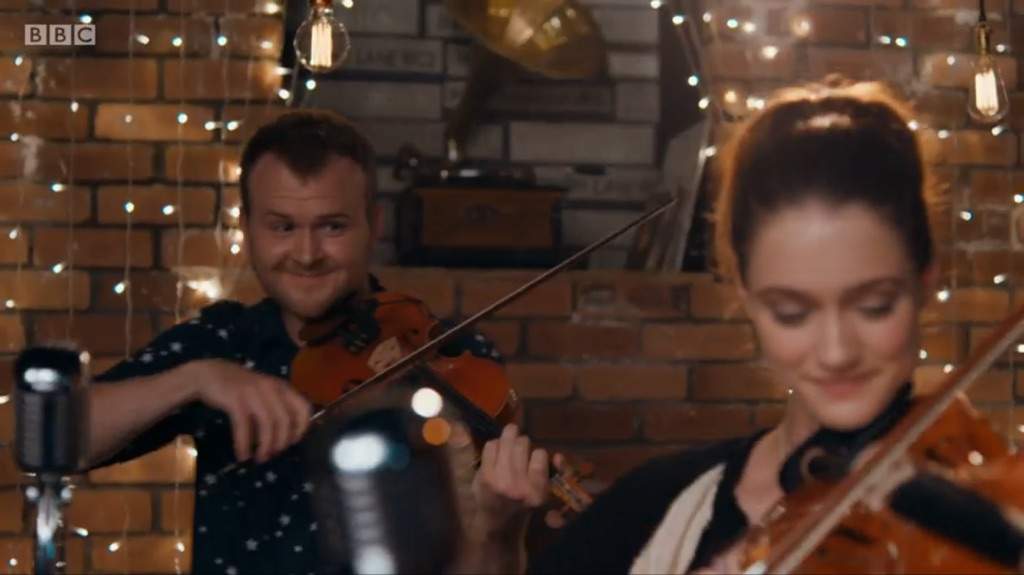 I guess this means that April and Ram may find Coitus Corakinus a bit difficult.

As always, The Lost shows that Class made a terrible, terrible mistake by making Charlie the main character because Katherine Kelly so dominated the show as Miss Quill.  She was the only actress and only character worth our time and interest.  Her pregnancy makes things quite curious in that if her children live up to the Quill manner of being, they will literally eat her.

Maybe if that's the case, we were lucky not to get a Series Two.

Whether attempting to be tender, almost motherly to the devastated Tanya or delighting in the idea of smacking Bonnie Prince Charlie around (There's some Princes I'd really like to start punching," she tells Tanya when they plan to force Charlie to use the Cabinet of Souls), or stating the obvious (when Corakinus bemoans his defeat of him by Quill when she saved Tanya's brothers by telling her, "You will die," she replies, "All of us die, genius"), Kelly as Quill has been nothing short of brilliant.

Why she ended up playing second fiddle to this motley group of models defies belief.

I simply cannot understand how any of the young adult cast-members save Hopkins can have careers if they don't get more acting training.  Elsayed is especially ghastly whenever he tries for any kind of emotion: whether it's him trying to show devastating grief ("What do I SAY?!", he asks April in how to explain his dad's death to him mom, whom we've never seen) or anger at any of them for not attempting to fight (as a side note, did anyone bother trying to get in touch with UNIT or maybe even Torchwood?). He's even bad at trying to declare his undying love for April, whom he told not that long ago he wasn't in love with (despite taking her virginity) because he'd known her for only a month.  Now we're supposed to believe he loves her passionately?

Oparah too showed she has limited range: her tears at seeing her mother sliced were unconvincing.

The Lost also vindicated by view that Matteusz served no purpose in Class apart from being Charlie's top.  Throughout all of Class he never did anything outside of Charlie (no pun intended), and Renzo either was directed to make Matteusz incredibly dim or that was how the character was meant to be.

Dim was also how Austin's Charlie was.  He kept to that 'alien who does not understand things' bit by looking confused when April gives him a comforting hug (even Quill caught on to that particular human need faster, and she has no genuine love in her).  He comes across as weak and almost self-righteous in his stubborn refusal to use the Cabinet, and worse, it looks like he didn't want to use it...because it would make his boyfriend cry.

Something that The Lost perhaps might not have thought out well is that now, Charlie is pretty useless.  The Governors' sole reason for their interest is that he had this one-time-only Doomsday Device.  Well, now it's used, and if there had been Class Series Two, what cards could an exiled Prince with no guard and no weapon use?  Further, why would the Weeping Angels even care?

It was such a waste that the Governors didn't end up being a group of renegade Time Lords.  At least that would have been a genuine shocking twist ending.  However, given that the Weeping Angels were created by Class executive producer Steven Moffat, it was decided to use something to please Moffat's ego (and give him copyright compensation).  I see no other reason to have the Weeping Angels be the big baddies in the end.

The Lost lived up to its name.  Bad acting save for Kelly and Hopkins, a rushed, even chaotic story where it looked desperate to end one set of stories and tease others that will never come outside fanfic, many hilarious moments all made The Lost something to not remember.

It would have been better if the villains turned out to be not the Weeping Angels but The Silence...at least they'd make us forget we ever saw any of Class.