What we learn in Nightvisiting, Episode Three of Class, is that Miss Quill had a sister and that Bonnie Prince Charlie is a bottom.

We also see that perhaps my concerns about Matteusz, our gay Polish immigrant, are coming closer to being true: that his purpose in Class is to be nothing more than Charlie's sexmate, with no reason for being other than to be Charlie's whore.

On the second anniversary of her father's death, Tanya (Vivian Oparah) is visited by the 'ghost' of her father, Jasper (Kobna Holdbrook-Smith).  'Ghost' is a bit wrong, since in reality Jasper has a pretty solid physical presence.  He also has a large vine attached to his back.

Jasper beckons his daughter, nicknamed 'Puddle' to join him in taking his hand.  While she is unsure, another night visitor is making a claim of her own.  Miss Quill (Katherine Kelly) is similarly visited by her 'sister' Orla'ath (Anastasia Hillie).  Unlike Tanya, Quill is extremely dubious of this appearance.  Both debate their 'ghosts' to find if they are actually who they claim they are.

For their part, Ram (Fady Elsayed) is visited by his non-speaking ex-girlfriend Rachel, and this is seen via Skype by April (Sophie Hopkins).  Ram and April join forces to find out what is going on, tracing things back to Coal Hill, where one giant branch has spread vines all across London from this location.

For their part, Charlie (Greg Austin) and Matteusz (Jordan Renzo) are frankly too busy screwing to care or even notice the otherworldly goings-on.  Matteusz has been kicked out of his home by his Polish parents, apparently upset that he likes boys.  Quicker than you can say 'representation', Charlie and Matteusz start having sex, more than once from the looks of it, and surprisingly explicit: we see Matteusz thrusting himself into Charlie from behind, the looks of ecstasy showing just how much they are into their pleasures of the flesh.

The only time they seem aware of anything outside their hot, taut, toned, nubile, limber bodies is when after their second erotic encounter (at least) Charlie sees faint visions of his parents appear before him, leading his mistress to ask "Do you often see your parents after sex?"  Once they come down after coming on each other they find Quill and her sister.  Quill manages to knock Orla'ath down and subdue it, where she finds that the Lan Kin, the creature the vision claims finds souls and brings them together, is nothing other than a chameleon to entice other creatures which to feed off of.

On their own, Ram and April go to Tanya's home, where the main vine leads.  April has already mentioned she loves folk music in spite of her father, a folk musician who nearly killed them deliberately by driving off the road while drunk, paralyzing her mother.  April has also kissed Ram unexpectedly.  For their part, Quill and Mattlie have gone to Tanya's, where the lovers try to cut the ties that bind.  Quill has the perfect solution: run a double-decker bus to cut the cords, and with that, the Lan Kin return from whence they came.  The humans it was feeding on are restored without memory of anything, and Quill slips off, to find another gun she can use. 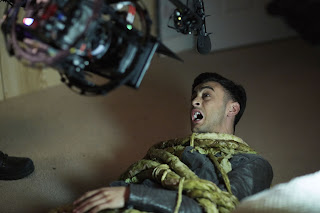 Nightvisiting has some good ideas rattling about when it comes to grief, loss, and letting go.  It's a pity that this territory has been covered several times on Doctor Who: Father's Day, The Unquiet Dead, Army of Ghosts/Doomsday, School Reunion, Knock Knock, and The Lie of the Land all involved letting go of the dead, most of them being parents save for The Unquiet Dead and School Reunion, which was where Sarah Jane Smith made an eloquent speech about how life means loss and pain.

Moreover, Nightvisiting is trying to be too smart for its own good.  The opening line to this review is a direct quote from Quill to Matteusz, who has shown up for some reason.  We learn he got thrown out, but why exactly Matteusz thought to go to the home of the boy he went to Prom with (and whom we haven't seen communicate with) is a puzzle.  They shared one kiss, and from that now we have them having surprisingly graphic happy anal sex.  I imagine that people have seen more graphic gay sex on television, but given their relationship has been barely touched on, I'm genuinely surprised they would go at each other so quickly.

It is interesting in Nightvisiting that Charlie and Matteusz could have been wholly written out of the episode altogether, as they did nothing in it apart from enjoy the pleasures of each other's company.  Matteusz in particular seems to be such a blank character, serving only to fulfill Charlie's requisite 'representation'.  He has no personality, and is shockingly stupid.

"Do you often see your parents after sex?"  That's coming after Matteusz accepts Charlie's story that he is an alien prince without batting an eye.  "You are still you with all your strangeness," the Pole tells the Rhodian prince.  It's more than strangeness, dear Matty.  It's another species masquerading as human.

Even in the bonkers world of Class, you'd think anyone would wonder if either Matteusz or Charlie are playing with a full deck.  I suppose such things go out the window if you're hot enough.

Speaking of kisses, what motivated April to kiss Ram (apart from him being hot too)?  They haven't had many conversations, and more often than not, they talk via Skype (an element of Class that I find quite curious).  What has April suddenly going gaga over Ram?

A lot of Nightvisiting is unintentionally hilarious and repetitious.  Orla'ath tells her sister that they have to stay attached to "the Great Trunk", making me wonder whether it was related to The Great Pumpkin.  We have the Lan Kin, a couple episodes after dealing with The Shadow Kin.  Is writer Patrick Ness a bit obsessed over 'kin'?

Ness puts in comedy in Nightvisiting, and sometimes it actually works.  "I've heard more about folk music in the past half an hour than in my entire previous life," a frustrated Ram tells April.  That was actually a funny line.  Most of the successful humor comes from Kelly, who is simply the best thing in Class.

Whether it's telling off Charlie ("You've decided to come down from your love nest", she tells the boys) or enduring Charlie's refusal to bring knives as requested because as he says, 'I don't like knives' down to both trashing the false sister ("Such a drama queen", she remarks when its destroyed) to sticking up for her sister's honor ("No one will dishonor my sister by making her nice"), Kelly rattles off the quips with the right mixture of sincerity and humor.

Both Oparah and Elsayed are shockingly bad in their performances.  Oparah is blank as she sees her late father, treating this appearance as almost a bother rather than a chance for closure.  Not once did it look like she and Jasper even knew who they were, let alone were close.  What is supposed to be suspicion and doubt come across as disinterest, or maybe cynicism about everything going on.  Elsayed still struggles with looking genuinely shocked by things, as if he isn't taking the premise seriously.  His delivery of the lines "The world's ending.  The dead have come back to life," is especially cringe-worthy.  Hopkins did better when delivering her monologue about her troubled father, so I give her that.

I also question Tanya's intelligence.  If or when a creature who looks like my late dad attached to a vine tells me that by taking hold of him, I become 'free' of anything (in this case pain, worry, grief that haunts me), even I would run from this strange statement.

As a side note, while we see why The Great Trunk targeted Tanya, what about any of those people who were either asleep when the faux-ghosts came calling, or actually fled in terror if they were actually awake?

Finally, Ness and Nightvisiting are simply too aware of things.  After the humans are restored, Quill remarks that none of them remember anything, adding "which seems really convenient".  It's almost as if Ness is mocking the 'wiped memory' trope in science-fiction.  It's deadly to draw attention to tropes if you are in them.

Nightvisiting was not the saving grace Class needs.  We see Kelly's Miss Quill is the only real interesting character on the show.  Apart from that and some gay teen sex (another form of 'night visiting'?), Class still struggles with weak performances and uninteresting characters, situations and monsters.

When it comes to Class, it does not know whether it is alien invasion or teen angst.

Next Episode: Co-Owner of a Lonely Heart
Posted by Rick at 10:51 AM