Requiem for a Heavyweight: The Television Adaptation 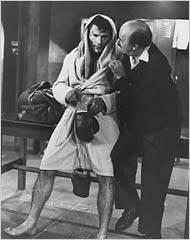 REQUIEM FOR A HEAVYWEIGHT

Requiem for a Heavyweight is a deeply moving television play, showing Rod Serling to be not just a master of the craft of television writing, but also curiously enough someone who could give audiences a sense of hope among the sad and lonely.  When one thinks of Serling, one thinks of The Twilight Show, with its twist endings and sometimes macabre, almost always downbeat endings.  Requiem for a Heavyweight astounds the viewer, not just with Serling's writing, but with performances by the cast, three of whom may surprise you with their range.

Harlan 'Mountain' McClintock (Jack Palance) is a boxer at the end of his fighting days.  The doctor refuses to certify him for more bouts, telling Mountain's manager Maish (Keenan Wynn) and his cut-man Army (Ed Wynn, Keenan's real-life father) that Mountain is finished.  Another bout and he'll go blind.

Mountain is a good, sweet palooka, devoted to Maish and Army, and a clean fighter.  "I wasn't no good," Mountain says, "but I never took a dive".  The fact he never fought crooked or did anything he was ashamed of is a point of pride for Mountain, who knows he's at the end of his career but uncertain what to do next. 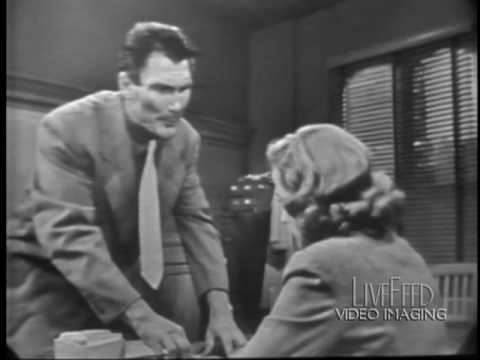 Maish, however, has a secret: he bet against Mountain to fall in the third round, but Mountain held on to the seventh.  That bet is now being collected by the Mob, but Maish ain't got that kind of dough.  Army hasn't got it either, and he's more concerned with helping Mountain find a new line of work.  For that, they go to the employment agency, and there Mountain meets social worker Grace Carney (Kim Hunter).  She sees the good man behind the odd-looking man, and soon tracks him down to suggest he work with children, training them in sports.

The two become smitten with each other.

Maish, for his part, now has hit upon a great idea: transferring Mountain from boxing to wrestling, where he'll have Mountain become a caricature of a 'Mountaineer', drawing on McClintock's Tennessee roots and be a side show.  Army is appalled and horrified, begging Maish to leave Mountain with the one thing he has left: his dignity.

It's a sign of how much Mountain loves Maish that he is actually willing to do it, but when on the night he sees his hillbilly costume and fully realizes the humiliation he'll be put through and the predetermined winner of these wrestling matches, he simply can't do it.  Maish angrily reveals he bet against Mountain, breaking the big and sweet boxer's heart.  Mountain punches Army when Army tries to calm him down, horrifying Mountain.  Rather than collect their money, the Mob brings another young, eager, hungry fighter to Maish and Army to train.

Army, through Grace, gives Mountain a ticket back to Tennessee, and on the train Mountain bonds with a little boy who recognizes he's a boxer.  Mountain soon starts showing this little boy the ropes, and with that, we end.

Requiem for a Heavyweight is a well-crafted piece for Playhouse 90.  Right from the opening, when we see Mountain's poster advertising the fight, we know he lost, and those losses keep building.  Serling's script lets things build slowly and drops information that will become relevant later.

For example, when Grace goes to the bar where old boxers come to reminisce, Mountain tells us that Maish refers to it as 'the graveyard', essentially where old, washed-up boxers go to die.  Later on, Mountain finds himself slowly starting to join in the conversation, in essence going to the grave himself.

Mountain mentions that at least twice he never took a dive, so when he is basically asked to do so, we know what it will do to him.

We know the conflict before some of the other characters do: Maish needs the money and is willing to sell out the one person who genuinely loves him to get it, Army being caught in the middle and Mountain, sweet-but-dim fellow, unawares of what might befall him.

As a side note, at one point Mountain is telling Grace the story of another bout he had, against a fighter named Smiley Collins, who played the violin.  Was Serling taking a slight jab at Golden Boy?

Serling's script is enhanced by three surprisingly great performances.  Jack Palance is primarily remembered as a heavy, one who was menacing either in a highly threatening way (Shane, Sudden Fear) or for laughs (City Slickers).   In Requiem for a Heavyweight, Palance was extremely touching and moving as our sweet palooka who knows it's over for him, but who also knows as he tells Grace, he was 'almost the champion of the world'.  Palance adopted a higher, softer voice, and his body movements were more gentle and soft. 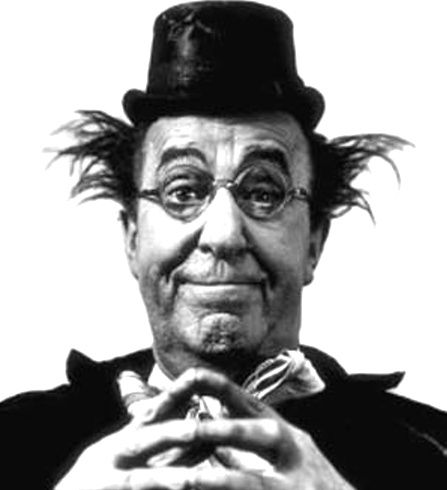 To 1950's audiences, it must have been Ed Wynn who was the most shocking revelation of all.  Best known as a comic with a distinctive look and high-pitched voice that made him more hilarious than heartwarming, Requiem for a Heavyweight was his first straight dramatic role.  Stories abound about how bad he was in rehearsals, to where he would resort to shtick if he forgot a line.

The final product shows Ed Wynn to be perfectly capable of playing things straight, with no hints that he wasn't anything other than a serious, dramatic actor.  Yes, you can still hear Wynn's distinct voice come across from time to time, but that's just his voice and there wasn't anything he could do to change it.  Ed Wynn's version of Army is that of a good man, who genuinely cares about Mountain.

About the only real negative thing one could say is that the punch Mountain throws to Army isn't convincing, but let's be realistic in that it was never going to be a real punch on live television.  Still, Ed Wynn showed himself to be highly capable, competent, and moving in this dramatic turn.

The final surprise is Ed Wynn's son Keenan.  Keenan had already established himself as an actor, and apparently a dramatic one (though the only Keenan Wynn performances I can remember are in lighter fare: as the drunk in The Clock and in a comedy routine in Ziegfeld Follies, where he was quite adept at a slow burn).  Keenan's aggressive, slightly conflicted Maish is a strong performance.

All three work so well together, and a credit to director Ralph Nelson in drawing great acting out of them.  Near the end, when Mountain learns about Maish betting against them when Maish blurts it out, it genuinely hurts.

Finally, not forgetting Kim Hunter, a staple of early television.  She makes Grace into a woman who makes her concern for Mountain sincere without being simplistic.  She has a hard task as the only woman in Requiem for a Heavyweight, but she commands the screen with yes, a grace and sincerity.  She starts out as almost bored with another man with few prospects, but in their first meeting we see that she recognizes the good man behind the cauliflower ears.

We can see little bits of early live television: the obviously fake fight, the wobbly sets (in the beginning as Mountain is carried off, the 'walls' move), and the odd bits with dialogue (near the end, the mother tells Mountain, "I hope he's not boring-bothering you", as if she quickly corrected herself).  Little bits, but none of that takes away from the beauty, grace, and sadness of Requiem for a Heavyweight.

Sadness up to a point, as at least we have a slight glimmer of hope that Mountain will indeed work with children.  Sadness comes for Maish, who now will take another fighter under his wing, and who knows if he will get his own requiem.