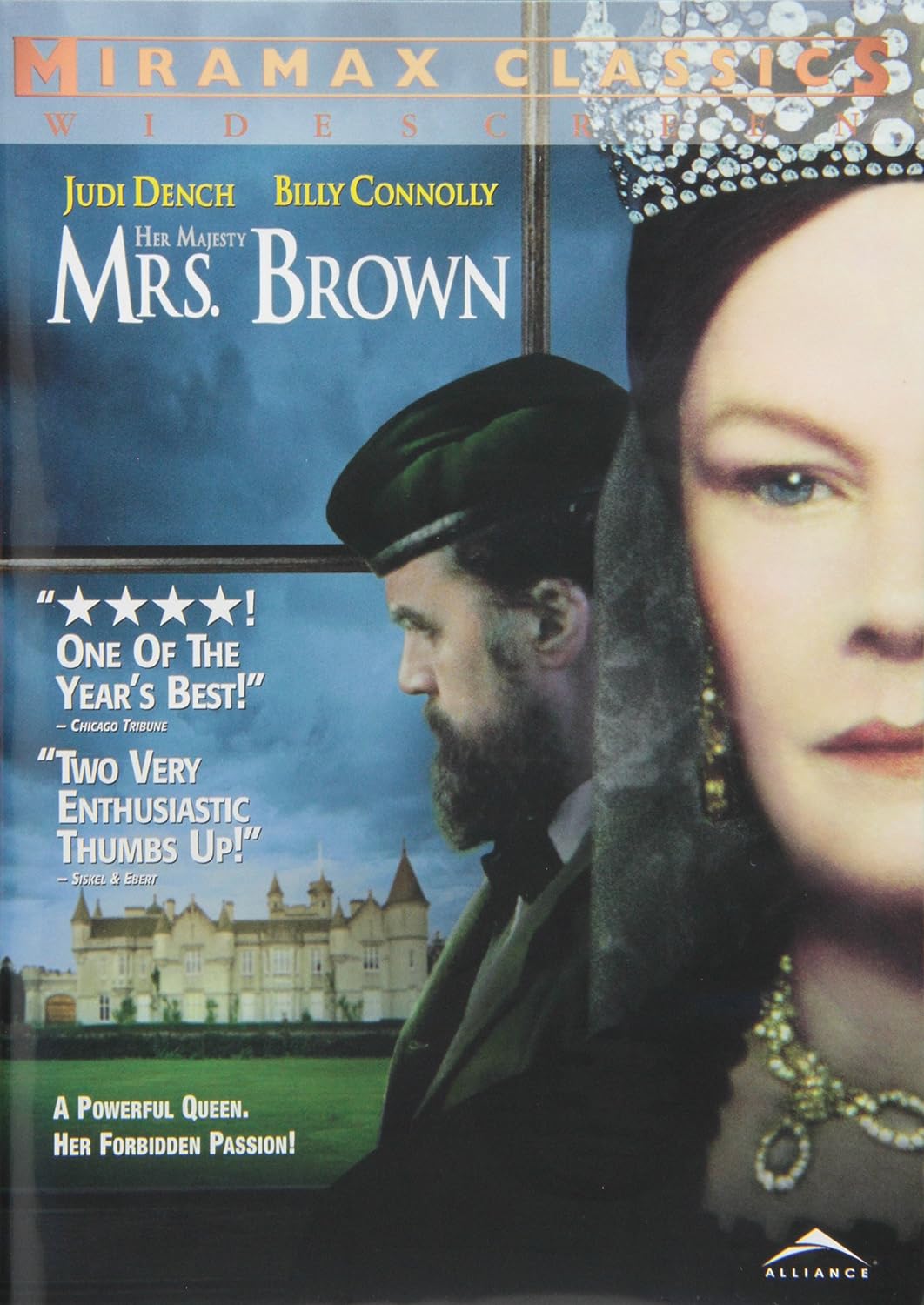 After seeing Victoria & Abdul, I thought it might be good to go back and look at our first adventure into the private (and perhaps romantic) life of our good Queen Vicky.  Mrs. Brown (also known as Her Majesty Mrs. Brown) is the story of Queen Victoria's relationship with one John Brown, one of her Scottish servants with whom she grew close to.  I do remember watching Mrs. Brown years before, but to be truthful I don't remember any of it.  It is now time to revisit this tale, especially in light of the popularity of its unofficial sequel, Victoria & Abdul.  Mrs. Brown is a strong dramatic piece and a showcase for both its stars.

It has been three years since Her Majesty Queen Victoria (Judi Dench) has become a widow, having lost her beloved husband Prince Albert.  Her Majesty is still in deep mourning, secluding herself in the Isle of Wight while state matters are if not ignored at least put on the backburner.  It is thought that seeing one of her late husband's loyal servants, Scottish Highlander John Brown (Billy Connolly) might do her some good, to see someone who reminds her of happier times.

If the Court thought that John Brown was going to be like them, they obviously were unaware of our blunt Highlander.  He is deferential to Her Majesty, but not in awe of her, let alone afraid.  At their first formal presentation, he speaks only when spoken to, but then breaks protocol by telling her he cannot believe she is such a state of mourning.  Everyone is shocked, and the Queen, visibly upset by having her grief spoken of so openly, orders him out of her presence.

John is warned about things by his brother Archie (Gerard Butler in his film debut), but the proud Scotsman will not be denied.  He awaits the Queen to go riding, and at last she gives in.  As time goes by, Her Majesty begins to actually turn to Brown to run things and to be her loyal companion, even friend.  The Court continues to be shocked by their relationship, and the press soon starts calling Her Majesty 'Mrs. Brown'.

As far as Prime Minister Benjamin Disraeli (Antony Sher) is concerned, the Queen can stay up in Wight or Balmoral, her Scottish home, so long as he is in charge of government.  However, by 1867, three years into the blunt Scotsman's reign, republicanism begins to threaten both Disraeli and the House of Saxe-Coburg-Gotha.  It is time for Victoria to reemerge to public life, but she doesn't want to.  Moreover, John Brown agrees with her, fearing for her safety both physical and emotional.

The Court, particularly her private secretary Henry Ponsbonby (Geoffrey Palmer) and the Prince of Wales (David Westhead) are very much anti-Brown.  They detest his imperious ways and sway over the monarch and wish him gone.  Disraeli, on the other hand, shows himself the shrewd operator that he is.  Rather than take up their elitist outrage, he begins to use his charms and manners to win both the Queen and especially Brown over to his side and bring The Queen out of seclusion.  Brown finally pushes the Queen to leave her grief, but she sees this as an act of betrayal.

It is only when the Prince of Wales becomes deathly ill with typhoid fever, the same disease that killed her beloved Prince Albert, that she begins emerging and appears to her public, starting with a Thanksgiving Service for his recovery.  While Brown continues in Her Majesty's employ, they are not as close as they once were, and even the staff has begun mocking Brown to his face.

Brown, however, has developed pneumonia after going outside to pursue potential assassins.  The Queen goes to the dying Brown and have a reconciliation.  Once he's dead, we learn that the bust of Brown the Queen commissioned was tossed off the roof by the Prince of Wales, and John Brown's diary was never found...though in the film, it was last seen in the possession of Sir Henry.

Mrs. Brown never sensationalizes the relationship between Brown and Victoria.  We don't get any suggestion that they were lovers and only very few, fleeting suggestions that either was even potentially in love with the other.  Those suggestions come from how Victoria on occasion looked at Brown, but those glimpses may be more from how Her Majesty might have seen Brown as almost a variation of Prince Albert: a man to care for her, watch over her, and protect her, the woman, not the Sovereign.

Victoria says as much when she comments that Brown is essentially the last living bit of Albert she knows.  If one looks at it, Mrs. Brown is really the chronicle, not of a great passionate love affair, but a friendship, sometimes overprotective, sometimes curious, sometimes blunt to the point of rudeness, but a friendship nonetheless.

This is carried through by excellent performances from Dench and Connolly.  Dench became an 'overnight' sensation as Queen Victoria, and her performance is a true piece of beauty.  Victoria is at times imperious and even majestic, but in Mrs. Brown, she is also a sad and lonely figure.  A great highlight is when she sees her Confessor, and she attempts to verbalize the struggle she has between being loyal to the memory of Albert while still feeling joy at Brown's presence.  This is something that truly troubles her, and knowing that she can love her memories while also appreciating those who are living brings great comfort. 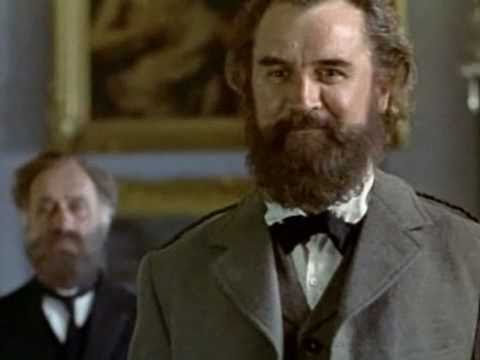 As much as Dench has been lionized for her performance, as well she should be, I'm surprised more praise hasn't been given to Connolly's John Brown.  We never really get an idea of what Brown's mind is.  He is loyal to the Queen, deferential, and respectful.  He also, however, is arrogant, bullying, in his own way imperious, and more than willing to attack even the Prince of Wales if it means protecting Her Majesty.

He's no fool: he goes when told it is the Queen's request; he also does what no one else does: treat her like a person.  Still, when you hear him say that he will have no problem changing the Queen's mind when it comes to something, when he is free to address her as 'woman' and when he essentially upsets the chain of command among the staff as it suits him, he comes across as almost unlikable.  Connelly's performance balances Brown's fierce loyalty with just a hint of self-service.

Credit should also go to Sher as the wily Disraeli, a Tory who knows when, who and how much to push to get his own aims done.  Whether it is dismissing the idea of working to get the Queen back to London or finding himself enduring the harsh Highlands to get a measure of Brown before trying to win him over, we see how well Sher does.  It's almost a shame no one bothered to make a Disraeli biopic, or at least remake one the one we have with Sher in the lead role.

In his debut, Butler showed himself an actor as Brown's brother Archie, one who insists The Queen is not his real friend but a convenience.  It's a shame to see Butler, younger and thinner, showing promise as an actor only to know that he will devolve into a burlier pseudo-action star in schlock like Geostorm and 300.

Director John Madden keeps thing going smoothly, hinting at things without going all-in on them (such as whether or not Victoria did ever succumb to temptations of the pleasures of the flesh or whether Brown had designs of his own).  The film never says their relationship was romantic or sexual, but instead one built on mutual affection.

It isn't perfect: Madden could have made the break between Vicky and Johnnie stronger, and this was a rare weak point in the film.  However, the performances make these two figures of history truly come alive, painting a gentle portrait of this most curious of couples.

Whether Queen Victoria and John Brown were ever lovers or in love we will never know, and Mrs. Brown does not bother attempting to answer it.  Instead, Mrs. Brown is about a woman who loved deeply and the man who helped her slowly learn to live again.