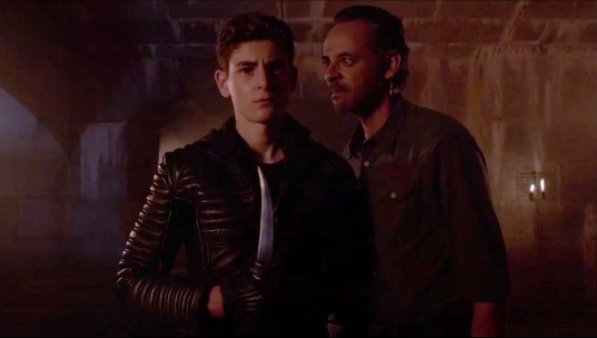 As I am unfamiliar with the Batman mythos, the character Solomon Grundy is unknown to me.  As I watched The Blade's Path, I thought he was hilarious, almost parody.  It isn't as if there weren't good things in The Blade's Path.  It however felt a bit like parody in more ways than one.

The former Butch Gilzean, shot in the head by Barbara Kean, has been dumped in Slaughter Swamp, where thanks to a little Indian Hill voodoo, he has emerged as the love child of The Hulk and Swamp Thing.  Not knowing who he is, he takes the name Solomon Grundy (Drew Powell) from a song that some hobos are playing on their phonograph.

Eventually, Solomon finds Edward Nygma (Cory Michael Smith), who is shocked to see him as he is now.  Nygma is still trying to get his super-mind back, but all that time frozen has made him an idiot deluxe.  He tries to rob a pharmacy to find drugs to help him, and is now so dumb he is taken in by a pharmacist's claim that there's a new drug sample that might help called 'Smartivia' (which must be Activia's sideline).   Nygma doesn't want anything to do with Grundy, despite his grunting pleas to be his best friend, until he finds that by using Grundy in fight club-type matches, he can make money.  That money of course will go to Nygma to get his powers back.

Meanwhile, Ra's al Ghoul (Alexander Siddig) is still waiting to be killed by Bruce Wayne (David Mazouz), the latter still torn over the death of teen Alex.  Bruce obliges, breaking into the prison and responding to Ra's taunts by stabbing him with the dagger.  Is Ra's dead?  Who's to say?  We learn that Detective Jim Gordon (Ben McKenzie) and Alfred Pennyworth (Sean Pertwee) are able to take down the guards at the prison, who are really Ra's servants, and that it was Ra's who brought back Bonkers Babs (Erin Richards), even giving her a little gift: some kind of power when their hands come close, though I figure that power will be revealed at a later date.

Penguin (Robin Lord Taylor) for his part is still trying to figure out what the game plan is from Sofia Falcone (Crystal Reed).  She gets him to go to lunch to show the Falcones are on his side (which was her original idea) and even goes out of her way to find Pengy's mother's old goulash recipe. She in a sense starts mothering him, and Pengy struggles to deal with all his emotions. There were, as I said, good things to be seen.  Of particular note is the Wayne/al Ghoul storyline.  Both Siddig and especially Mazouz continue to be impressive in their performances, the latter especially so.  As Bruce, torn by guilt and also by rage, the conflict between what he wants to do and what he does is well-acted.

Somehow, however, more of The Blade's Path struck me as either funny or almost a touch camp.  Powell's Solomon Grundy can't seem to escape the 'Frankenstein' manner to him to where I wonder if his character and interpretation of it is meant to evoke Shelley's iconic figure.

This is also a rare moment when I think CMS' version of Nygma seemed a bit rushed and slightly unbelievable.  I cut him some slack in thinking that perhaps Nygma's addled mind made him rush around and be almost goofy in every situation, but somehow it felt a little hard to accept.

Same goes for RLT's almost wild and out-of-control Pengy.  It seems slightly comical for him to ask about Item 4 on his To-Do List, Kill Sofia Falcone, in front of Sofia Falcone, adding that he is placing a question mark next to it.  We know Sofia is playing a long game with Pengy: no one would go through so much trouble to find his beloved mother's goulash recipe without some ulterior motive.

As a side note, I forget that despite his upper-crust name, Oswald Chesterfield Cobblepot, formerly Kapelput, is half-Hungarian.

Not that RLT gave a bad performance: his line reading to Sofia, "Perhaps you overestimate the pleasure of your company" was sharp and witty.  Reed too does well as Sofia, whom we know is up to something but still manages to make Pengy question himself.  As he struggles with an ankle, she coos a story about her own mother, offering to Penguin, "What's needed is warmth," the double meaning of this clear.

For me, the funniest part was Thompkins' revelation.  It was almost a 'we gotta use Lee in this somehow, so let's stick her here', and despite how The Blade's Path wanted it you pretty much could figure out who 'Doc' was. 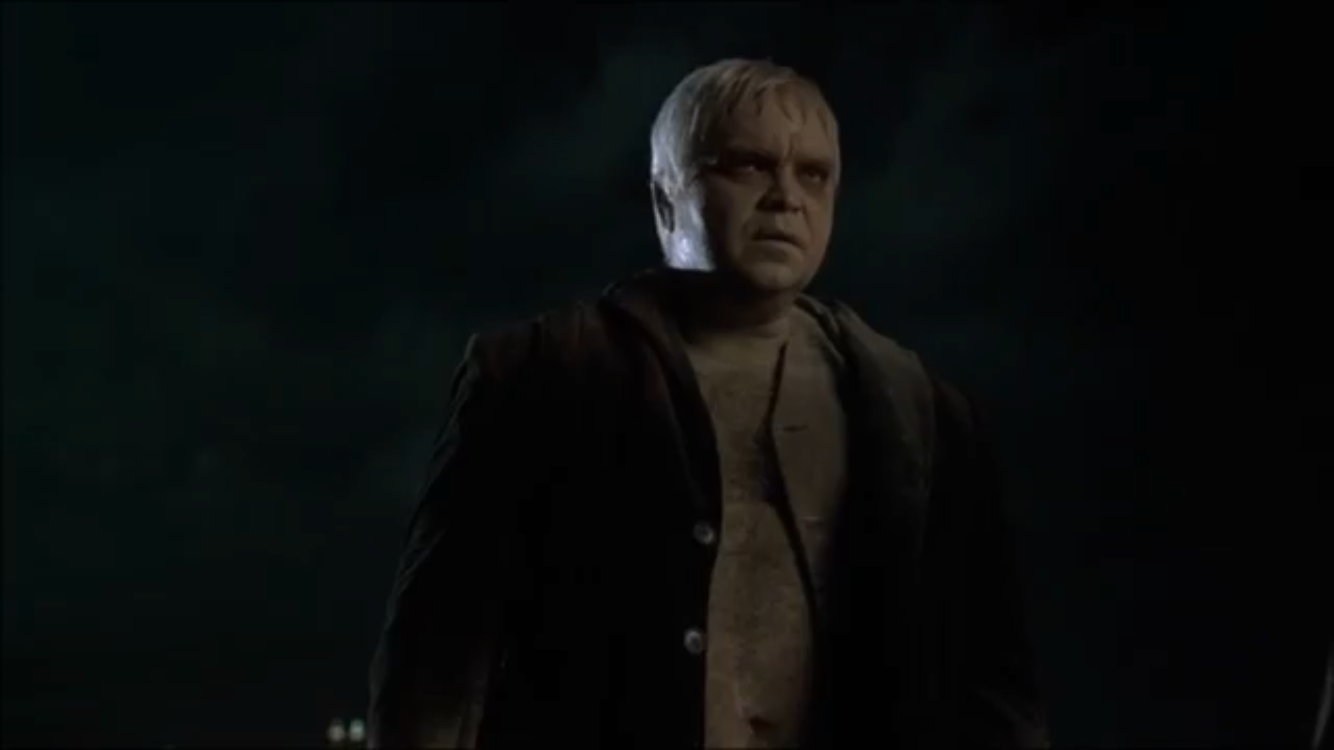 With regards to that, I do cut some slack to them in that that's how the characters are.  However, it just seems slightly off to me.

The Blade's Path isn't terrible.  It has good performances and moves some stories forward.  It just wasn't one that I would want to revisit.

Next Episode: Hog Day Afternoon
Posted by Rick at 8:17 PM