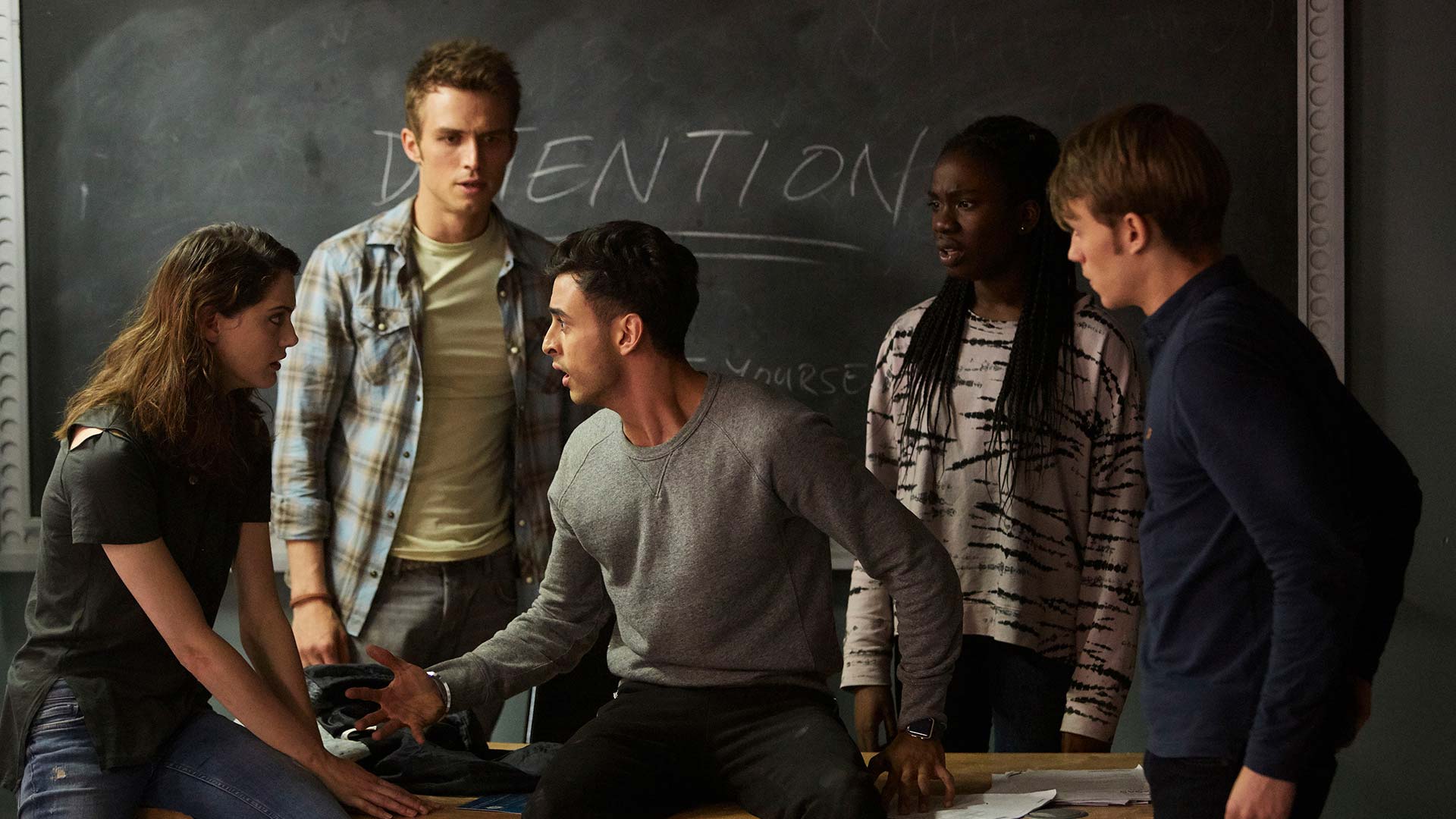 We've confirmed the sad truth about Class, the young-adult Doctor Who spinoff, with its sixth episode, Detained.

No, I'm going to walk that back.

Detained is the first Class episode fully focused on our teen characters (all played by people who run from 19 to 25).  Apart from the beginning and a very intriguing end, Miss Quill (Katherine Kelly) does not appear in Detained.  As such, you would think that having a teen-focused episode on a teen-focused show would be the breakout Class so desperately needed.

It wasn't.  Instead, it was a reminder that the characters are uninteresting, the situations dull, the actors generally weak, and that in some ways, Class is almost a spoof, worthy more of mockery than fandom.

Miss Quill is using what little power she has over Bonnie Prince Charlie (Greg Austin) by putting him in detention.  As it so happens, everyone he knows is also in detention: Ram (Fady Elsayed), April (Sophie Hopkins), Tanya (Vivian Oparah), and Charlie's sexmate, Matteusz (Jordan Renzo).  She locks them all inside for detention while she attends 'other matters'.  Charlie, who is claustrophobic (something no one knew until now), begins panicking, but just as they manage to get the locked door open an asteroid crashes right through, causing them to be taken out of time and space.

Don't you just hate it when that happens?

As our Scooby-Doo gang begin investigating, things are traced to the asteroid (technically, the meteor as Ram, constantly dismissed as a dumb footballer, reminds them).  Matty picks it up in order to throw it out, but then something strange happens: he starts talking about the time he came out to his Grandmama back in Poland.

He also confesses that he is afraid of Charlie.

Detained pretty much follows this pattern: each of them picks up the Asteroid (Meteor) of Truth to a.) find out more about their situation and b.) offer up some memory and confession.  Tanya picks it up to find out more, learning that they are in a prison and that the rock contains a prisoner.  She also tells the others that they don't consider her a real friend because she is so much younger than them.

The Meteor of Truth not only compels them to tell the truth, but it also increases their aggression.  They are at each other's throats, constantly fighting and fighting to remain sane.  They find that they have been taken out of time and space, so in some respects they are not in danger.  However, they will be trapped there forever, so in some respects they are very much in danger.

Charlie starts confessing before picking up the rock, telling them how afraid he is of both losing Matteusz and hating him for holding him back from his desires for revenge, and how he does not have any friends apart from them and on his guilt about his lost world.  Now, with Meteor of Truth in hand, the rock has found someone guiltier than he in the rock and the rock is freed.  However, the rock still needs a prisoner, and that's Charlie.

Charlie is saved at the last minute by Quill, who now sports a scar on her left eye, longer hair and a gun.  How can this be if she's been gone only forty-five minutes and cannot fire a weapon?

Quill has news for Bonnie Prince Charlie: the creature that was inside Quill's head is now gone, so she is free.  Things are going to change. 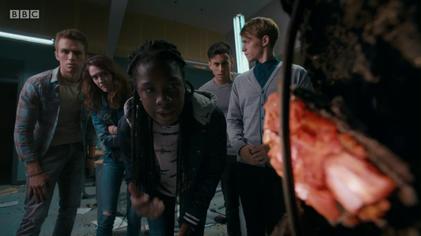 Detained has received much critical acclaim, with some calling it the best Class episode.  I want to believe those who say that are being sincere.

It's as if writer/creator Patrick Ness was throwing in the towel, showing us everything that is wrong with Class in one sitting.  If I didn't know better, I'd say Ness is pretty contemptuous of everything Class-related after watching Detained.

The whole episode is built on coincidence: that the Meteor of Truth would hit this precise spot at this precise time.  IF, say the Governors with whom Quill is working with orchestrated this, or if Quill herself had a hand in any of this, then it would have worked better.  Having this incident happen in the way it did when it did seems way too much of a stretch.

Detained showed the four students tasked by The Doctor from Doctor Who to be shockingly, embarrassingly stupid.

Granted, they were snapping at each other due to the Meteor of Truth (as a side note, that would be a great name for a band), but why did April snap at Ram for a perfectly good observation. Charlie tells them, "I've got friends," to their inquiry about whom he would call in an emergency.  Ram replies, "Besides us?", which leads April to try and hush him.  Why?  Ram's correct: Charlie has no friends, no one he can be intimate with, unless you count his sexmate, but that's another kind of intimacy.

Most of their barbs, however, showed the lot of them to be imbeciles.

When the room is rattled, Ram asks, 'What was that?' Matteusz responds with 'An earthquake?', leading Ram to reply, 'In London?!'
After they are swept out of time and space, Charlie looks into the void and asks 'Is detention always like this?'
When Matteusz is remembering when he was a child in Poland, coming out to Grandmama, he says, 'I'm in Poland', to which Ram replies, 'This is what Poland looks like?'
After Matteusz tries to comfort a panicking and upset Charlie, Matty begins telling him about a character from books he read to help his English, books given to him by his religious mother: the Narnia stories.  "Narnia?", Charlie asks.  "Is that in Canada?" 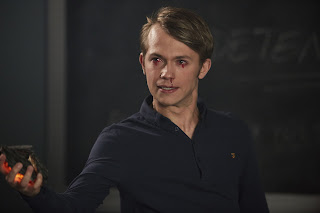 No wonder at one point, when she holds the Meteor of Truth, Tanya explodes at Charlie.  "Ask about what?" he says, and she snaps. "About the rock, Alien Boy! God, you keep saying how you're this PRINCE but all you do is stand around, asking stupid questions and getting obvious things wrong!".

That was pretty much my description of Charlie.  That and that he's a bottom.  Pretty much that's all there is to Charlie as a character.  When Charlie tells them, "You think I'm this Pampered Prince?" I replied, YES, YES, A THOUSAND TIMES YES!

Ram too tells the world what the world thinks of Matteusz.  "Who are you anyway?  Why you always hanging around with us?!"

Ness pretty much is using dialogue to state the obvious about characters: Tanya is insecure and a racist (at one point, she dismisses April's efforts at comfort with 'White People!', a term that no one else would have gotten away with save Ram), April doesn't love Ram, Ram (allegedly) deeply loves April, Charlie is both clueless and imperious, Matteusz does nothing on Class except serve as Charlie's mistress.

I'll give Matteusz one good point though.  Tanya in another tirade when people dare question her leadership snaps at our gay Polak, "Sometimes action isn't pretty you big Polish giraffe".  An unamused Matty replies, "That isn't even a logical insult".  What could have been a good moment for him, finally, was undone when he defended his height and neck as being perfectly proportional.

That frightful dialogue might be forgiven if it were well-performed, but by golly were the actors on Class determined to show they couldn't do much.  Austin's 'panic attacks' were comical, so was Elsayed's indignations and disbeliefs, Hopkins' shock, Oparah's anger, and Renzo's, well, everything.

The one moment, one, that saves Detained from being an absolute disaster is a series of close-up shots of our cast.  It was an effective, even eerie visual moment: almost frightening and intense, well-filmed.

Other than that, Detained was a disaster.  It shows all the weakness of Class and none of the virtues, those being Kelly as Quill.  The cast was asked to carry an episode by itself.  It failed, failed spectacularly.

What a total waste of detention.

Next Episode: The Metaphysical Engine, or What Quill Did
Posted by Rick at 11:55 AM