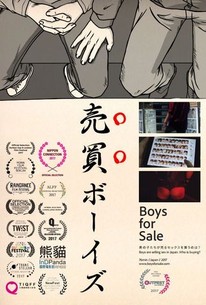 It reads like something from a gay porn video: a straight man who can be enticed to have sex with a man and under his own version of 'gay conversion therapy'.  'Gay for pay', the idea of heterosexual men having sex with homosexual men in exchange for money however, is not the exclusive domain of adult videos.  It is reality in the far East, specifically Japan.  Boys for Sale (Bai-Bai Boizu in Japanese) reveals a great deal about this demimonde that is both open and secret, simultaneously overt and opaque.  It reveals that hard financial times can make young men do just about anything to anyone with the yen.  It also reveals a universal truth: despite what pornography may show, the business of buying and selling sex can be a sad and lonely one, where the trade of physical pleasure may pay well but carries a high cost.

We learn through interviews with the 'boys', along with some of the club owners where the 'boys' are essentially rented out and others who have observed this world about Shinjuku 2-chome, the gay area of Tokyo. The term 'boys' is a wild misnomer, for most of the interviewees are between 19 to 26, with a 30-year-old and maybe a 17-year-old being the outliers, what would be known as 'twinks' in the gay subculture.  Japanese culture, prior to the opening to the West, was surprisingly more open and tolerant of homosexuality.  Now, with centuries of homogenization and conformity being the norm, anything that deviates from that norm, including homosexuality, is frowned upon.  Curiously enough, the Anti-Prostitution Law, which caused more shifts in Japanese society when it came to its views on sex, makes no mention of same-sex relationships and technically, men paying for sex with other men is not illegal.

These boys or 'urisen' talk about their experiences with homosexual encounters, some of them quite surprising.  More than a few tell the interviewers that they've had sex with men in their 80s.  As is the case with many 'escorts', the reason they fell into this business was financial.  Some, affected by the Fukushima earthquake and tsunami, others by large debts, opted to make money through letting other men, mostly closeted or who as one 'urisen' but it, 'are married men bored with their wives', use them. As we hear and see more from them, the tales that emerge become at times bizarre, at times almost humorous.  Not only do we learn that there are 80-year-old Japanese men still getting it on with 19-year-old boys, but that some of these men are into curious sexual turns: everything from your cursory S&M to defecating on them.  The lengths they go to so as to protect their identities are quite surprising: most not only wear masks but also have their eyes pixelated.  Only a couple appear sans masks, and one of those uses a false name.  There is still a great deal of shame at the art of hustling.

Moreover, there is tragedy and even danger in these stories. One talks about how essentially he was raped the first time he engaged in same-sex activity.  Another, the 18-year-old, was unsure about what an STD was or how one got one.  The ignorance about sexually transmitted diseases is almost shocking, but does explain why AIDS is growing in Japan versus in other industrialized countries where it is either shrinking or holding steady.  The owners of the Japanese versions of gay bars are little to no help.  One particularly blunt owner insists that the urisen go through training, which is contradicted by an actual urisen who says he was basically thrown into the deep end the first time.

Boys for Sale has several accompanying illustrations, some graphic, about the kinds of things they have to go through.

The film takes a cold, dispassionate view of the boys to men trade, one that has more dangerous than they seem to realize.  A former urisen-turned-bar owner says quite clearly that he's straight and that it was hard to get hard at first.  "Making money will get you hard," he remarks, acknowledging that in the end, these acts are not love or even lust but purely financial.  If there was another way to earn a living than turning tricks, it appears that not even the actual gay men would be in 'the profession'. They are not there against their will, but they are not there because they choose to be either. They are there because they need to live. 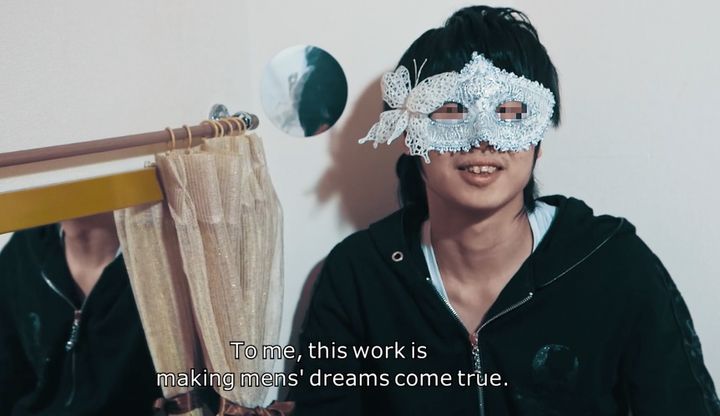 Boys for Sale makes clear that this is not some form of titillation or fun for them.  None of them are happy hookers.  Some of the urisen may actually derive some physical pleasure from their activities (even some of the straight ones), but for the most part their trade is one that keeps to the tradition of the female prostitutes that once held court in Shinjuku 2-chome.  We're told that the area was once where females plied the sex trade until the Tokyo Olympics when the city decided that such an open area would not look good.  The ladies of the night were driven out, but the seedy reputation remained, allowing another disparaged group (gays) to go there without worry to their own reputations.

In Shinjuku 2-chome, there is a temple where prostitute's corpses were left to rot, as if they were nothing. One observer remarks, 'it's such a sad place', and it looks like things have come full circle.  There is a certain sadness in these stories, stories of men who find that their only asset is their asses.  These are not the memoirs of gay geisha (especially since geisha are nowhere near required to have sex, let alone expected to for money).  They are stories of young men, some gay, some straight, some bisexual, who through various routes find themselves in situations they would not want to be in.

It is perhaps understandable given that they can get $5 for 30 minutes of drinking with a potential pickup.

Not only is Boys for Sale a look inside a private, secret world, but it is also a documentary that makes the viewer ask questions about whether legalized prostitution would make things better, the emotional toll on those paid to indulge others in the pleasures of the flesh, on the idea of being sexually out affects a society, and especially on the dangers of STDs in Japan.  A potentially growing health crisis in the Land of the Rising Sun will not only affect that nation, but may impact other nations.

There is great sadness in this variation of 'the floating world', and director/editor Itako brings it to light.  The illustrations and animation reveal things impossible to photograph.  One thing that is curious is that Itako never talked to any of the clients.  It would have been interesting to see things from the other perspective, though perhaps the Tale of the Urisen was what Itako was more interested in.

"This is a business where men pay to have sex with men.  It's not something we can talk about publicly," a bar owner explains.  Boys for Sale does, and perhaps there should be a more open discussion about the issues involved in Boys for Sale: the economic and social reasons behind this trade, the growing lack of knowledge that unprotected sex poses for this generation.  One of the urisen may think that he is 'making men's dreams come true', but those dreams may end up becoming nightmares.