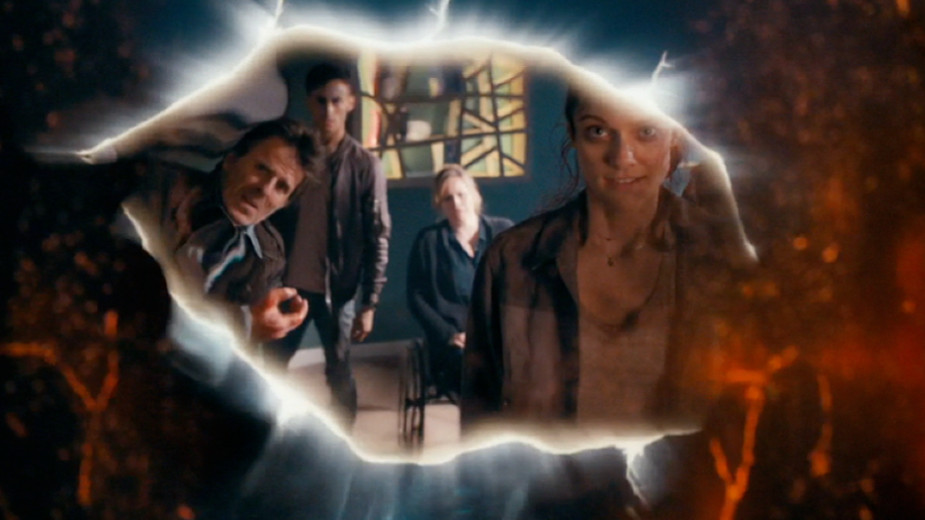 Of all the things that surprise me about Class, the Doctor Who young-adult spinoff, one at the top of the list is the nonchalant nature of parents.  Alien invasions, possession by otherworldly beasts, legs replaced by a time traveller...all things that the adults at Coal Hill Academy readily accept as perfectly normal.

Given that alien invasions are accepted but homosexuality isn't, one wonders exactly what kind of adults live within the Coal Hill area.

Brave-ish Heart again draws its name from other media, and once again the wild imbalance between the supernatural and the commonplace (as Miss Quill so aptly put it, 'alien invasion or teen angst') continues.  In some ways, it is surprising how good ideas (the Invasion of the Petals) are wasted for bad ideas (King April, Mistress of the Underneath).  Sometimes, you just wonder what possessed the BBC to try and peddle this as being good, let alone part of the so-called 'Whoniverse'.

Picking up where we left off last time, April (Sophie Hopkins) along with her sexmate Ram (Fady Elsayed) are in The Underneath, the realm of the Shadow Kin.  April is now determined to defeat the Shadow King by killing him.  Ram is there to help her, though there isn't much he can do.

Back on Earth, our Scooby-Doo gang has a task of its own: defeat The Invasion of the Petals.  These are not ordinary petals.  They are carnivorous and multiply with a single drop of blood.  Dorothea (Pooky Quesnel), the new Headmistress at Coal Hill, wants Miss Quill (Katherine Kelly) to help her convince Bonnie Prince Charlie (Greg Austin) to use the Cabinet of Souls against the Petals.  He steadfastly refuses to use this Doomsday Device. The moral dilemma grows in that if Quill wants him to use the Cabinet to destroy the Shadow Kin.

In Quill's view, it will be avenging both their people.  In Charlie's view, along with that of Charlie's mistress Matteusz (Jordan Renzo) it will make him a genocidal maniac. Dorothea really does not have any interest in all this: she wants the Cabinet used, and is willing to shoot Matteusz to do it.

As a side note, I'd be happy if Dorothea shot Matteusz: no reason needed, no questions asked. He just needs to go, preferably back to Poland.  #MakeBritainGreatAgain

Tanya (Vivian Oparah) gets Ram's father Varun (Aaron Neil) and explains everything as they race to Coal Hill, where April's parents are.  They soon become trapped as the petals start eating people.

April does battle with the Shadow Kin King Corakinus (Paul Marc Davis), and during the battle her connection with her mother Jackie (Shannon Murray) allow her to tear into space and time to send Ram back.  Instead, Mr. Singh and Huw (Con O'Neill), April's father, go into the Underneath to save their children.  April does defeat Corakinus but does not kill him, for she is good.  However, it's enough to have Corakinus lose his crown and April become their King (as monarchy is gender-neutral in The Underneath).

Who knew the Shadow Kin would be so 'woke'.

Charlie is compelled to use the Cabinet of Souls, but as to whether he will use them on the Shadow Kin or the Carnivorous Petals will never be answered.  As King April, she orders the Shadow Kin to devour the petals, saving everyone.  Quill is incensed that Bonnie Prince Charlie has put his own morality over avenging both their people.

All this in the end was basically an experiment.  Dorothea explains to an angry Quill that the petals were essentially one, so Charlie need have used just one soul to destroy them.  The mysterious Governors just wanted to see what Charlie and Quill would do.  However, true to her word, Dorothea tells Quill that since she helped them, they will help Quill by removing the creature that binds her to Charlie.  Dorothea also tells Quill she still has to go to Parent's Night, however.  April, no longer King, now helps the newly-healed Jackie start walking.

I should point out that all this, All This, ALL THIS, both Brave-ish and Co-Owner of a Lonely Heart, takes place in ONE day.

Losing your virginity to a guy you've known a month, fighting an alien overlord almost to the death, becoming King of the Underneath, and helping your formerly paralyzed mother walk again.

And she still has to go to Parent's Night!

Ah, to try and balance saving the universe with your love life.  Talk about 'hard choices'.

Brave-ish Heart wants things simultaneously played for laughs and played straight (and no, that wasn't a Matteusz/Charlie joke).  When they are in The Underneath, Ram snaps, "Fine, Frodo.  Let's go hope into the volcano," which leads to April's very puzzled "Frodo?".  "Yeah, it's from a movie my dad likes," Ram replies.

Far be it for me to say that kids nowadays have no attention span, but the last Lord of the Rings movie came out just fourteen years ago (the year Tanya would have been born).  Can it be possible that Generation Z has already forgotten this epic film series, even if the last of The Lord of the Rings prequels, The Hobbit: The Battle of the Five Armies, was only a mere three years ago?

How soon they forget...

That's for laughs, I guess.  Serious is the idea of Ram's and April's relationship, particularly when Ram defends Sikhism to April despite him not following some of its precepts.

You can't get more mix of silly and serious as when April is about to face off against Corakinus (which shouldn't really be all that hard given what a weak character he is: all bellowing and nothing more).

"Don't say that you love me," April warns her first-time lover.  "What?  I wasn't.  I've know you like a month," is Ram's deeply felt reply.

They've known each other for a month.  They haven't had that many conversations.  Yet they had sex less than maybe two hours ago. 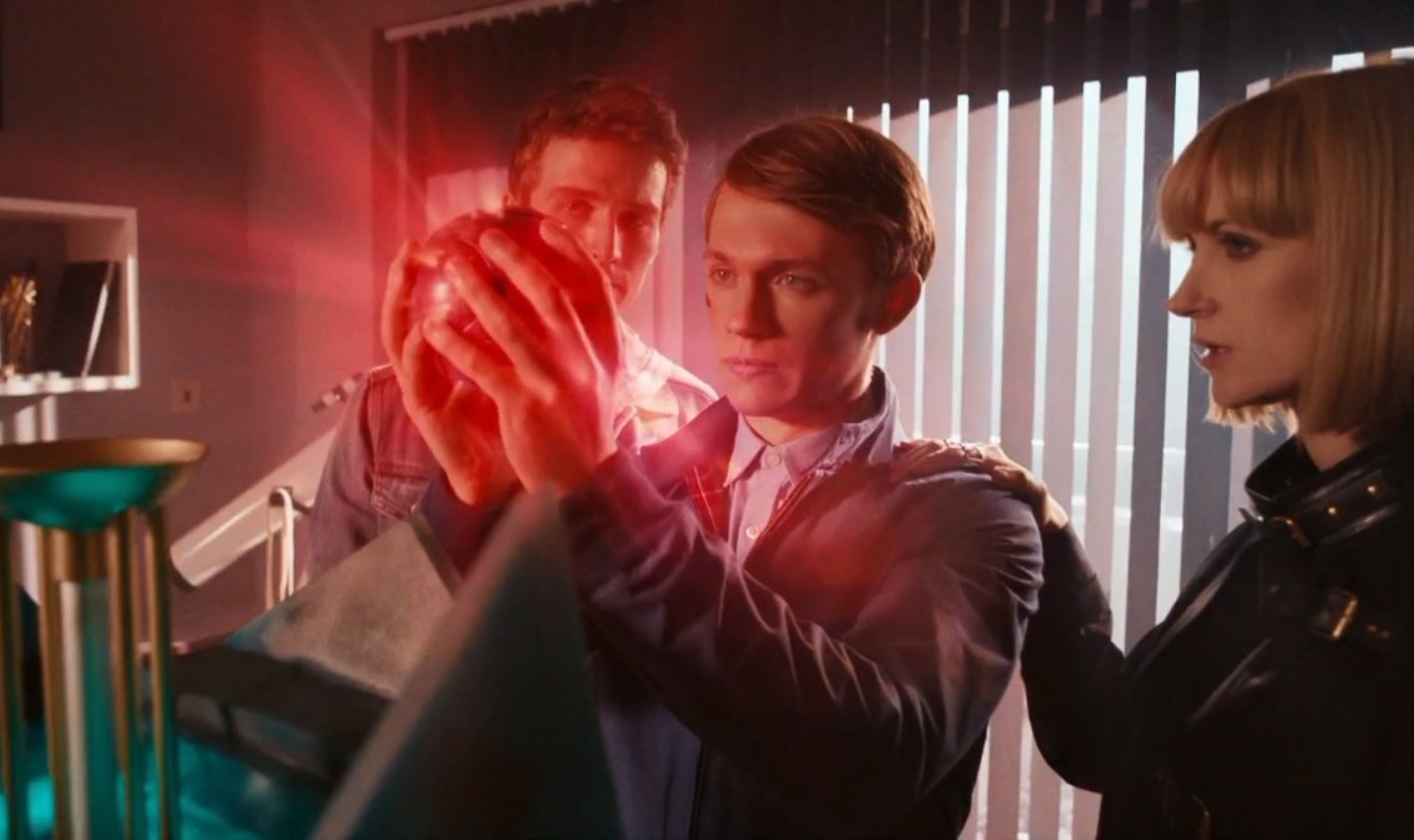 If I were April, I would have slapped Ram at that moment the way Quill slapped Charlie.  In a literal case of 'it hurt me more than it hurt you', Quill suffered slight pain for hitting the one she's forced to protect, but from my perspective, I was cheering her on.  Bonnie Prince Charlie is pretty insufferable: pompous, arrogant, and quite abusive towards Quill or everyone really, his only real positive is that he's Matty's bottom.

Brave-ish Heart could have given Charlie a chance to expand, and it isn't as if Austin didn't give it his all in making Charlie's struggle about using the Cabinet a genuine emotional conflict (even if at 24, he looks considerably older than his equally-aged castmates).  Instead, the resolution came easily.  Patrick Ness could not have allowed Charlie to use the Cabinet of Souls since it's a one-time-only weapon.  Why waste it on petals?

Other parts are unintentionally hilarious, particularly with any of their parents.  A huffy Mr. Singh proclaims "Four children are supposed to fight an ongoing threat?!  It ends.  Today, it ends!"  He does himself one better when Ram comes back from the Underneath.

"If the world is going to end in shadows or in petals, I WANT TO KNOW!"  How Neil got through saying that without bursting into laughter I'll never know.

Again and again, it is astonishing how none of the parents seem genuinely astonished or shocked to be seeing any of this, let alone questioning it.  I've never know a parent that understanding.

In fairness, Brave-ish Heart does have some really good positives.  As always, Kelly's Quill is the only reason to watch.  Not only does she show Quill's shifting loyalties, but she shows a rare vulnerable side.  As the moralistic Matteusz accuses her of being a monster when she wants to use the Cabinet on the Shadow Kin, she explodes in rage and hurt.  She tells him off, screaming in agony that if he'd seen his people killed, he might better judge who is monstrous.

Hopkins did well too for the most part, though seeing her as a Warrior Princess was a stretch.

Even Renzo's Matteusz, who here again is just there to provide Charlie a motivation to use/not use the Cabinet, managed a moment.  Matty knocks Dorothea out, quipping "Even with a gun, you should never turn your back on an angry Pole".  In her defense, it's easy to ignore Matteusz.  Everyone else does.  He pretty much just hangs around, waiting to screw Charlie and nothing else.

At a certain point when Dorothea is holding a gun to Matteusz, I shouted KILL MATTY!  KILL MATTY NOW!

Whatever good is in Brave-ish Heart (Kelly and Quesnel) is undone by Class' poor mix of humor and horror ("It's time for some regicide", April says, confusing Ram and ending with April telling him, "Tanya would have gotten that"), quick resolutions to things, and a pretty laughing series of unfortunate events (the fathers going in to rescue their kids elicited giggles, and isn't it a bit patriarchal to have men do rescuing).

Their Brave-ish Heart is in the right place.  We just don't know where their brain is.

Next Episode: Detained
Posted by Rick at 10:17 AM