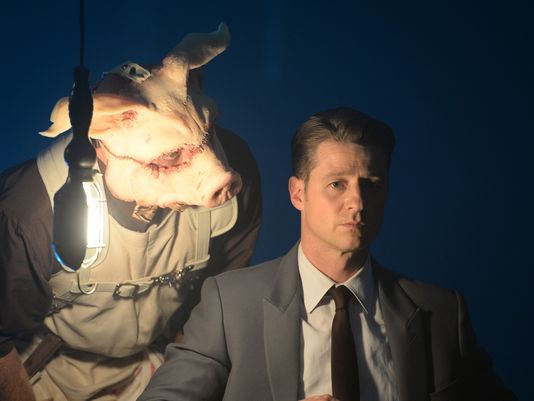 Here is a quick view on Hog Day Afternoon, Episode Six of Gotham Season 4: it has perhaps the lousiest title in all Gotham history (and that includes The Balloonman, which I actually liked).  It also has another man literally blown up, though unlike the last time, it wasn't as graphic.  Hog Day Afternoon already suffers from a lousy title.  It also, to my mind, makes a bad and cliché connection between pigs and police.  Again, not knowing the minutia of Batman lore, Professor Pyg escapes me.

Detective Jim Gordon (Ben McKenzie) hates the idea that there are Gotham City Police Department officers on the take and that the GCPD has to let those with 'criminal licences' from Penguin (Robin Lord Taylor) go free.  It looks like someone else hates this idea too.  A serial killer is targeting crooked cops, killing them and putting a literal pig's head on them.

Let me stop here to say that putting pig heads on police officers, even corrupt ones, does not strike me as the best idea, but to each his own.

Gordon and Captain Harvey Bullock (Donal Logue) manage to find the perpetrator, who in turn has found them.  It is the man the press has dubbed 'Professor Pyg' (Michael Cerveris).  He won't kill Gordon since he's a good cop.  Bullock, however, is another matter.  Pyg slices Bullock's neck just enough to injure him, but he is still in danger.  Gordon also admits what he hasn't wanted to: that Bullock too takes bribes.

In other matters, Oswald/Penguin is still struggling with how he feels about Sofia Falcone (Crystal Reed), the Mob Princess.  He insists to his loyal assassin Victor Zsasz (Anthony Carrigan) that they are not dating, but Pengy is upset about her breaking their lunch 'get-together'.  He's also more upset and angry and paranoid when he learns that Sofia has been holding secret meetings with the Mayor and city officials, as well as buying a dilapidated hotel.  Convinced this is all a plot to overthrow him, he grabs Sofia and plans to kill her at her 'headquarters'.

To his and Zsasz's shock and horror, they find themselves in the newly-build and soon-to-open Falcone School & Home for Orphans.  It looks like rather than try to take over Gotham, our Mob Princess is being a benefactress.  A shamed Pengy begs her forgiveness, and she notes that she already has.

Finally, poor Edward Nygma (Cory Michael Smith) is still determined to return to his intellectual greatness and thinks Dr. Leslie Thompkins (Morena Baccarin) is the one to do it.  She tells him the obvious, 'Why should I care?', but care she does when she sees that the money Nygma has thanks to using Butch Gilzean/Solomon Grundy (Drew Powell) in his cage matches can provide medicine for Thompkins' secret clinic.

She also tells Nygma how she should have been 'blackmailed', a word and idea that he could not come up with, showing just how inept he has become. 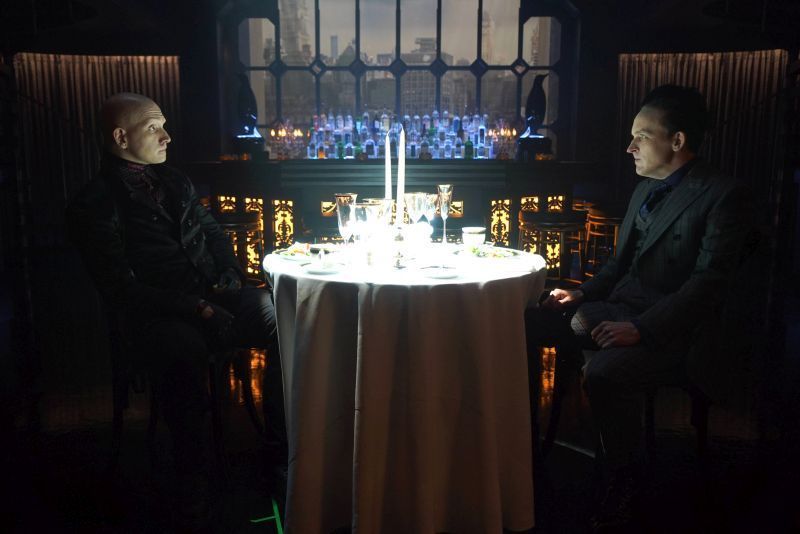 To my surprise, the clear standout in Hog Day Afternoon was none other than...Anthony Carrigan, who continues to make Victor Zsasz less the dangerous master assassin that he is (though he can still be menacing) and more a goofy yet unaware comic figure.  Carrigan's delivery is spot-on as he keeps talking about Pengy's 'dates' with Sofia, and he applies his own logic when he begins to eat the meal Pengy had had for the Mob Princess.

'Would have gone to waste', he remarks to a clearly unamused Penguin.  He says it perfectly straight but with just a hint of wicked humor, as if Zsasz is having a little fun at seeing his Boss having such difficulty with this girl.  It does make one wonder whether Zsasz realizes Penguin's gay.

From my perspective, Pengy is being led to find in Sofia almost a mother figure, because after the long and tortured storyline about how Penguin's sexual/romantic obsession with the straight Nygma led to Nygma's eventual fall, it would be so wildly out-of-place for Penguin to just 'go straight all of a sudden'.

Taylor has always been one of Gotham's best players, and he does not disappoint here.  He creates in Penguin this powerful yet lonely and paranoid figure, seeing threats in every shadow and cloud that passes him.  In that way, he reminds me of Michael Corleone, someone who is the undisputed master of the underworld but who is also quite alone, with no one to love or to love him.

I'm still convinced that Sofia is playing a long game, and that this orphanage thing is somehow a front.  I'm almost to where I think those kids were hired to pretend to be orphans in her plot to overthrow Penguin.  I digress: Taylor's whole performance here, from his paranoia about Sofia's 'plot' to his quiet frustration to make Zsasz understand he isn't 'dating' Sofia (or any woman really) is a fully-rounded one.

It's nice to see Gordon shown as the intelligent figure he is (he quickly fools the 'blind' saxophonist into revealing he can see).  It's also curious that Gordon is shown to be a bit of an idiot (he can't make the connection between 'pigs' and 'cops' when he asks why this killer would put pigs heads on the police on the take).  McKenzie has his good and bad moments, but when he and Logue as Harvey are together as the latter confesses his acts, it's so beautifully done.

I am still not feeling Nygma's storyline, particularly Smith's performance which here struck me as a little campy.  I do hope he gets some of his faculties back because frankly it is all becoming a bit tiresome to me.

Other moments seemed a bit hilarious for my tastes.  "My biggest fan is a pig," Gordon comments when he first meets Professor Pyg, and how McKenzie could deliver that line without breaking out in laughter is a credit to his abilities.  The idea of Gordon managing to fling himself down at least one floor while tied up to save Harvey and not have many if any injuries himself seems a bit outlandish too.

And as for Professor Pyg himself, it's a credit to Cerveris that he doesn't come across as completely ridiculous.  The haughty tone Cerveris gives Professor Pyg, mixed with a genuinely insane set of retribution, makes up for the idea that a man walks around while wearing a severed pig's head on him.

I am a bit surprised that when Officer Nakajima (Jonathan Lee), the bagman in Penguin's payoff scheme, gets blown up, it wasn't as graphic as the last time someone was blown up (Professor Pyg had stuffed a grenade into him and when Gordon removed the pig head, he inadvertently pulled out the pin).  Begs the question why they showed some restraint here that they didn't the last time.

As a side note, two other officers suspected of being the bagman were described by Bullock as 'hard-core Bible thumpers).  Makes me wonder how any active Christian manages to survive in Gotham, let alone the GCPD, but again I digress.

Again, I think there was more good than bad in Hog Day Afternoon.  Still think it's an awful title, but despite my fears, Professor Pyg is not as laughable as I had feared...even if it still makes me slightly chuckle.

Next Episode: A Day in The Narrows