This came to me while watching Let It Fall: Los Angeles 1982-1992, the excellent and gripping documentary covering a tumultuous decade in the City of Angels, one that went from the high of the 1984 Olympic Games to the low of the riots after the Rodney King verdict.

The film refers to them as the 'Uprising', but I've never used that term.  However, given Let It Fall does, I may on occasion refer to the events as an 'uprising'.

The film begins by covering the Los Angeles Police Department's methods on subduing suspects: the Chokehold. This action led to the death of James Mincey, Jr., though sadly, the truth really is in black or white, as Mincey's black then-girlfriend and Mincey's white retired cop remember the exact details but with different interpretations.

Things do not get better when we learn of the killing of Karen Toshima, an up-and-coming Japanese-American caught in the crossfire of gang warfare in an affluent area.  Hearing from Toshima's brother Kevin tears at you, but her death also lead to an increase in police crackdowns, some with shockingly sadistic and destructive aftereffects.

The seeds were getting planted, and growing more dangerous.  The Foothill Incident, the name which LAPD Chief for Life Daryl Gates gave the Rodney King beating, was aggravated by the killing of Latasha Harlins at the hands of Korean store-clerk Soon Ja Du, who received five years probation but no jail time for her act.  The video footage of Harlins' killing is shocking: the quick fall and smoke almost despairing. An already angry African-American community, having seen so many acts by police gone mad, seeing Harlins killed and with no one punished for it, was set to see justice with the four police officers tried for the King beating.  The trial was moved to the less racially diverse Ventura County (prosecutor Terry White suspecting that it was done to make the drive more convenient for the judge).  The jurors were people who were NRA members and with family connections to law enforcement, which to White meant could be trouble.

Even the judge seemed astonished when the predominantly white jury returned not guilty verdicts for the four police officers on April 29, 1992, and, Let If Fall argues, the ensuing decade (or decades) of police actions boiled over into all-out fury.  Violence, murder, looting, and arson broke out, with innocents finding themselves targeted based on the victims not being black.  Among those were the Korean-American community, listening to any and all rumors on Korean-language radio.  The Korean and African-American communities, already on edge after the Du/Harlins trial, now were in literal war: Korean shop-owners firing back with their own weapons.

Five days to get the city under control, we see the people who had been interviewed were not just random citizens, but the mothers, father, brothers, sisters, friends, and officers directly involved, and despite the quarter-century, the wounds perhaps have not healed, just covered. Let It Fall leaves one emotionally wiped out after viewing, and not just because the film runs 144 minutes long.  Director John Ridley makes his case, slowly and methodically: each incident, each situation, tragic on its own, put together made the King Riots inevitable.  The interviews are fascinating in many ways apart from getting each individual's perspective.

We see Ms. Georgina Williams, mother to Damian 'Football' Williams and Mark Jackson, the former one of Reginald Denny's attackers.  Eloquent, elegant, and sincere, Ms. Williams remarks that Mr. Mincey's death reminded her of Emmett Till's killing.  She also remarked that if she had been there on April 29th, her son would not have gone out to attack Mr. Denny.

We also learn that Henry King, one of the jurors in the trial of the four officers, despite his fair skin and blue eyes, is part African-American.  A DNA test, he tells us, shows he is biologically 29% black, and that his father was by his estimation 2/3 African-American, something King knew from the get-go.  Despite his heritage, and the fact that he chose to identify now as black, he still holds that the jury's verdict was correct.  He couldn't find them guilty of something that was not a crime.

If there is a villain in Let It Fall, it is former Police Chief Gates, who was at the most generous tone-deaf to how the LAPD was perceived and how it acted, monstrously indifferent and arrogant at the worst.  A member of the military brought in to restore order recounts that when he first met with Gates, the Police Chief looked him straight in the eye, leaned into him and told him he wasn't needed or wanted.

This as Los Angeles was erupting into mass looting, shootings, burning buildings and total chaos.

Not even the mention from Gates via archival footage that his son had relapsed into drug addiction as the riots were unfolding is enough to humanize someone too far gone to have his reputation restored.

That is, except to certain officers interviewed in Let It Fall, who still think Gates was not a bad person.  Not all the retired officers think Gates' methods were good: they comment on how the fierce enforcement leading to officers trashing homes and not sending officers in to the epicenter of the riots was reprehensible. 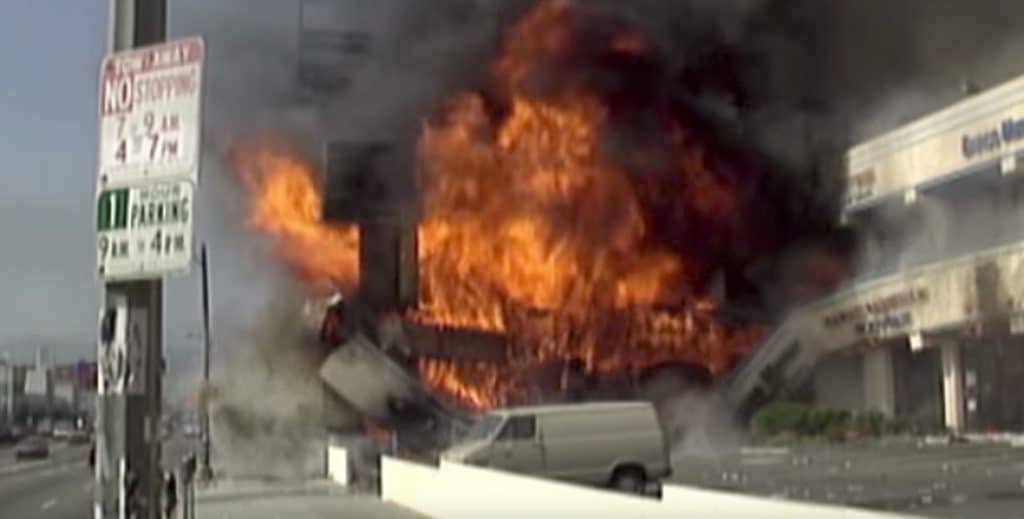 What is in turns fascinating and sad is that all these years the views of those involved have not altered their views on the same events.  King still thinks they made the right decision in the King verdict.  Officers at times appear dismissive (the arresting officer in the Mincey case remarks that Mincey's then-girlfriend was 'supposedly (pregnant) with his baby', as if this detail is unimportant).  Rioters too hold on to an idea that the chaos was not without justification: Henry 'Kiki' Watson, one of the so-called LA 4, (the men who attacked Reginald Denny), angrily comments the only black men America will accept are homosexuals and transients, which strikes me as a highly odd statement.

The archival footage is, again, fascinating and heartbreaking, everything from the shooting of Ms. Toshima to then-Mayor Tom Bradley suggesting rioters stay home and watch The Cosby Show as his city is collapsing.  This verifies another interviewee's comments about the Mayor being a 'distinguished man, but not one in charge'.  The burning buildings, the dead bodies, the killing of Harlins all shock you, but they should shock you.  The riots/uprisings should shock you, and so should how it all came about.

Let It Fall is a document of a true American tragedy, one that culminates with the Rodney King riots but whose seeds were planted long before April 29, 1992.  With no narrator to impart his/her wisdom, Let It Fall lets those directly impacted by the mounting chaos speak their stories, and we learn just how tragic it all has been.  Black, white, Asian...no one got out unscathed, no one got to be the pure victim or perpetrator. It leaves one with a heavy heart, overwhelmed by the needless tragedy of it all: the lives lost, the lives ruined, the antagonism and fear still holding so many.

In a time of growing racial strife, from Ferguson to Charlottesville,  Let It Fall is a voice from the past warning us about how things may be if we do not learn from it.